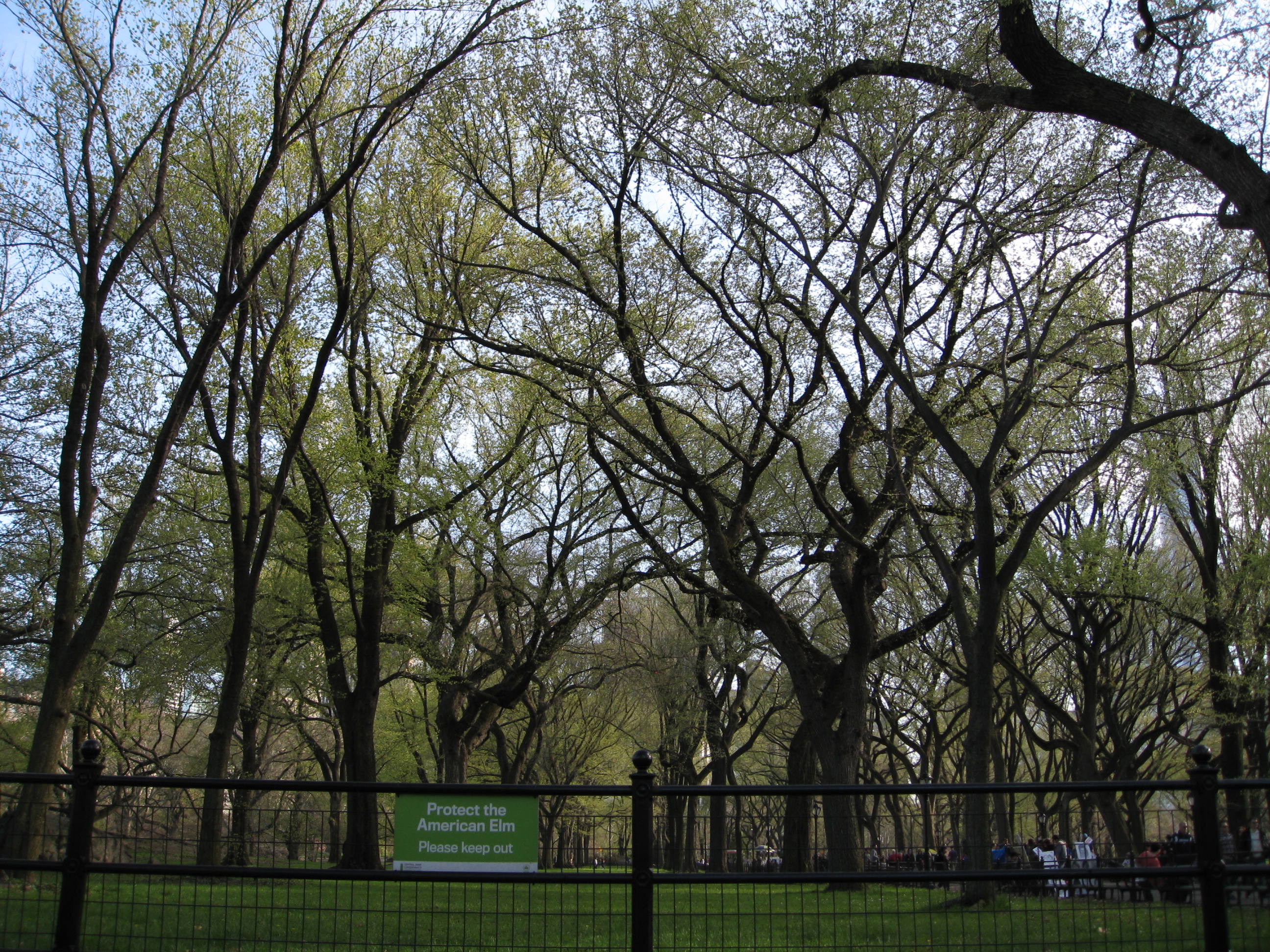 The Shocking Truth: Trees are Electric

My favorite trees in New York City live along the only straight line in Central Park, the Mall. Signs every few hundred feet along the fence that encloses them implore, “Protect the American Elm: Please keep out.”

I wonder how many of the New Yorkers parading by notice the signs. They mark one of the largest remaining troupes of American elms left in the world, trees that have somehow managed to evade Dutch elm disease for a century.

The elms themselves are beautiful, marked by their gracefully twisting branches that look pulled from a Van Gogh. In autumn they burn gold with dying chlorophyll, in winter their branches’ dance is highlighted by a coating of snow, in spring fuzzy lemon-green seedpods brush their canopies, and in summer, when the trees are most vulnerable to disease, emerald leaves mask their meandering branches.

The tangle of branches welcomes you in despite the fence, offering a glimpse of another, more magical world, an overhead swirl of brown and green and blue far above the river of earthbound New Yorkers. In the distance, a few picnickers dot the base of one trunk, not having seen the signs or not knowing what they meant, or perhaps simply not caring.

But the fence. The fence the signs hang on is painted black, unobtrusively simple, thick iron pipes joined by wide wire mesh. It’s an unassuming part of the strategy to bolster the elms against the disease that has killed so many trees already. The aim isn’t to stop the disease, a fungus which hitches a flight into the park on bark beetles. But the fence does keep the trees healthier.

Neil Calvanese, who spent three decades overseeing Central Park’s tree care, remembers what the Mall, also known as Literary Walk for its statues of authors, was like when the Central Park Conservancy was formed in the mid 1980s to take care of the park. “Where you see that pristine grass there on Literary Walk, that was literally a field of mud,” he says. “You literally had concrete under those trees.” And so the Conservancy installed the first fence.

In the soil, after all, is where huge portions of a tree’s life take place — eating minerals, drinking water, communicating with neighbors. In the best soil, half the space isn’t soil at all, it’s pockets of air and water. Those pockets allow roots to lengthen and strengthen, supporting the tree as it grows above the soil. Losing that space makes for stunted tree canopies.

The weight of one person seems like a drop in the bucket next to a mature tree, but my weight and your weight and the weight of all the picnickers and flaneurs and treehuggers in New York City pushes the air out of soil. Below the fence-protected ground, the elms’ roots now have space to eat and drink. That makes them more able to withstand infection if it does arrive.

Today, the elm trunks march in orderly rows up achingly green grass and their canopies stretch across the aisle above New Yorkers’ heads. The wandering limbs erase the careful geometry of the planting and of the city beyond the park’s limits, as if seeking to escape the fence and the rigidities of city life.

Other elms in the city, notably those that line the park’s eastern edge, manage without a barricade, left to ward off human intrusions on their own. And while they lose a hint of their showiness to blend in with straight-laced neighbors, they seem unflustered by the stones shielding their roots or the ice cream truck’s anthem jangling across their leaves. They’re hanging in there, they quietly assure me.

But I appreciate the solid, anchoring feel of the metal bar in front of me at the Mall. As the trees pull me into the daydream realm of a dancing elm forest, the fence pushes me out again, whispering of the challenges the elms face and offering a respite from the battering force of New York City’s footsteps.