City birds in a new light 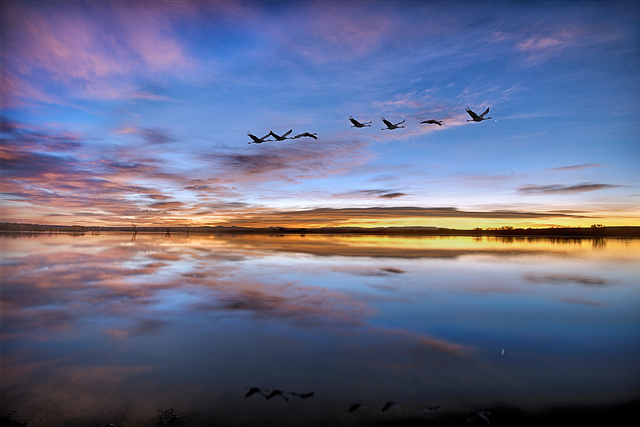 A placid predawn, unlike my own experience. [Image credit: John Fowler, CC-BY-2.0]

I woke up this morning to birdsong.

A chattering acclamation of spring. It began with an insistent chirp, a repeated two-tone phrase, and soon the soloist was joined by a murmur of indistinct warbling.

I foggily lumbered to my second-floor window and drew back the curtains. But I had forgotten my glasses, so I couldn’t see any of the noisemakers. It was just my street of row houses, looking like a blurry jazz album cover in the blue filter of first light. A few weeks ago the trees were like old upturned brooms, but now they’re festooned with cottony blossoms.

I crawled back beneath my covers, and the birds kept singing. At this time of year, the sun rises about an hour earlier than I do and the cacophony of birdsong was louder than seemed possible. I thought about how much I hate birds.

My ceiling is a bland eggshell. I stared at it, wondering at what point I should give up on sleep and just start my day. The symphony entered its second movement. More melodic, with less of the repetitive intensity, but still a whirling mishmash of voices, each on its own time. It also introduced the squeaky-wheel cry of a gull. I sometimes forget how close to the ocean I live.

Finally I began listening carefully, and only then became aware of the sound of traffic. It’s always there, though. I made a recording from my bed, and mostly what you hear is the white noise of tires on pavement. There’s the occasional thrum and release from a truck working its way out of a stop, or the clank of a loose grate when driven over just so. But it’s very difficult to make out the birdsong, which had come through so clearly in the moment.

Maybe I’ve just become inured to the background noise of the city. The crash of waves that never recede. I’ve lived in urban areas all my life, and it’s only when I venture outside of their limits that I’m kept awake by the soundscape of night: the chirp of crickets or howl of coyotes.

I blithely ignore the sounds of construction and bristle at the sounds of nature. People can get used to all kinds of garbage. I guess the birds can too.