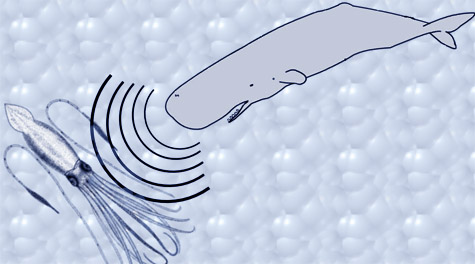 ** Editor’s Note: The staff of Scienceline is taking a short break to work on future stories. In the meantime, we will repost some of the site’s most popular articles from the last six months. We will return to publishing new content on May 19. This article originally appeared Jan. 7.

The giant squid is real, but stories of sperm whales wielding blasts of sound to impair them may be nothing more than a fairy tale. Scientists have long known that giant squid are a major source of food for the even larger sperm whales, which have been found beached with sucker-mark battle scars across their skin and monster-like tentacles in their stomachs. Regardless, how these giant whales snag their various forms of nimble prey has puzzled biologists for decades.

Sperm whales have the world’s largest biological sound machine housed within their 10-ton heads. The idea of the “acoustic prey debilitation hypothesis” (also more charmingly called the “Big Bang Theory”) was first mentioned in a science magazine in 1963 and was the subject of a key review article by Kenneth S. Norris and Bertel Mohl in 1983.

The word “debilitation” is appropriately vague. The sheer power of a sound wave can cause physical damage, like hemorrhaging. Or a sound could possibly confuse or disorient prey instead.

Whales, dolphins, bats and several other animals navigate via a process called echolocation, which is similar to submarines using sonar. Animals produce loud noises that bounce off nearby objects, giving an acoustic picture of their surroundings. It’s these types of powerful sounds that scientists thought might be tweaked into a deadly weapon.

Some marine mammals make ultrasonic noises which are too high in frequency to be heard by people. These sounds were a good candidate for prey debilitation because they’re more likely to produce shock waves, which can cause bodily injury.

In a perfect world, we’d just slap some cameras and lighting onto sperm whales, watch them dive deep beneath the surface and then see the battles unfold. Although these attempts are ongoing, a lot of what we know comes from experiments. Recently, two independent groups recorded whales with underwater microphones and then played these ultrasonic sounds at the appropriate volume for a pool of prey. It seems that the sperm whale “Big Bang” hypothesis was alive and kicking until these studies, which found no evidence of any such thing.

“This was a lovely idea killed by data,” said Peter Tyack, a senior scientist at Woods Hole Oceanographic Institution in Massachusetts, by e-mail. He co-wrote one of the two recent papers showing that these ultrasonic noises didn’t affect squid or fish.

“The prey continue[d] unaffected in any way as far as we can tell,” said Peter Madsen, an authority on whale acoustics and professor of zoophysiology at the University of Aarhus in Denmark, who collaborated on Tyack’s study.

So ultrasound as a weapon is out. But there is a loophole. Sperm whales make some other powerful sounds that weren’t tested. These other noises are within the range of human hearing and much lower in frequency than the ones used in the two studies. However, researchers disagree on whether it’s still worth testing the hypothesis that sperm whales are sonically armed and dangerous.

“I don’t think we should pitch out [the] theory just yet,” said Ted Cranford, a sperm whale anatomist and professor of biology at San Diego State University. “It might be pretty easy for the sperm whale to overload the sensory system of some critter.”

He believes that sperm whales’ low clicking sounds could be capable of disorienting prey by overloading their senses, rather than through physical harm. Although only one-thousandth to one-hundredth of a second long, this split-second blast could freak out a fish long enough for it to forget to dart away. Whales’ low clicks also last at least a thousand times longer in duration than the ultrasonic ones tested in the tank studies. And lower frequencies travel farther in water than higher ones, as well.

However, some data suggest that the whales are just using these clicks for navigation, rather than for harm.

“We have tagged more than 50 sperm whales [with sound recorders],” said Madsen. “All data up to date suggest that sperm whales use such [powerful] levels only when prey is far from the whale.” When they swim closer, they need quicker updates in order to find their prey. They have to sacrifice the power of their clicks in order to produce a higher-rate buzzing (listen to the clicks and buzzes at the top of this webpage). This sound pattern resembles echolocation in other animals, which initially search for prey at long distances and then make quieter noises as they approach for the kill.

Those who hold out hope that the noises could be a weapon note that we’ll never know for sure until all sperm whale sounds are tested via the tank method.

Cranford “may be perfectly right,” commented Magnus Wahlberg, a whale sound specialist and chief scientist at Fjord & Baelt aquarium in Denmark, via e-mail. “It needs to be tested, though.”

So, if you believe that sperm whales might impair giant squid with sound, you aren’t alone. But for the most part it looks like the “Big Bang” hypothesis for sperm whales is dead in the water.

Wow, all the things I never knew about sperm whales and giant squids! Are there any theories as to how the sperm whales are killing their prey if it isn’t through sonar?

It should maybe have been noted, here, that sperm whales are known to actually survive and thrive despite drastic damage to their lower jaws. An adult whale can even lose the mandible, there — on which its few, peg-like teeth grow — and still continue to eat.

That’s one of the reasons for which this idea has been out there for so long. If they’re not clamping their jaws down on their prey, how exactly *are* the sperm whales getting squid that are often 30+ feet long into their mouths?

(Oh, and also: sperm whales are the largest predators known to have existed on planet earth. Barring larger “rorqual” whales like the blue, which plankton feed by filtering, that is. We’re talking about the biggest predator we’ve got evidence of, period.)

Theories for that aren’t needed. We already know they have a row of massive sharp teeth. They bite their prey to death. Some of them they probably ram and break their spines if they have them. (Squids don’t, so they probably just get bitten to death).

If you have never experienced it you will deny it. I felt a sensation similar to a static shock touch, it was how ever internal. At most it was distracting, but not debilitating. Recently captured tursiops from the Mississippi sound. I was in the water when the partner of an ailing animal let off intense echolocation followed by an internal pop.

I agree with Scott. The burst of sound, and how you feel it through your body is super directional. You only FEEL the sound through your body when the barrel of the surprisingly thin head is pointed right at you. And then, even coda is overwhelming. No one who has experienced this would doubt that a big male hitting you with deliberate blasts could incapacitate. My partner in Dominica got in between a male and his beau and got blasted. He described it as ‘the worst pain he has ever experienced’, and he was left hanging in the water like a big ball of jelly. Sorry science…

It’s said that a sperm whale can put out “clicks” upwards of 170-230 db. Even without any test.. the sound threshold of someone’s eardrums is around 150db…and thats decimating them to complete deafness. Decibels are measured logarithmically,every 3db is essentially 2x as loud. A rocket launch is 170db (ish) …sound is measured differently inside and outside of the water as the water is more compact and therefor has a higher threshold for sound. A 230db click from a sperm whale is more like 170 in open air. A human being can suffer internal organ damage and death at 170-180db.

A whale clicking at you (full blast which is rare) can virtually liquefy your organs. People report being near them and feeling the immense power hitting their body like a shock wave internally. And their bodies actually feeling very warm or hot. This is from the shear magnitude of the sound waves heating up your body.

Replaying a sound isn’t the same it being raw in nature. No speaker will produce the sound at a level a sperm whale can produce…and the frequency reproduction of a speaker does not mimic a natural environment or spectrum. You dont need an experiment to prove or disprove whether a whale can talk you to death if you know that it can produce 170-230db because science already knows what threshold a human being can take…

Will 230db (up close) disorient a larger tougher animal that has extremely sensitive sensory perception? …Yes…whether it can kill them or cook them from shear sound waves…not so sure but that level of sound hitting you is like a crane falling on you.