My dad wants to cut down 20 acres of trees. Should I let him? 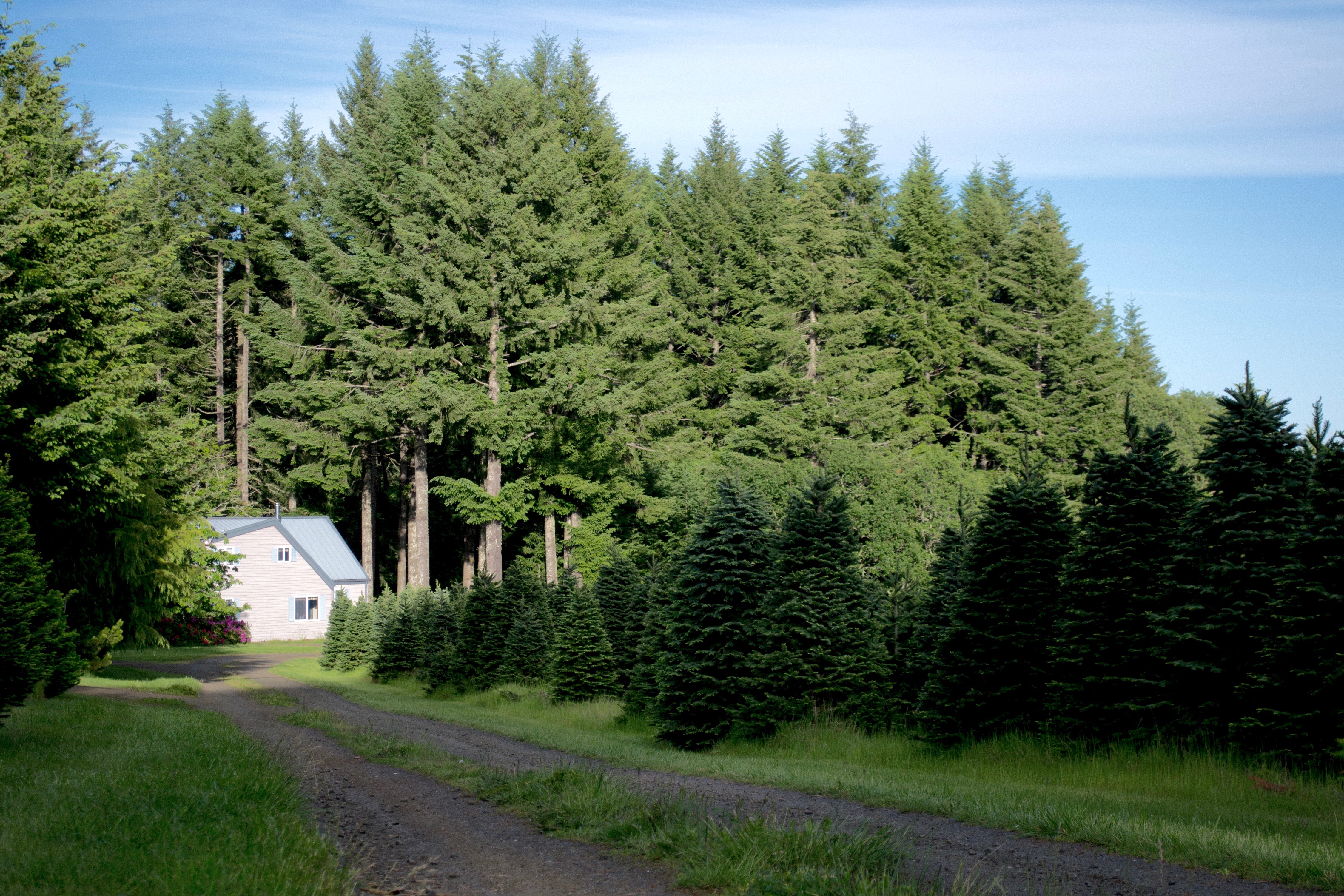 A forest stands tall one week, conifers reaching toward the sun with fringed fingers while ferns and shrubs carpet the cool forest floor below. The next week, the forest is gone — replaced with stumps and a tangle of vegetation. Sunlight streams to the ground unfettered. Small tree seedlings poke their bright green leader branches out of the brush.

This is a common sight in the foothills of the Coast Range in Oregon. Any of the ancient firs that once thrived on these hills were felled around the turn of the 20th century, and the trees felled today were likely planted by human hands. Swaths of forest, on hillsides and in valleys, are cut down all at once in a flurry of chainsaws and log trucks, for telephone poles, lumber and plywood. These dramatic clearcuts have been controversial in the Pacific Northwest for decades.

So when my dad recently told me he’d be clearcutting the 20 acres of Douglas-fir timber behind the house where I grew up, I got a little uneasy. Clearcuts on nearby hillsides are scenes I’m used to driving past. But a clearcut on our hillside? Clearcuts have sparked heated debates and motivated activists to chain themselves to trees. I’d remained neutral on clearcuts for years, and I’d mostly ignored all the uproar in the past, but I realized I couldn’t be neutral any more. I was going to have to have a conversation with my dad about the future of our trees. But first, it was time to find out what the science said.

I first spoke with Jason Barker, an ecologist at the University of British Columbia. “I hesitate before making widespread, sweeping generalizations,” he warned me, but then he went on: “There are a few relative certainties in the debate about clearcutting.” At this point, he said, just about everyone agrees that clearcutting on a hillside or in an area with poor soil quality is a bad idea.

Indiscriminately cutting down all the trees on a hillside leaves soil in a precarious position. Even with replanting, erosion is a serious concern. Heavy rains strip away the topsoil (and any lingering chemicals like fertilizers or chainsaw oil), carrying it down the hillside and into streams that may be home to salmon and other important fish species.

The soil quality before the rains come is important, too. “If you have an area that’s classified as poor soil, you’re taking a much bigger risk if you decide to clearcut,” Barker said. Poor soil means fewer nutrients and less biodiversity among the denizens of the dirt, like fungi and insects. And that can mean a slow regeneration. Oregon law requires land owners to replant two trees for every one they cut down, but if they don’t have good soil to grow in, the forest takes longer to bounce back.

The forest I trekked through as a child is perched on a hillside with a spring and creek at the bottom. In some areas, the hill’s slope is gentle and easy, but would the steeper areas be good areas to clearcut? As far as I know, our soil quality is decent, but would it all wash away into the stream during the first big rainstorm if we clearcut?

I also wondered where wildlife would live after all the trees were gone. Barker noted that the complexity of the surrounding landscape is really important when it comes to wildlife, such as elk, bears, birds and small rodents. “Some wildlife and critters are going to like hanging out in the clearcut or accessing the clearcut,” he said, but only if there’s young vegetation they can eat. Other species, such as the spotted owl, prefer older vegetation, like mature trees, and will make their way to another patch of forest nearby. As long as our clearcut isn’t surrounded by other clearcuts, wildlife will have somewhere to go.

“There’s definitely risk in harvesting” the wood, Baker said. “And no amount of careful planning can make that risk go to zero.” A particularly dry year after replanting could make it hard for the young planted trees to grow, or a particularly rainy year could wash away more soil than expected. Nature will always be the biggest variable. But Barker said good management was an important factor, too. “If you have a good owner, I think that counts for a lot.”

That was reassuring to hear. A lot of the time, it feels like so many variables are out of a landowner’s control. Weather, fire and pests are constant threats, and the best anyone can do is make careful decisions. It’s always been clear to me that my father cares deeply about our forest and the outdoors, and I know he’s always strived to make the best management decisions.

Stephen Fitzgerald, a forester for Oregon State University’s Extension Service and the manager of OSU’s research forest, views forestry as a social science. “It comes down to values,” he said. “If you had a plot of land and brought in ten different people, there’d be ten different ideas on how to manage a piece of ground.” I would never find a purely objective answer about clearcutting on our property. “Your dad is operating with a set of values that are objectives that he has.” He added, with a knowing tone, “It sounds like you have some other values you want to impose.”

He wasn’t totally wrong. I wondered what it would take to let the forest become an old-growth stand and simply be wildlife habitat. It seemed like a decent alternative to clearcutting. Fitzgerald pointed out that different species require different management decisions, but he offered up the example of managing for pileated woodpeckers. They like bigger trees to nest in, especially trees larger than 20 inches in diameter. “It doesn’t matter to a pileated wood pecker whether that 20 inches is 100 years old, or 50 years old,” he said. A land owner can speed up the process and get bigger trees faster by carefully thinning a forest. “You can make these stands have premature grey hair.” But some forest characteristics can only develop with the passage of time, so without a specific species in mind, letting the forest sit might not really help wildlife significantly.

Managing for wildlife requires more than just letting the trees grow unattended, and clearcutting requires careful planning and replanting. Either way, an active land owner is imperative. Our stand of trees is mostly surrounded by other mature stands of timber and Christmas trees, so wildlife has somewhere to go. By clearcutting our stand, we would help diversify the forest ages, providing habitat for species that like young forests.

After all that, I sat down with my dad to talk about the future of the forest I grew up loving. He admitted that it was a tough decision for him to make. “I kind of feel bad that I’m going to change the environment back there,” he said. But that change is necessary in my dad’s eyes. “It is a tree farm so you need to manage it and this is part of the management plan. I don’t view a clear cut as really a permanent thing. You replant.” The seemingly constant Oregon rain also makes the decision a little easier for him, because trees grow pretty quickly here. “It’ll be harvestable in your lifetime,” he said. “That’s the cycle of a tree farm.”

Ultimately, that’s what our property really is: a tree farm, all 36 acres of it. Cutting down 20 acres of trees and leaving is unsustainable. Cutting down 20 acres of trees and replanting and carefully managing the forest is the next logical, and sustainable, step for our tree farm. And if I decide to leave the next generation of trees to the birds, like the pileated woodpecker and the spotted owl, I can carefully manage the forest based on my own values.

Growing up on a tree farm, sometimes you measure time in tree rings. The year I graduated from high school is eight pairs of light and dark rings from the outer bark. The year my family moved to the farm is another fifteen paired rings closer to the center. Soon, I’ll have plenty of stumps to count rings on, and a better view of Mt. Hood. The view will be bittersweet, a stark reminder of the loss of the trees that towered over me since childhood. But before long, the next generation of Douglas-firs will block it as they ascend to the sun.

Hopefully, you Dad has a basis in the timber that he plans to harvest. It is critically important that he use the appropriate tax laws in order to take advantage of capital gains taxes, verses income taxes. If you and he are not sure, it is more than worth the investment in the services of a professional forester and qualified tax accountant who understands forest taxation.