Airborne dust is a climate force to be reckoned with — only scientists aren’t sure whether it’s helping cool down or warm up the planet. 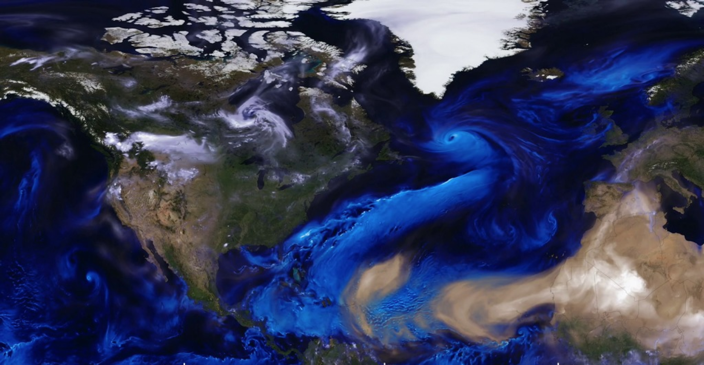 Imagine you’re an astronaut, watching the Earth from space. There are no seasons where you are but back home, in the northern hemisphere, it’s mid-summer. As you watch clouds float across the planet’s surface, you notice something obscuring the northwest coast of Africa. In fact, giant red-brown plumes stream off the continent. The plumes swirl in airborne eddies over the ocean and reach thin, brown fingers over the Caribbean, brushing the east coast of Mexico. The plume is mesmerizing to watch — but what is it?

This airborne dust — tiny pieces of dirt smaller than the width of a human hair — does more than paint eddies in the sky. It fertilizes life in the oceans, melts snow, spreads pathogens and helps form ice in clouds. At any one time, there are about 10 million tons of dust in the atmosphere. All that dust almost certainly affects the planet’s temperature — but scientists aren’t sure whether dust helps cool things down or heat things up. To forecast the planet’s future more accurately, and better understand the impacts of global climate change, scientists have to dig deeper into dust.

In early February, NASA announced it is doing just that by investing in new technology to solve this riddle. The project, called the Earth Surface Mineral Dust Source Investigation, will essentially be a “box with a telescope” hanging off the International Space Station, says Robert Green, the principal investigator and senior research scientist at NASA’s Jet Propulsion Laboratory. The telescope will compare and contrast how different colors of light bounce off Earth’s surface. By observing how the various shades bounce off different soils, Green will be able to determine the minerals that compose them. Knowing mineral makeup is key to understanding how dirt particles behave when they get lifted into the atmosphere.

The project’s rocket launch won’t happen until at least 2022. In the meantime, scientists will continue building on work that started in the middle of the ocean 80 years ago.

In the early 1960s, no one suspected dust from one continent could travel across the globe and affect the ecosystem of another. At the time, scientists were more focused on catching dust from outer space, which, thanks to a false interpretation of data from early satellites, people thought rained constantly on Earth’s atmosphere. “There were more papers on Mars dust than African dust in those days,” says Joseph Prospero, a leading dust aerosol researcher with the University of Miami. Prospero moved to Miami in 1963 to study the chemical makeup of droplets of seawater floating airborne above the Atlantic Ocean. The aerosols contained more than just saltwater — but he couldn’t figure out where the other minerals came from.

He got his answer from two English scientists who had gone to Barbados to take advantage of the island’s pristine air in the hopes of capturing cosmic dust. Instead of capturing bits of meteorites, the scientists filtered heaps of reddish dirt. The air wasn’t pristine at all — it was downright dirty. Because the trade winds blow from east to west, the scientists reasoned the dust came from the Sahara and Sahel regions in Africa. This turned out to be right, confirmed by Prospero’s later work tracing radioactive isotopes and high resolution satellite images.

While the finding was interesting and unexpected, this did nothing for the cosmic dust experiment. The English scientists turned the facility over to Prospero who has been monitoring dust crossing the Atlantic ever since. He says at least 50 percent of the dust in the atmosphere comes from the African continent (estimates go as high as 70 percent). Right now, Prospero is studying how this dust travels to the Amazon Basin, providing nutrients for one of the lushest ecosystems in the world.

Field work from scientists like Prospero, along with satellite images and data, have built a fairly clear picture of how dust circles the globe. One of the beneficiaries of this data — and a hopeful beneficiary of Green’s space-bound device — is NASA climate scientist Ron Miller. Miller is quick to redirect the conversation away from himself and toward his colleagues but he has been at the forefront of turning field observations of dust into better computer models showing how dust interacts with atmosphere, ocean and land. “I was always interested in atmospheric science and weather, which is weird to say as a kid from Southern California where we really have no weather,” Miller laughs.

To understand the collective effect of 10 million tons of dust on the atmosphere, Miller turns data and field observations into digital climate models that mimic the real Earth. Scientists use these models to peer into the planet’s possible future and answer complicated questions like what happens if the atmosphere holds on to too much carbon dioxide? What happens if certain Antarctic glaciers melt? Will there be more or less dust in the future atmosphere? And does that dust cool down or warm up the atmosphere?

All kinds of factors play into answering this last question. The amount of dust in the atmosphere, where it comes from and where it’s going changes from year to year, season to season and hour to hour. Wind speeds, land use and even rainfall patterns all affect how much dust ends up in the air at a given time. Miller and his team try to account for this complexity in their models to understand broad trends and identify important patterns.

While scientists have a good idea of where dust comes from regionally — the deserts of Africa and Asia produce a lot of the dust that circulates the globe, according to Sarah Aciego, an adjunct professor of geology and geophysics at the University of Wyoming — they aren’t sure where exactly dust comes from at a local level. The soils of each dune or ancient lakebed or parched field could have a different mineral makeup.

Zooming in on the mineral makeup of dust is critical to figuring out whether dust is helping cool or warm the planet. Specifically, Miller and other scientists are focusing in on hematite. A rust-like element, hematite is a fairly common mineral that appears as “little flecks” on or within a tiny piece of dust, Miller says. Dust particles made entirely of clay or quartz reflect visible light from the sun back into space, which has a collective cooling effect. Dust particles with tiny pieces of hematite, however, will absorb some of this light, keeping heat here on Earth. The size of the particles (smaller particles are better at absorbing visible light, according to Miller) and where the dust is can also influence how much heat dust traps in our atmosphere. If a hematite-laced dust layer floats over a bright surface like snow, it absorbs heat not just from the sun above but also from the sunlight reflected off the surface below.

This is why Green’s new device will focus on cataloguing the mineral content of the world’s soils, especially in places like northern Africa known to generate a lot of dust. The more hematite in these soils, the more likely it is that dust clouds coming from those places will have an overall warming effect on the planet.

Without hematite, dust could have a collective cooling effect. By looking at ice cores from around the last ice age, a study published in the Proceedings of the National Academy of Sciences reports that more dust in the atmosphere corresponded with a drop in global temperatures. Researchers believe the dust clouds reflected sunlight back into space and fertilized the oceans with iron. With all the extra nutrients, phytoplankton — currently responsible for about half the oxygen we breathe — went crazy, sucking up heat-trapping carbon dioxide and causing atmospheric levels to drop around the planet.

The amount of dust in the atmosphere has fallen slightly over the last 30 years, says Daniel Tong, a professor in the Center for Spatial Science and Systems at George Mason University. Studies show this is likely due to more heavy rains in northern Africa and central Asia. This dip, if sustained, could have its own consequences for global temperatures.

Miller acknowledges that dust’s effect on climate is weak and difficult to detect compared with, say, power plant emissions or deforestation. Once upon a time it was difficult to tease out how carbon dioxide influenced the global atmosphere as well, he says, given all the natural variability in the Earth’s climate. Now we know more carbon dioxide means a warmer atmosphere.

As we learn more about dust, we should be able to label it friend or foe in the struggle against climate change. In four years, Green’s new tech will hopefully be mounted on the International Space Station, watching the dust storms swirl from China to Hawaii, from Australia out into the Pacific Ocean and from northern Africa to Mexico. Using its mechanical eye, the device will read the mineral composition of Earth’s soils, beaming this information back to Earth to be used like a cypher to unlock dust’s climate secrets.