We may never know for sure what happened to woolly mammoths, but there are a few ideas to ponder. [Credit: Beth Zaiken | CC by-nc-nd 4.0]

That is the question facing researchers wrestling with one of the oldest and biggest mysteries in extinction science: Who, or what, killed all the giant Ice Age animals about 11,000 years ago?

There are three major theories —  but no consensus yet, explained mammalogy curator Ross MacPhee at a recent SciCafe event at the American Museum of Natural History.

Wearing a black jacket, a dark gray hoodie and maroon pants, MacPhee spoke in front of a colorful backdrop depicting giant elephant birds, giant goanna (related to the Komodo dragon) and giant armadillos from the Pleistocene Epoch, which spanned from 2.6 million to about 11,700 years ago.

Overkill, MacPhee says, is the theory most people are aware of: Humans hunted dozens of megafauna — mammoths, mastodons, saber-toothed tigers and many almost mythical giant creatures — into extinction. But there’s no archaeological evidence to support the idea, such as sites demonstrating that people not only lived near the large animals, but also interacted with them.

“Where are the bodies?” MacPhee asked the audience at the December event.

Proponents of the theory, though, say lack of evidence is the evidence. Extinction occurred too quickly for remains to be buried, according to a September 2018 paper published in the journal Ecology and Evolution that summarizes the overkill theory and its critiques.

Supporters of the overchill theory, on the other hand, believe a cold spell wiped out many large prehistoric animal species. During an ice age, so much fresh water was  locked up in ice that sea levels dropped precipitously and temperature zones changed. This caused changes in vegetation and the eventual demise of the megafauna, MacPhee said at the event.

But our planet experienced 22 ice advances and retreats in the last 2.6 million years, all of which the large animals had survived — including the last big ice event a few thousand years before the extinction actually happened. “The Big Ice Age, which you would think would have been responsible for these extinctions, was over and done with by about 18,000 years ago,” MacPhee said.

Further critiquing the overchill theory, he questions why, then, animals only began to die off when the planet had already started warming, therefore becoming more habitable. Proponents of the overchill theory, he said at the talk, “don’t have a great answer to how climate change by itself could have produced … the collapse of the fauna in the very short period — maybe no longer than 400 years, roughly 11,000 to 12,000 years ago.”

Lastly there’s overgrill, a theory suggesting that an asteroid impact from outer space may have set off wildfires and kicked up ash that killed swaths of animals. However this theory is not without its own problems: It doesn’t explain why the decimation of megafauna populations did not spread out evenly from a singular site. “South America lost just as many animals as we did here in North America,” MacPhee said at the talk. But in the middle between the two continents, or at the same points of latitude across the globe in North Africa, there weren’t any losses, he added.

Though MacPhee points out the holes in each one of these theories, he doesn’t settle on any one that he finds most convincing, but instead urges people to keep an open mind. “Like a lot of historically-oriented debates in biology, there’s often really not enough information available in the kinds of things that we can look at to come to a definitive conclusion,” he said in an interview with Scienceline. “Rather than automatically blaming people for all of the losses that occurred in the last 50,000 years, think about it more broadly and think about other possible mechanisms.”

MacPhee’s new book, End of the Megafauna, is a “a crystallization of his long research and his personal quest to solve the mysteries of extinction,” wrote fellow paleontologist Alexandra van der Geer in an email. 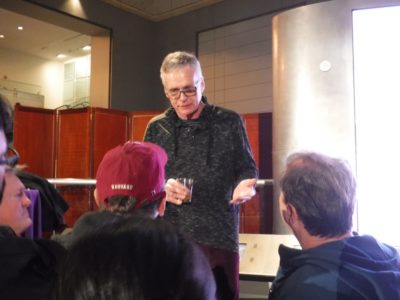 Today megafauna face even more dire extinction threats than their prehistoric predecessors: The animals are smaller and thus more vulnerable to human hunters, who, in turn, became much more dangerous and effective hunters, according to Van der Geer, a postdoctoral researcher at Naturalis Biodiversity Center in the Netherlands who recently co-authored a study of modern-day extinctions of large island animals. A third factor, she said in an email interview, is that humans move all over the planet and carry pathogens and insect pests with them wherever they go. “With all our travel and transport, we have spread diseases and pest animals worldwide to accelerate our impact even more,” she wrote. Because today’s large animals evolved over millions of years, “to let them go and slip through our fingers is an immeasurable loss we’ll never be able to pay back.”

To MacPhee, dealing with extinction in the present day comes down to two options — ignore it or be proactive. “You have to be optimistic about the capacity of humans to solve the problems that they generated,” he told Scienceline. Prehistoric megafauna extinction teaches us that loss of species is part of life on Earth, MacPhee says, but the danger lies in allowing humans to be the main instigator.

“We need to look at prehistoric extinctions to see whether this is actually part of what it means to be human to destroy everything in one’s environment,” he said. MacPhee doesn’t believe so — and he thinks science is the solution. “The only way out of this problem is through science and being very clear on cause and effect relationships as to why things disappear.”

In light of current events I think pathogens is a good answer. However I’m just a History major not Biological History.