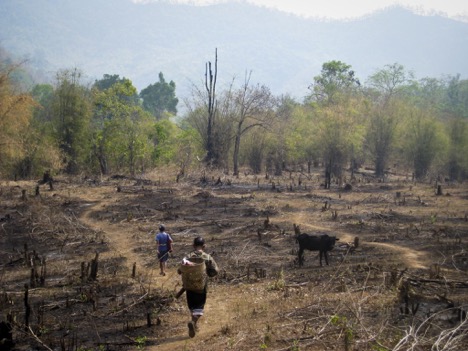 Burning forest for farmland, as seen here in modern Thailand, is an ancient practice that may have changed the makeup of the atmosphere long ago. Picture courtesy of Matt Mangum | (CC 2.0)

Watching the clouds go by

This picture describes both the modern world and the prehistoric one, according to research from recent years. Multiple lines of evidence have revealed a bustling, pre-industrial society that made sweeping changes to its environment, leaving behind signs for modern geographers and climatologists to argue about. Did clearing forests release a lot of carbon or a little? Did rice farming dump extra methane into the atmosphere? The debate may seem esoteric, but understanding how early humans changed the planet is essential for putting today’s upheaval into context. In a nutshell, the thinking that humanity’s impact starts from the Industrial Revolution may be too simple a story.

“If we estimate that most changes to the biosphere only occurred during the last century or so, you end up with a very different sort of understanding of where we are today,” says Jed Kaplan, a land use researcher at Oxford University’s Environmental Change Institute.

Thousands of years ago, as agriculture spread and forests burned, the number of carbon molecules in the atmosphere rose by about 20 parts per million (ppm). The swell in carbon was modest compared with today’s spike of 120 ppm, but it was enough to catch the attention of modern scientists when they spotted the change in ancient air bubbles trapped deep within Antarctic ice.

One such dubious climatologist, William Ruddiman of the University of Virginia, thought the time frame couldn’t be mere coincidence. In 2003, he proposed that early humans jump-started climate change by clearing land for farms some 7,000 years before factory emissions would accelerate the rise in carbon dioxide and methane. This paradigm-shifting hypothesis sparked a messy debate over the origins of human-induced climate change that continues today.

Evidence keeps “pouring in,” Ruddiman asserts. He rattles off a list of land use models, archeological surveys and pollen studies that he says all point to that same conclusion: Agricultural societies bloomed fast and early, stripping up to ten times more land than previous studies had estimated and occupying more than one percent of the planet by 6,000 BC. However, numerous critics see a different story written in the same ice cores that inspired his theory. “The numbers just don’t add up,” says Jeff Severinghaus, a geochemist at the Scripps Institution of Oceanography, who argues that the atmospheric effect of pre-industrial human carbon emissions is basically negligible. “That’s the real nail in the coffin.”

Today, many paleoclimatologists can agree on two things. The first is that the spread of rice paddies across Asia could easily explain the rise in atmospheric methane seen over the last 5,000 years. Bacteria deprived of oxygen produce methane during digestion, and the flooded fields needed to grow rice created just such conditions. Additional flatulence from livestock probably contributed to methane emissions too. The relatively conservative International Panel on Climate Change (IPCC) calls this scenario “as likely as not,” and even Severinghaus, a skeptic of Ruddiman’s overall hypothesis, says it’s “almost certain.”

Researchers also agree that pre-industrial humans burned a lot of trees while clearing land for farming, releasing their stores of carbon into the atmosphere. Today’s plant cover is likely half of what it would have been had human civilization not so thoroughly carpeted the planet– and the carbon that those lost trees and bushes could have kept locked up now wafts about the atmosphere, accounting for up to 15 ppm of additional carbon dioxide according to a 2017 estimate. Contrasting the amount of tree pollen with grass pollen in ancient peat bogs and lake bottoms suggests that by 5,000 years ago, one-fifth of the planet’s deciduous forest losses had already taken place. By then, there were only a few million early farmers, but rudimentary technology made their land use highly inefficient, even by medieval standards.

So did prehistoric humans burn enough trees to noticeably raise the atmosphere’s carbon count? Many climatologists say yes, if only barely. Severinghaus can stomach a human-induced rise of “one to two [ppm] at the very most,” while the IPCC calls the idea of significant early human influence “unlikely.”

Meanwhile, an interdisciplinary community of archeologists, pollen counters, and land-use modelers is converging on a different result. “We’re talking about 20 ppm maximum,” says Kaplan. He doesn’t dispute that natural processes like glacial melting also played a big role, but suggests it would be foolish to completely discount the rapid expansion of early humans.

Geochemists like Severinghaus point out that the balance of ocean carbon and land carbon in the ice cores has held steady, which they assert implies that large carbon bursts from the land (where humans farm) never happened. But that argument doesn’t convince geographers. “Usually the simplest explanation is the correct one,” Kaplan says, “but when it comes to the global carbon cycle, the more we learn about it, the more we realize that it defies simple explanation.” That carbon balance tracks only the net change, he explains, so processes that suck up land carbon such as peat growth and erosion could have wiped clean the fingerprints of deforestation.

Some researchers also question whether the 20 ppm rise in carbon is truly unique. While ice cores show falling carbon counts between most of the eight recorded ice ages, at least one of these interglacial periods features rising carbon concentrations similar to our own. The cycles often differ because Earth’s orbit wobbles and bends, affecting how much sunlight reaches the planet’s surface. Severinghaus argues that weaker sunlight melting less glacial ice is enough to explain the different carbon trends naturally.

While a chasm separates Ruddiman and his geographer clan from mainstream climatologists today, most researchers agree on which data could move the discussion forward. Geochemists await better ice core measurements of carbon to help nail down what came from the land and what came from the sea. Meanwhile, geographers hunger for more of what they call “ground-truth” evidence: bigger databases of pollen counts and early human settlements. They hope this information could fill in the gaps in the archeological record with more direct information about how much land humans cleared, and when.

A vindication of Ruddiman’s ideas would rewrite the start of the human climate change story, but not the end. “It’s an addition, not a replacement,” he says. Even if the 280 ppm seen at the dawn of the industrial revolution already had 20 ppm of pre-industrial carbon rise built in, that shouldn’t affect how we address climate change in a world where counts have breached 400 ppm and the burning of fossil fuels has spread far beyond China.