Watching the clouds go by

And modeling what they may do next 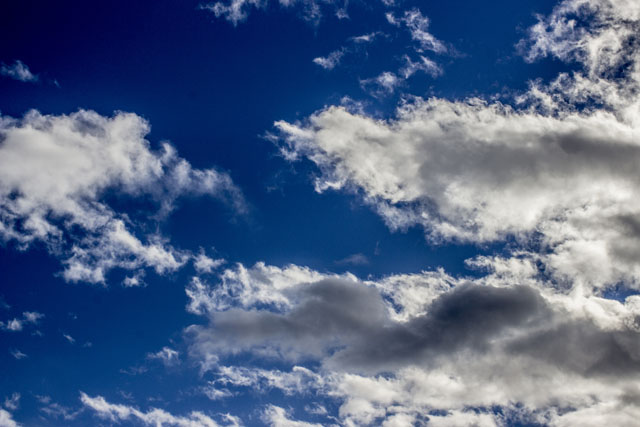 Clouds traipse in and out of our lives unconcerned. Sometimes we notice them, sometimes we don’t. But we sense deep down that while they may be inconstant companions, they’re never very far away.

That comforting feeling of dynamic stability hides a disquieting scientific fact: The clouds you watch today, tomorrow, ten years from now are not the same as the clouds your ancestors watched just a couple centuries ago. Clouds today are made differently and act differently — not so much you’d notice with eyes alone, but perhaps enough to change the planet.

You aren’t the only one who missed the change. None of us have seen it happen, because we haven’t been looking at clouds the right way. We’ve been too busy asking whether we’ll want an umbrella tomorrow, whether we’ll need to find new groundwater to slake next season’s crops. We’ve asked only what clouds mean for local weather, not global climate.

Scientists enumerate the ways in which we humans have changed the world around us: heating and eating and raising and razing. We hear about species lost, deserts gained, and ecosystems changed. But for me, realizing that we are affecting even the clouds is somehow a more dramatic recognition of human meddling, one that seems obvious once it’s pointed out but had never crossed my mind before.

Maybe that’s because clouds are more than just lumps of water in the sky. “Clouds are philosophical objects,” said James Fleming, an atmospheric historian at Colby College in Maine. “Thinking about clouds is both an art and a science.”

As we grapple with climate change, we’re learning just how much trouble we get into by taking clouds and their science for granted. There’s too much we can’t quite grasp: their history, their complexity, their sheer scale. And our inability to puzzle out clouds makes it harder to understand what climate change will look like, much less what we should do about it.

Humans have a long history of cloud-gazing. We love peering into the clouds searching for shapes. And our history with clouds is etched in the cultural records — just think of a painting by J.M.W. Turner or Claude Monet. We can even feed these observations into certain scientific queries, like how distant volcanic eruptions colored the skies above Europe. But the scientific study of clouds was only born in the nineteenth century and we only began truly counting clouds last century.

Inconveniently, by that point the Industrial Revolution was already in full swing. Industry brought with it sweeping changes to the atmosphere, including the release of not just greenhouse gases like carbon dioxide but also tiny particles called aerosols. Aerosols serve as the base for cloudstuff, just like a grain of sand does for an oyster’s pearl.

There were plenty of aerosols in the sky before the Industrial Revolution: Volcanoes have always hurled droplets of sulfur dioxide into the air, and winds snatch dust from the deserts. One recent experiment even showed that pine-scented molecules exhaled by plants could create aerosols without human interference. But for the past few centuries human pyromaniacs have been augmenting natural aerosols by burning oil, coal and forests.

Each aerosol particle becomes the heart of a droplet, so the more aerosols in a cloud, the more droplets it contains. But from here, it gets a little fuzzy. Scientists think that more droplets create more surface area and thus more reflective clouds. More reflective clouds could mean more heat from the sun diverted back into space away from Earth, which might moderate global warming. But scientists are still sorting out if that whole chain of events actually holds. “This is a big controversy,” says Steven Ghan, a climate modeler at the Pacific Northwest National Laboratory. With no baseline observations of clouds before artificial aerosols, it’s hard to be sure.

There’s a chance that researchers could find clouds pristine enough to understand how all clouds a few centuries ago may have acted. But they’ll be hard to find, says Ghan. “There are not very many places where the air is clean enough to represent preindustrial conditions.” An isolated corner of the southern hemisphere is our best bet for that.

Even modern clouds are tricky for scientists to manage thanks to their complexity. The most detail-focused scientists, like Ghan, squeeze a daunting list of cloud characteristics into their equations: droplet condensation, cloud fraction, optical depth, liquid water path, cloud lifetime effect.

“When we start to break this down,” says Graham Feingold, an atmospheric scientist at the National Oceanic and Atmospheric Administration, “one ends up having very, very many terms to quantify,” all interacting with each other. It’s nearly impossible to keep all but one of those pieces constant in order to isolate the effects of just one change.

Feingold argues we may be better off diverting some of our energy to studying how clouds behave at a much larger scale. “It’s a lot more manageable in my opinion.”

That approach may also be better suited to the imperfect eyes we turn to the clouds. “The tricky thing about the clouds is that small changes can have a big impact, but it’s hard to detect small changes with our current observing systems,” says Joel Norris, an atmospheric scientist at the University of California, San Diego.

And different types of clouds act differently. Some are made of liquid water, some of ice. Low-lying stratocumulus clouds, which snuggle close to Earth like a blanket, reflect the most sunlight away. That means a small change in how much sky they cover can make a more substantial difference in how warm the atmosphere gets than a bigger change in other types of clouds, says Norris.

The main tools scientists use to understand past and future clouds alike are climate models. But they tend to consider the planet in chunks about 100 kilometers (60 miles) across. “That’s much, much larger than many clouds,” says Joyce Penner, an atmospheric scientist at the University of Michigan.

And of course what happens inside a cloud is even smaller. About 100 billion aerosol particles can nestle side by side along just one 100-kilometer-long edge of a climate modeling square. Asking models to predict how individual aerosol particles affect clouds is a bit like asking airplane passengers to identify drivers texting at red lights thousands of feet beneath them. Modelers are working on zooming in, but it’s a steep challenge.

Feingold believes we need to look at both the microscopic details and the bird’s-eye view of how clouds are changing. If the two-pronged approach works, it could save climate modelers from a stack of contradictions. Ghan’s work right now is focused on trying to get models to line up well with observations.

That’s not an idle question: Models are so hazy about our future that their estimates of how much brighter clouds might cool the planet range from nonexistent to about enough to cancel out the impacts of carbon dioxide emissions. That’s as disorienting for scientists as it would be if you were never sure how much your paycheck would be worth, just that it would be between nonexistent and your salary.

If we better understood how clouds work and are changing, we might be able to exploit that knowledge. Some people, for example, want to use particles to make low clouds over the oceans artificially brighter. Those suggestions scare other scientists.

“There’s a lot of skepticism about to what extent is doing these experiments leading to a slippery slope,” says Rob Wood, an atmospheric scientist at the University of Washington. He points out that if people had solid evidence that a quick fix could reduce the impact of climate change, momentum to make difficult carbon cuts would sputter.

But Wood thinks small experiments may be worth the risk to better understand our options. “It would be better to do things that we have a good deal of knowledge about already than rush into something ill-thought-out.”

Even if this tactic, one of a suite of manipulations called geoengineering, does work theoretically, it may not be very practical. That’s because while a molecule of carbon dioxide can linger for centuries in the atmosphere, an aerosol particle has the lifespan of a very small butterfly and flits through in about a week. We would need to continuously pump a flood of aerosols into the sky if we did nothing about carbon. “If you commit to geoengineering,” says NOAA’s Feingold, “you have to commit to long-term geoengineering.”

We have a long history of artificial clouds with a dark tinge, says Fleming, the atmospheric historian: Sherlock Holmes’s London smog, clouds of insecticide during the 1950s, black rain after the nuclear attack on Hiroshima. As we realized the consequences of our choices, we changed our ways and each type of unnatural weather wore off.

Whether we try the same approach today is yet to be seen. Clouds may be transient, but climate change isn’t, and it’s gaining speed even as scientists try to hone their models. We’re running short on time to decide what to do.