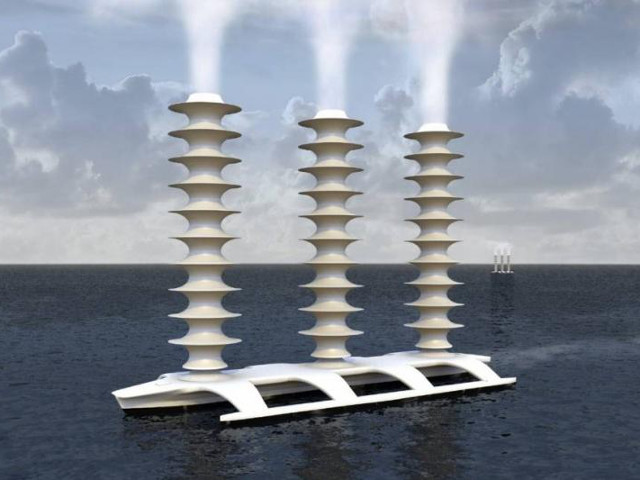 One of geoengineering’s solutions to climate change is spraying seawater droplets into marine clouds to make them reflect more sunlight back into space. Image credit: NASA

Geoengineering — that wild and grandiose idea that suggests we could offset and even reverse the alarming effects of global warming — has been viewed as an insane notion for decades. Surely we’d have to be truly desperate before we’d even consider deliberately fiddling with the planet on such a massive scale.

But now, some experts think we’ve reached the point where we have no choice but to look into geoengineering.

Earlier this year, the National Research Council released two reports that called for more research on the idea. The first report examined ways we could remove some of the carbon dioxide from the atmosphere. At first glance, this might be plausible. But the second report looked at far more controversial methods, such as releasing reflective particles into the atmosphere to block sunlight and therefore cool the Earth.

The second report warned that at this time, these methods were risky and poorly understood. But I’d like to take this a step further: Both reports contain ideas that will never be practical and are actually more dangerous than the problem at hand. We will never understand the risks well enough to justify any of the outlandish schemes that these reports describe.

Most scientists agree that geoengineering should never be a substitute for solving the problem upfront. Sadly, we’ve been so slow to burn fewer fossil fuels and cut our greenhouse gas emissions that many scientists now think geoengineering might help us clean up the mess we’ve already made.

As human beings, we have the tendency to think that technology will save us. But if there’s one lesson we should have learned by now, it’s that we can’t keep playing God with the planet. We simply don’t understand the climate system well enough to predict how any geoengineering method would play out in the future.

Although the first report, on carbon dioxide removal, doesn’t seem completely ludicrous at first glance, it takes just one example to reveal its folly. In 2012, a rogue American millionaire dumped 220,000 pounds of iron sulfate into the Pacific Ocean to create a massive, carbon-sucking plankton bloom, nearly 4,000 square miles big. This illegal maneuver may have removed some carbon dioxide from the atmosphere, but scientists worry these blooms can kill marine life and cause toxic tides.

The second report examined a much easier and cheaper approach than removing atmospheric carbon: Spraying reflective particles, called aerosols, into the atmosphere, to intercept incoming solar radiation. This would essentially be the man-made equivalent to volcanic eruptions. When Mount Pinatubo erupted in 1991, spraying white ash more than 12 miles high, it temporarily lowered the Earth’s temperature by nearly 0.3 degrees for three years. But this method, too, has scary side effects.

Every cloud droplet forms around an aerosol particle. But man-made aerosols differ in size, composition and number from natural aerosols. So they could form radically different clouds.

Scientists aren’t sure how well these man-made clouds would reflect sunlight back into space (therefore reducing the Earth’s temperature). They might be tenuous enough to let more light through. They would also likely affect the raindrops forming within the clouds, creating huge precipitation changes that could bring droughts to some areas and floods to others.

But what’s really scary about geoengineering is that once we start, we can’t really stop. As soon as we quit sucking up carbon dioxide or spraying aerosols into the atmosphere, the Earth will heat up rapidly. And a rapid heat increase is much more dangerous than one spanning a century or more. The world’s ecosystem, not to mention the humans within it, will have little time to react.

So the million-dollar question is: Is geoengineering, despite its obvious drawbacks, still worth investigating — just in case? No. The longer we look into it, no matter how innocently, the more likely we are to do it. We’ll gain some understanding of the climate system and think we know it all. But we will never know every foreseeable side effect.

It’s time to put our resources into harvesting green energy today. Researching geoengineering will only take attention away from the problem at hand. It risks that we’ll continue to burn fossil fuels under the assumption that we’ll fix the issue later. And that’s a chance we simply cannot take.

One thing is certain: The fact that some serious scientists are now calling for more research on geoengineering means we’ve reached a terrifying place. Isn’t it time to finally get serious about cutting carbon emissions instead of holding out for techno-fixes that could backfire disastrously?

Shannon – I’d be interested to see what research you did for this article, as you repeat almost verbatim a set of misleading assertions on the issue that have been broadcast widely since 2013, even in minor county papers that don’t tend to cover AGW.

First, it is not “some experts” but the opinion of both the US National Research Council, the UK’s academy of science ‘the Royal society’, and the global Intergovernmental Panel on Climate Change, that reliably benign techniques for both the Carbon Recovery and Albedo Restoration modes of Geo-engineering [Geo-E] should be researched and trialled. To any serious scientist, the starting point of such research is the establishment of a global scientific authority to provide careful authorization and stringent supervision.

The goal of geo-E research is nothing to do with reducing the need to cut GHG emissions; it is about controlling the warming to which we’re now committed – from past emissions timelagged warming, plus that from inevitable phase-out emissions, plus that from the resulting closure of the cooling ‘Fossil Sulphate Parasol’, plus that from the eight Major Interactive Feedbacks that are now reported to be accelerating at 0.85C of AGW, and that will not be halted by anything less than a cooling below this level.

The examples you use to try to discredit Geo-E are patently untenable in practice. The disruption of crucial rainfall patterns by the global dispersion of stratospheric sulphates would get this option halted within a couple of years. The seeding of massive plankton blooms would be slower in showing far worse effects, specifically in causing major anoxic marine zones releasing toxic hydrogen sulphide.

There are highly preferable subjects for research, such as the carefully targetted ‘Cloud Brightening’ option – that rains out within nine days – and the ‘Carbon Recovery for Food Security’ option, which at best uses native coppice afforestation for biochar and coproduct methanol, with the biochar plowed in by farmers as a soil-moisture regulator and fertility enhancer. The latter is evidenced as benign from its use across a large area in Amazonia about 2,000 years ago. (Search Terra Preta, and ‘cool planet’).

The canard about ‘having to run albedo restoration forever’ just doesn’t fly. It is surely obvious that besides ending global anthro-GHG outputs ASAFP, that we need to cleanse the atmosphere of excess CO2 both to avoid ruinous ocean acidification and to avoid global temperature staying at whatever peak it’s pushed to for hundreds of years ? There is thus no case for running Albedo Restoration by itself. However, it is essential alongside Emissions Control and Carbon Recovery as the means to restore natural temperature during this century and thereby avoid the destabilization both of global agriculture and of the crucial afforestation, while also halting the potentially catastrophic Major Interactive Feedbacks. It is thus plain wrong to present Geo-E as a techno-fix alternative to emissions control – its actual role is as the necessary and sufficient compliment to emissions control by which AGW can, eventually, be resolved.

Finally, I would point out that your call for focussing on renewable energies is actually a part of the diversion from the crucial issue for resolving AGW – which is the agreement of rapid binding global emissions control. The US govt actively opposes and obstructs that outcome for its own reasons, knowing full well that without it any fossil fuels locally displaced by renewables will continue to be bought, shipped and burnt elsewhere. The key effort is thus in getting the US govt policy changed, at which point it logically switches massive subsidies from fossils to renewables.

Hoping you will publish this as a contribution to the debate,
regards,
Lewis Cleverdon

It might be necessary to use geoenegineering as temporary method of keeping the earth habitable AND also lowering greenhouse gas emissions until we can get off our addiction to artificial climate modification.

I feel its necessary to look at gongneineerieg but the only corrective action that would work at this time would be to reduce the amount of CO2 in the atmosphere. A warmer atmosphere increases the size and strength of the Hadley cell responsible for droughts in this part of the world. Desertification will continue to march on.