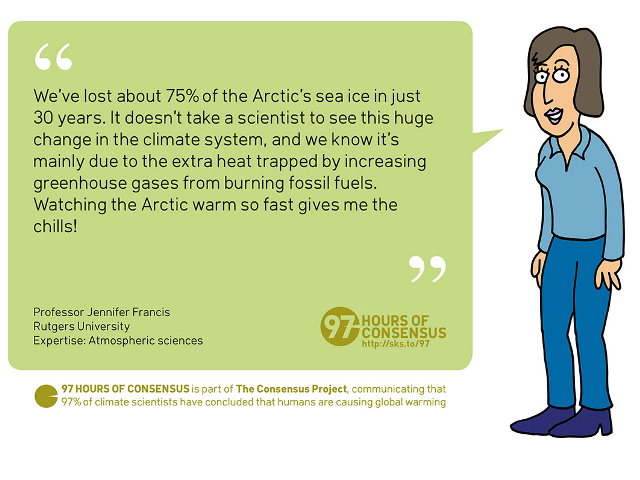 One of the many cartoon caricatures of a climate scientist debunking the myth that climate change is still a debate. [Image credit: 97 Hours of Consensus]

Despite overwhelming scientific evidence, climate change denial stubbornly persists among the public. So a few communicators are looking for new ways to inform society. And, they’re using approaches that have worked in kindergarten classrooms for decades: repeating their messages, simplifying the scientific results and even using cartoons.

They argue that too little information is at the root of all misunderstandings. It’s a seductive model — one with a straightforward solution — but it contradicts a growing view among science communication scholars that mere education is not enough.

“We have a societal tendency to believe that information and data will answer our questions, as opposed to recognizing the valuated aspect of many issues,” said Gregory Mandel, a law professor at Temple University in Philadelphia who studies the psychology of public opinion on science and technology issues.

The problem is, communicators have presented the public with much more information about climate change over the last 20 years, but have made only slight progress toward building a societal consensus on what that science shows, argues Mandel. “My perception is that it’s budged the needle but not much.”

For instance, a recent study by the PEW Research Center (an organization that provides information on demographic trends across the U.S. and the world) found that only four in 10 Americans see climate change as a global threat.

Still, many climate experts keep trying. In September, for example, climate scientist John Cook of the University of Queensland in Australia launched what he called a 97-hour social media event. Each hour, the site displayed a relevant quote from a climate scientist, along with a playful caricature of that scientist. Cook considers the event successful, with tweets seen up to 1.1 million times.

But repetition alone won’t close the gap, argues Michael Ranney, who studies the psychology of climate change denial at the University of California at Berkeley. It’s “not going to be enough if people continue to hear the opposite,” he said. Instead of being engaged in a war of he said she said, the public needs a tiebreaker, something to silence the opposite side of the debate, he argues.

So in 2013, Ranney created five cartoon videos — with the shortest clocking in at 52 seconds — that explain the basic physical mechanism behind climate change using colloquial language. It’s a vital tool in convincing people that humans really are changing the climate, argues Ranney, calling it the tiebreaker necessary to silence science deniers.

Although Cook and Ranney might disagree slightly with one another, they both stand on the same side of a much larger debate, arguing that the public simply needs greater information and greater data before they’ll reach a consensus about climate change.

There’s emerging evidence, however, that this knowledge deficit model of science communication is flawed. In 2013, Yale Law Professor Dan Kahan, Temple’s Mandel and others addressed this exact question in a study published in the journal Nature Climate Change. “Our study provided compelling evidence that increased education about how global warming works will not reduce the public polarization on climate change,” said co-author Lisa Larrimore Ouellette, from Stanford Law School.

Alarmingly, their work shows that the more information you give people, the deeper their disagreements become.

People’s likeliness to accept climate change has little to do with their scientific literacy and more to do with their deep-rooted cultural dispositions, Kahan and his co-authors assert. In fact, individuals with a higher science comprehension are even better at fitting the evidence to their societal values.

Perhaps the best solution is to combine both approaches. If climate change communicators provide the public with more information, so long as it is well aligned with the public’s cultural beliefs, then the public might reach a consensus where there is now only polarization.

I greatly appreciate the attention to the research that our Reasoning Group (e.g., among others, Dav Clark regarding the experiments and Lee Nevo Lamprey & Kimberly Le regarding the web-site, videos, etc.) has been engaged in, and I thank Ms. Hall for her informative piece. However, I would offer some caveats and extra information: (1) Although it is not quoted text, I don’t believe that I ever said that I wanted to silence the other side of the debate (an idea I don’t resonate with, whichever ‘other side’ it might be); I only want whatever is true to emerge and to be known by all (and I would be ecstatically grateful if someone could convince me that anthropogenic global warming were not occurring as I could worry less about humanity’s future, abandon this line of research and return to other lines of research!). (2) I agree with elements of what I think John Cook and Dan Kahan (separately) believe; for instance, I think repetition is fine but not sufficient (as I suspect John would also say), and I believe (like Dan) that the knowledge deficit model is not a complete one for climate change communication–although our group’s studies have repeatedly shown that the more people know or learn about the mechanism of global warming, the more they accept that it is occurring/anthropogenic. (3) Dav Clark and I also found that these 7 statistics, after estimating them and getting feedback on them also (i.e., like the mechansitic information) increase acceptance of global warming: http://www.howglobalwarmingworks.org/7numbers.html
— Michael Ranney

Shannon, thanks for your article and mentioning our 97 Hours of Consensus campaign.

However, my approach to communication is a lot broader than mere repetition. I don’t disagree with Mike Ranney at all. On the contrary, I’ve followed his research closely and with great interest, and think his research into the power of simple numbers as communication devices is quite instructive for communicators. In fact, that research complements our approach in reinforcing the 97% consensus (and in fact, one of the numbers used in his studies is the 97% consensus).

I certainly do not argue that “the public simply needs greater information”. On the contrary, my research focuses on the biasing influence of ideology and I’m all too aware of how cultural dispositions affect how people process climate information. Consequently, I advocate exactly the approach in your conclusion – combine both approaches – ironically in a guest post on Dan Kahan’s blog:
http://www.culturalcognition.net/blog/2014/6/20/response-an-externally-valid-approach-to-consensus-messaging-1.html

So cultural values and information deficit both contribute to the consensus gap. Kahan himself suggests that science communicators should consider two channels: information content and cultural meaning. Arguing that one must choose between the information deficit model or cultural cognition is a false dichotomy. Both are factors. Ignoring one or the other neglects the full picture.