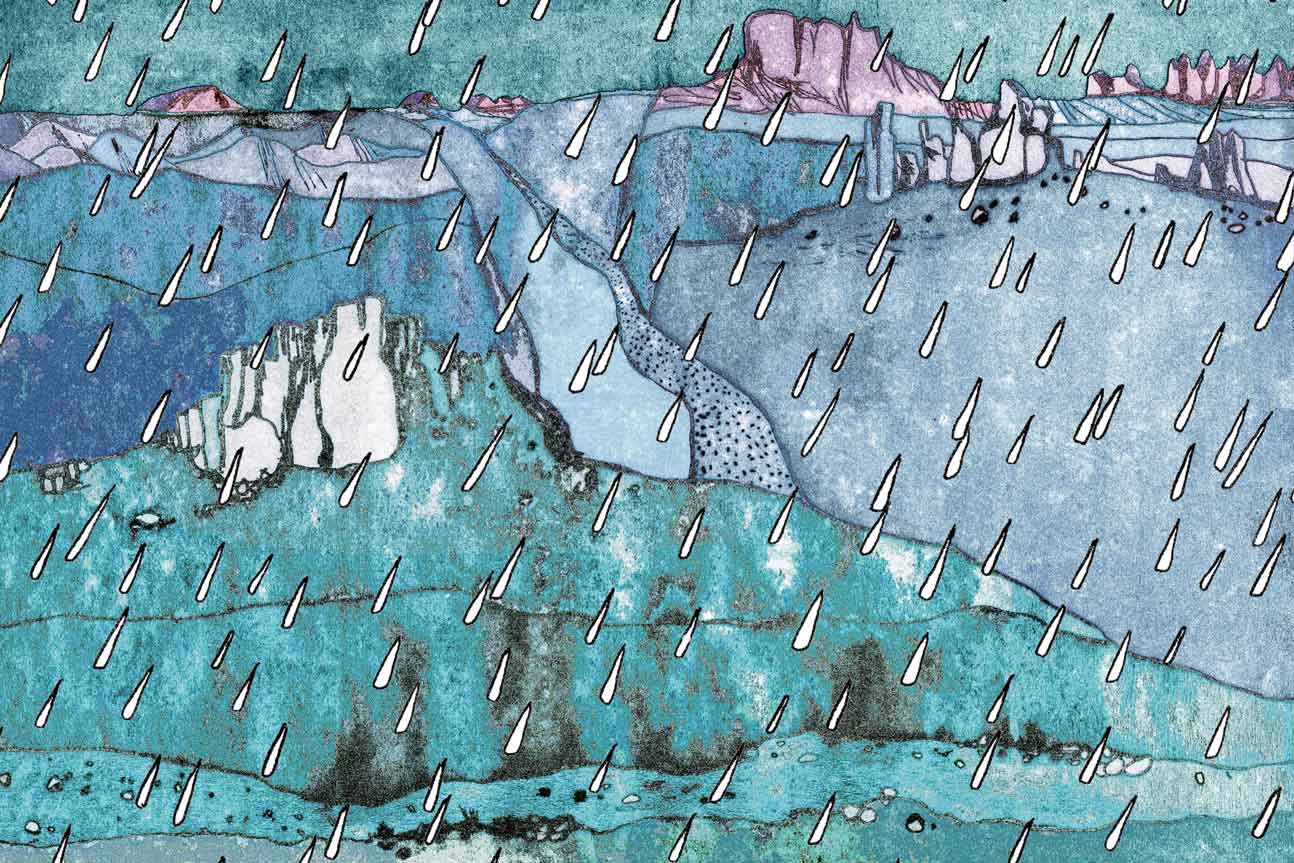 A spread from Thunder & Lightning shows the Atacama Desert during one of its rare downpours. [Image credit: Random House.]

You’ve probably been there. You’re with someone you don’t know well enough to talk about anything substantial with. There’s an awkward silence. Still, there’s always one topic in your back pocket to save a flagging conversation: the weather.

Sunny or rainy, tropical or arctic, the weather is the backdrop of our lives. “It affects everybody,” said Keith Seitter, executive director of the American Meteorological Society. “Every morning when you get up, it’s part of your thought process.” But rarely do we stop and think about how weather works, or how it has impacted our history.

It’s the tension between weather’s ubiquity and how much we write off its impact on anything more important than weekend plans that fascinated award-winning author and artist Lauren Redniss, who launched her new book, Thunder & Lightning: Weather Past, Present, Future, on Oct. 29 at the American Museum of Natural History. She finds each new project by considering what she has missed during the last one. After finishing her previous book on the discovery of radioactivity, she felt burned out from complicated science. She joked to a friend that her next book would be about rainbows and clouds — and it is. “It turned out to be an epiphany,” she said.

Redniss is interested less in the details of atmospheric science than in the human experience of it. She offers an eclectic collection of tidbits and anecdotes in her book, from engineers bringing a cool breeze to ever-growing crowds of pilgrims crammed in the courtyard of Mecca’s Great Mosque, to crime spikes during London’s “pea soup” fogs in the late 1800s and early 1900s, to Craigslist ads for companionship as Hurricane Sandy neared New York. Her book includes details from her travels around the world, as well as two years spent in residence at the American Museum of Natural History.

But what’s most striking about Redniss’s work isn’t the stories she tells, but the format she uses to do so. “I write picture books for adults,” Redniss explained. “Some people think that’s a little strange; to me it makes perfect sense.” Redniss not only did all the illustration herself; she also created a font especially for the book and designed each page.

She purposefully taps into the centuries-long tradition of communicating science through prints, although her style is much softer and more emotive than the likes of Renaissance anatomist Andreas Vesalius and American bird cataloguer John James Audubon. She’s inspired as much by the failures of scientific illustration as by its exemplars. For example, one 1719 Dutch book of marine life she found in a museum library was riddled with anatomical mistakes — including at least one mermaid. “Where the images go wrong is where we begin to understand the limits of scientific knowledge of the time,” she said.

The book opens with the story of a Vermont graveyard robbed of bodies by the floodwaters of Hurricane Irene. “This is what weather can do — it can upend our most basic assumptions about life, it can unbury the dead,” Redniss said. But she prefers more sublime stories like that of the Atacama Desert, which bursts into flower after a rare storm. “Weather is sensual,” she said. “We feel the breeze on our cheeks, we smell the earth after it rains, we see the world blanketed in snow.”

Scientists like Seitter take a more workmanlike approach to the weather, noting the burden forecasters feel of the lives and property in their protections. But he too sees aesthetic at play in his work. “Those of us who go into science believe that to understand something makes it more beautiful,” he said. “Complexity has a beauty to it.”