Freezing corals to safeguard their future 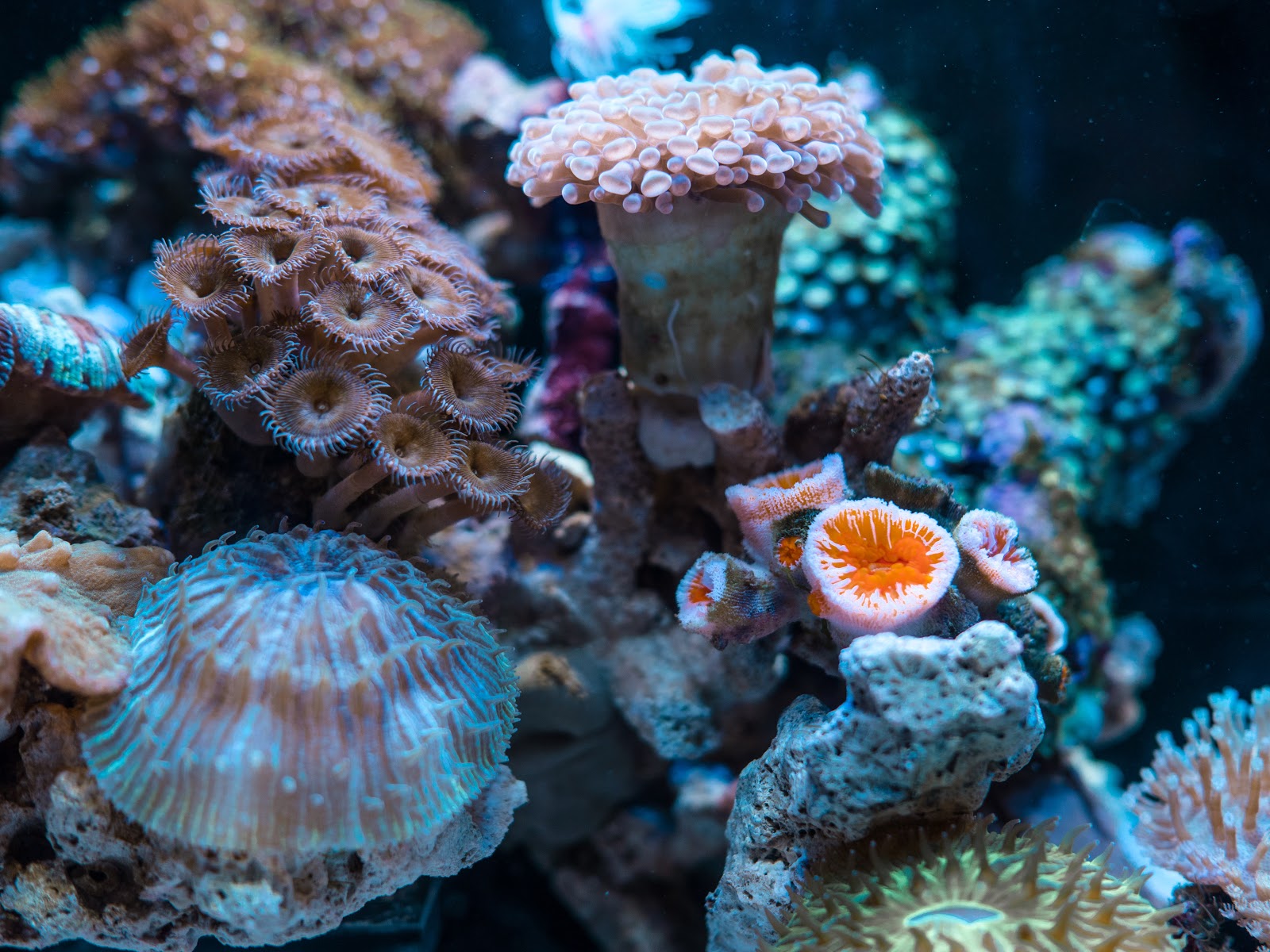 Corals are home to 25% of all species of marine life, making them one of the most important biodiversity hotspots on Earth. [Credit: Jimmy Chang | Unsplash]

Some corals are more resilient to acidifying oceans than we thought

Like many millennials, they turn to astrology for romantic guidance: Once a year, several days after the full moon, billions of sperm and egg cells are released by the corals that form the Great Barrier Reef in Australia, the world’s largest coral reef. Each of the 400 coral species gets just 40 minutes or so for a “release party” to prevent hybrids from forming.

Out of millions of released egg and sperm cells, only a few escape being eaten or destroyed and fall down to the bottom of the ocean to begin a new reef. In just two days, it’s over; the corals return to their asexual existence. In this brief window, marine biologist Mary Hagedorn and her team spend sleepless days and nights scooping up as many larvae as possible.

They are racing the clock in more ways than one. Coral reefs all over the world are dying due to climate change, ocean acidification and rising temperatures; 70 to 90% of corals may disappear by 2050. Coral die-offs are a major threat to entire ecosystems because so many other kinds of marine life — a staggering one in four marine species — depend on reefs for food and shelter.

“We don’t know when the new extinction could occur,” says Nicola Rivers, a graduate researcher in reproductive biology at Monash University in Australia.

In the face of unpredictable environmental conditions, Hagedorn and other researchers are looking ahead and working to create libraries of coral genetic material that will serve both as a research tool and as a backup in case some coral species don’t survive this century.

“Cryopreservation is important because it is the only way we can save reef diversity,” Hagedorn wrote in an email.

Over the past 20 years, Hagedorn, a research scientist and director of the Smithsonian Institute’s Marine Global Earth Observatory in Hawaii, has focused on perfecting cryopreservation. The technique can theoretically allow scientists to preserve samples for hundreds of years. When they’re ready to, they can then unfreeze them and see the sperm move again, unscathed. The scientists can use these defrosted sperm and eggs to fertilize an animal or, if the species reproduces on its own, simply grow more animals.

Cryopreservation essentially allows us to press pause on loss of coral species and wait until better methods for reef restoration are developed, Rivers says. Current efforts to plant new corals and grow new reefs are expensive and mostly unproven, though many researchers are working on the problem — and in need of larvae from coral libraries like Hagedorn’s.

Recently, Hagedorn’s team has gotten much better at creating these coral libraries. Now, not only can they freeze coral larvae, but they can do so exceptionally quickly, according to a paper published last October in Nature Scientific Reports. “We used to be able to freeze about 300 larvae per day. Now we are getting to the point where we can almost make it like a factory,” Hagedorn says. “We can freeze thousands of larvae per minute.”

That speed will allow researchers to preserve more genetic material. In turn, other scientists could test new restoration techniques. There would also be more security for future restoration efforts. When it comes to cryopreservation, “the more the better,” says Pierre Comizzoli, program director at the Pan-Smithsonian Cryo-Initiative in Washington, D.C.

“When we have a few individuals that are left, their genetic material has to be preserved. But also in species that are still abundant, like deer,  there is value in using cryopreservation,” Comizzoli says. “There is no magic number [of how many samples should be preserved.”

It took two decades for Hagedorn to develop the process because thawing frozen larvae is just as difficult as freezing it in the first place. The same ice crystals that preserve larvae can pierce them during thawing.

A similar principle applies to ice cream, she says. “You buy Häagen-Dazs ice cream, and it tastes so great, because there is lots of fat, but also because the ice crystals are very tiny,” Hagedorn explains. “Then you become lazy, and you put it in a freezer without a lid. There are now huge crystals, and the ice cream tastes terrible.”

One solution to prevent ice crystals from causing damage is to heat up the ice extremely quickly. In a new method, scientists use directed lasers to heat up the larvae at the speed of 4,500,000 degrees Celsius per minute. The heat is so intense that it goes from -200 to 0 degrees Celsius in a millisecond, Hagedorn says. They have successfully thawed nearly 300 larvae, 43% of which survived for at least the next two days.

Using cryopreservation, you could store genetic samples from the all the species that make up the Great Barrier Reef in a room that’s less than 100 square feet, Hagedorn says.

The idea of freezing sperm and eggs for the future is not exclusive to coral reefs; cryopreservation has been applied to species all over the world, especially to those at the risk of going extinct, for more than 60 years, .

“It’s very important for us to have the genetic materials from those individuals available long after they are dead because we can still use their material to potentially recreate them,” Comizzoli says. He refers to the potential of using sperm and eggs of extinct mammals and inseminating them into a closely related species to carry the pregnancy. This technique would not be necessary in corals, though, because preserved larvae can already survive on their own, if planted and nurtured correctly.

However, there is no universal method for freezing samples, so a unique method has to be developed for each species, Comizzoli says. For instance, cryopreservation is well developed in bulls for artificial insemination. A survey from 1995 showed that more than 190 million doses of cattle semen were processed as frozen products.

But the same methods of using frozen sperm for reproduction in cattle are not easily transferred to critically endangered white rhinos. The sperm of the last male white rhino, who died in 2014, is now preserved in a small test tube in the San Diego Zoo, giving researchers hope of future restoration.

Rivers is working at the Australian Frozen Zoo where, instead of animals, visitors can see large tanks containing about 5,000 little tubes, each containing a genetic sample from an animal species.

“It would certainly be nice to have samples from all animals that are endangered,” she says. “Because I guess even if we are looking at just taking samples now, genetic [restoration] techniques constantly develop.”

Naturally there are issues with cryopreservation as well: It’s neither cheap nor easily installable in poorer countries that have the most biodiversity and therefore need cryopreservation the most, Comizzoli says. That’s why he is working on other methods of genetic preservation, such as dehydration.

“Yes, cryopreservation is very important, it’s something that has to be done systematically, but it’s only one part of the puzzle of preservation of biodiversity,” he says.

Hagedorn has put all of her efforts into figuring out just this one piece of the puzzle. Back in her Hawaii lab, she is anxious to start testing the new techniques in the wild. The important thing, she says, is to make sure that frozen larvae not only can be successfully thawed, but also planted in the wild to give rise to new corals.

“Corals are these amazing creatures,” she says. “They are so critical to our life on Earth.”

Hagedorn even dreams of going beyond this world to preserve corals. Because genetic material has to be preserved at such low temperatures, the deep freeze of outer space could be a better place to store our planet’s biodiversity, she says.

“We are thinking about building a cryobank in space,” says Hagedorn, who is 64. “That will be my last project before I retire.”