There’s nothing virtuous about your ‘sustainably’ caught fish

The belief that fish is a healthier, greener option is further driving overfishing 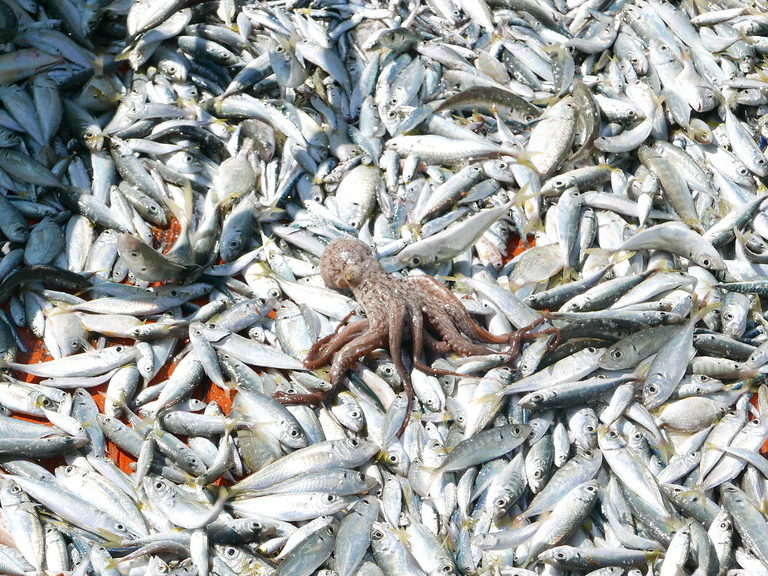 Bycatch, fish and other marine animals incidentally caught while fishing, is common in the fishing industry and difficult to prevent, according to experts. [Credit: SPA/RAC CC 2.0]

I have a confession. For most of my life, I have repeated the same lie: “I am a vegetarian.”

In my own defense, I didn’t know I was lying. You see, at six years old, I renounced eating all animals — except fish. I gave up my beloved pepperoni, burgers, and chicken. But for some reason, the dead piece of salmon on my dinner plate didn’t phase me. To me, it didn’t count as an animal.

My experience isn’t unusual. There’s even a name for this irrationally inconsistent dietary preference: “pescetarianism.” But plenty of fish-eaters refer to themselves as vegetarian, as I always did. The contradiction is cultural as much as it is individual. How many times have you checked “fish” rather than “meat” on a wedding invitation? We view the two entities as entirely separate, and fish is often seen as the more virtuous option: for your health, for the poor chicken you would otherwise eat, and for the environment. The ubiquity of wild-caught, “sustainably sourced” options only add to the perception that fish is the ethical choice.

That perception is not only wrong — it’s actively harmful to our planet.

Since 1970, we’ve cut the number of fish in our oceans in half. Yes, part of the reason for the decline in fish has to do with pollution, disease and climate change. But overfishing, which is inherently unsustainable, plays a major role. It’s simple math — we’re pulling 110 million pounds of fish from our oceans per year, and our oceans can’t generate nearly enough replacement fish to replenish the waters.

Today, thirty percent of the fish species we eat are overfished. If we keep fishing from these stocks the way we are now, they will disappear. Another sixty percent of fish stocks are maxed out — technically they’re able to replenish themselves, but barely. And research suggests that we’re fishing more than we think. Much of the fish we eat is illegally caught (some estimates put that number close to fifty percent), and therefore goes unreported, giving us a lowball estimate of our true impact on the ocean.

The fact that our oceans are overfished isn’t news. But instead of decreasing our consumption of fish, we’re increasing it. Even as meat consumption in the U.S. has decreased and veganism has mushroomed in popularity, fish has only become more trendy and popular.

It was our concern for good health that drove up our consumption of fish, says Daniel Pauly, the who leads the Sea Around Us initiative at the University of British Columbia. “The U.S. is not really a country that likes fish,” he says. But research on the health benefits of fish — from Omega-3 fatty acids to vitamin-D — drove Americans to buy wild-caught salmon in bulk from Costco and fish oil from Whole Foods.

And it was good intentions that drove us towards more environmentally friendly options. When we heard that dolphins and turtles were getting caught in fishing nets, we sought out labels that said “sustainably caught.” The desire to do good has put untenable pressure on wholesalers to provide those options. According to Pauly, “there is no way in hell” that truly sustainable fisheries can meet the demand that has grown for their fish. As a result, fraudulent labelling has become rampant.

In an ideal world, a sustainable fishing operation would keep careful tabs on the fisheries they source from, says Jennifer Jacquet, an environmental social scientist at New York University. That means making sure that any fish taken are fully replenished by limiting catches to allow for healthy reproduction rates. But we’re a long way from that day. Right now, . once sustainably caught fish reach wholesalers, they get mixed in with other fish from more dubious sources. Then, all fish get slapped with the same blue label, says Pauly. So you don’t really know what you’re getting.

When you see that little blue label, it’s usually the Marine Stewardship Council that’s certified your fish as “sustainable.” But according to Jacquet, this influential group is guilty of something called “blue washing.”

“They have been overly generous in their interpretation of sustainability,” Jacquet says, “It gives consumers a false sense of satisfaction.”

So we go out and buy more fish.

The shiny blue label will never erase the fact that we’re fishing too much, plain and simple. Instead, we should be focusing on eating less fish, period — sustainably caught included. And with plant-based alternatives abounding, from uncanny meat imitations to soy-based products, that there has arguably never been a better time to do so.

Jacquet’s outlook is positive. “It’s going to be a century of self-restraint,” says Jacquet.

I recently found myself telling a relative that I am now “rich enough to eat frozen fish.” By which I mean those boxes of frozen “sustainably caught” fish marketed by Wild Alaska and Vital Choice.
You paint the big picture, but I would have liked to see you nail specific companies and point out those who are “blue washing.”