Researchers are preparing to extract gas from methane hydrates, despite uncertain potential and environmental risks 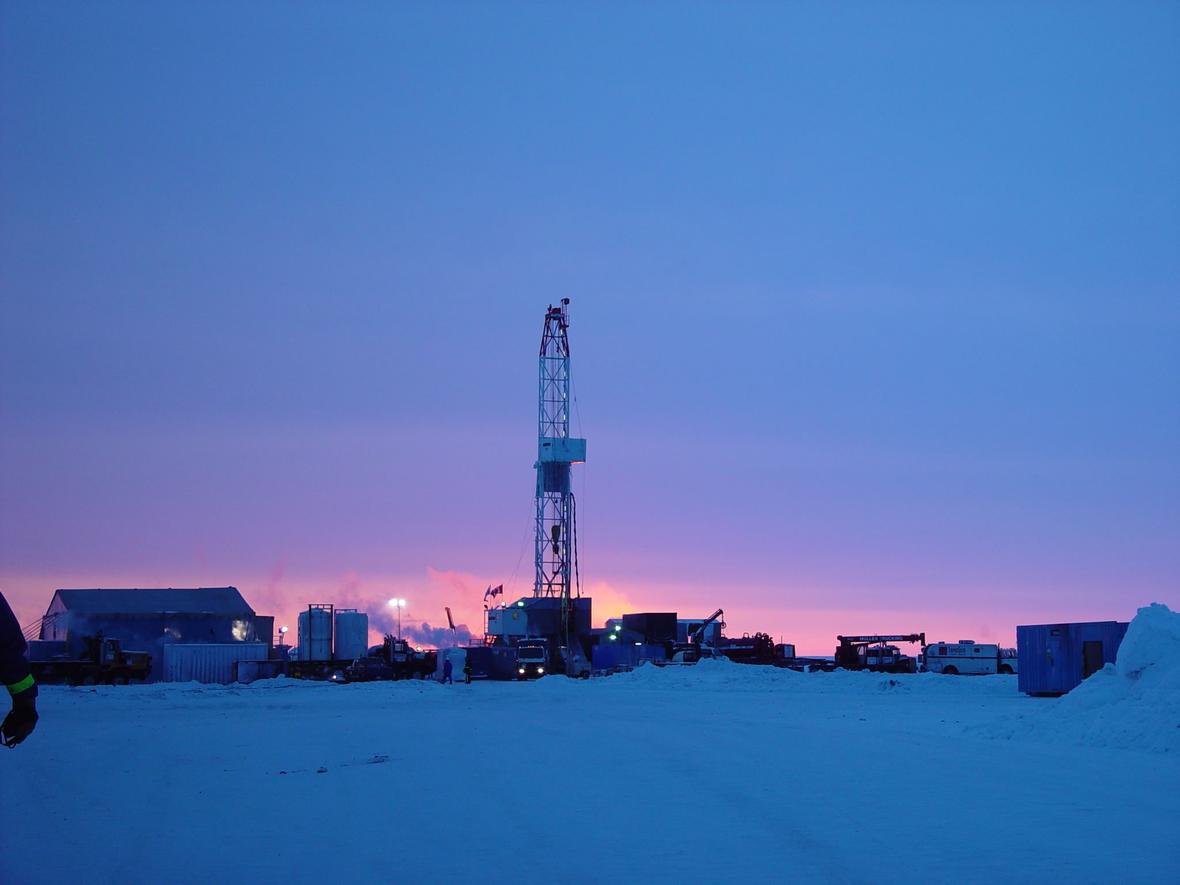 An early hydrate drilling test site in Canada's Mackenzie Delta circa 2016. Next year's test in Prudhoe Bay, Alaska will be the longest one yet [Credit: Suzanne Weedman, USGS | Public Domain Mark 1.0]

A bridge to nowhere?

A large volume of untapped natural gas is stored in ice crystals known as methane hydrates, which are found under permafrost and beneath the seafloor.

In the past few decades, new drilling techniques have allowed gas companies to access deposits beneath layers of shale rock via hydraulic fracturing, or “fracking.” But so far, there’s no reliable way to produce natural gas from hydrates. And not everyone thinks it’s a good idea.

Despite concerns from environmental groups, government researchers from the U.S. and Japan are moving ahead with plans to begin a long-term test of a promising methane extraction technique in Prudhoe Bay, Alaska. They plan to begin drilling in 2021 at a site within a long-used oil field containing two viable hydrate reservoirs. The test will last approximately one year.

“Hydrates are the largest reservoir of natural gas that we have available to us. It’s just a question of ‘is it economical to access them?’” says Joseph Stoffa, a technology manager at the National Energy Technology Laboratory, which is collaborating with Japan’s Oil, Gas, and Metals National Corporation on the study.

But some worry that continuing to develop new sources of natural gas could prolong the world’s dependence on fossil fuels. “We need to be transitioning to renewable energy instead of just finding better ways of fracking,” says Dominique Thomas, an organizer for the environmental advocacy group 350.org.

Activists have also raised concerns that drilling into hydrate reservoirs could release methane, a greenhouse gas which is 72 times more potent than carbon dioxide for the first 20 years it spends in the atmosphere. Natural gas production has long carried the risk of methane leaks from pipes and wells, sometimes called “fugitive emissions.”

Stoffa says that any efforts to extract methane from hydrates would aim to minimize escaping methane. The technique they plan to use is standard in the natural gas industry and carries the same risks to the drill site as conventional gas drilling, according to Tim Collett, a senior scientist at the U.S. Geological Survey.

Some independent experts also question the economic wisdom of developing hydrates. Clark Williams-Derry, an energy finance analyst at the Institute for Energy Economics and Financial Analysis in Ohio, is skeptical that hydrates will become viable in time to compete with fast-growing sources of renewable energy like solar and wind. Besides, he says, the natural gas industry is suffering from oversupply these days. “They have a lot of problems, but a scarcity of methane is just not one of them right now.”

While the cost of solar and wind power is decreasing, the technology still needs to overcome hurdles like long-term energy storage, says Stoffa. He also defends the scientific merits of the hydrate program, which include “understanding the role that hydrates play in the global methane cycle irrespective of their eventual development as a natural resource.”

Hydrates are molecules of gas trapped in a crystalline “cage” of water molecules. They form where temperature is low and pressure is high enough to squeeze the substance into a solid. “You won’t find any hydrate in Michigan,” says Ray Boswell, a geoscientist at the National Energy Technology Laboratory. In 2018, he and others drilled a well to test whether the Prudhoe Bay site was a good fit for the long-term extraction test. Their results are presented in a paper submitted to the 10th International Conference on Gas Hydrates.

Previous experiments have identified depressurization, in which groundwater is pumped from the methane reservoir, as the most promising way to extract methane from hydrates. As the pump relieves the pressure, the ice turns to water, the gas escapes, and both flow toward the wellhead. An offshore production test in Japan produced about 7.9 million cubic feet of natural gas over 25 days.

Boswell says next year’s extended test will allow the U.S.-Japan team to see how the reservoir responds over time, whether the flow of methane continues to increase after the initial burst. “That all depends on how heat moves through the reservoir and how the reservoir mechanically changes as you withdraw fluid from it,” he says.

The 2018 test well provided data on underground temperatures and vibrations and allowed researchers to take samples from the surrounding rock. In 2021, the researchers plan to drill three additional wells: another monitoring well and two pressure-reducing production wells. Japan is seeking contractors to drill the wells and plug them again when the project is completed.

Japan, which relies heavily on imported energy, hopes to develop hydrates as one option for meeting its energy needs domestically, at least in the short term. The Nankai Trough, an ocean gorge located near the country’s Pacific coast, is estimated to contain 40 trillion cubic feet of methane hydrates. The nation has been working to replace many of its nuclear power sources following the catastrophic accident at the Fukushima Daiichi power plant in 2011.

“Especially after Fukushima, for 10 or 20 years we may need a lot of natural gas,” says Koji Yamamoto, a project member and scientist at Japan’s Oil, Gas and Metals National Corporation, which has collaborated with the U.S. on Arctic hydrate research since 2014. The corporation estimates the private sector will be able to begin using the technology by 2027.

The country has pledged to generate 22-24% of its energy from renewables by 2030, and this year, they reached 23.1%, according to the International Energy Agency. Still, the enormous volume of gas contained in undersea hydrates, so close to shore, remains an attractive prospect for the country.

“Hydrates are a better source,” says Yamamoto, “but not a final solution to the energy problem.”