I’d already been sitting on the train for 18 hours when we pulled out of Denver, heading west. As we slowed to navigate the turns and tunnels of the Rockies, […] 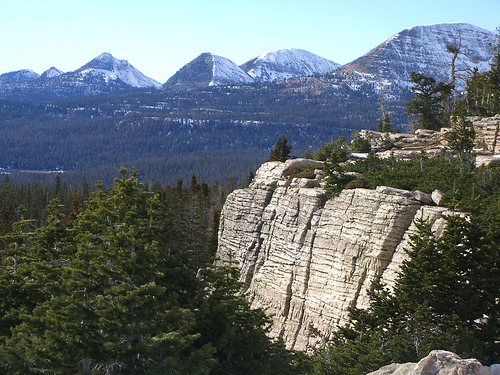 Oil under the Rockies, like the Utah's Uinta mountains pictured, could be an ecological time bomb. [credit: radven, flikr.com]

I’d already been sitting on the train for 18 hours when we pulled out of Denver, heading west. As we slowed to navigate the turns and tunnels of the Rockies, my mind began to stray toward the ground passing beneath us. There is an estimated 800 billion barrels of oil buried under the Rockies; it is known as oil shale. This amount far outstrips the Saudi Arabian crude oil reserves.

There are, of course, obstacles. Oil shale is not so easy to collect as conventional crude oil. It is locked up in the rock in tiny cracks and pores, and extracting it requires immense amounts of water and heat.

The oil shale reserves in Colorado, Utah and Wyoming have been known for many years, but it has been considered economically unfeasible to extract it on a large scale. The economics of the equation appeared to change during 2007 and 2008 when oil prices around the globe rose so drastically. As a result, even though prices had already dropped sharply by the latter third of 2008, President Bush took it upon himself to open the door to oil shale extraction by 2015.

The problems with large-scale oil shale extraction are numerous. Pushing the oil peak back a few years is more Band-Aid than actual solution, and pushing money toward oil shale would push it away from renewable energy projects.

The local environmental impact is another story. As my train pulled to a stop to allow a half-mile-long, coal-filled freight train to pass loudly by, I imagined the cars filled instead with mined oil shale. If oil shale extraction were to move forward on a large scale, pristine mountain areas would turn into large-scale mountain-top mines and wildlife would be pushed away from natural habitats. Quantifying the carbon dioxide that would be expelled into the atmosphere both as a result of the mining and the subsequent burning of the extracted oil is nearly impossible. The only country in the world that relies primarily on oil shale for energy is Estonia, and it has seen substantial pollution problems from their oil shale operation; furthermore, the power industry used 91% of all the water consumed in the country in 2002.

For now, I can enjoy my train trip through the Rockies with the wilderness still intact. But the I’m-on-my-way-out-anyway actions of President Bush have brought this area’s desolation into frighteningly clear focus. Hopefully, the new administration will reverse the move, putting the Rockies’ oil reserves off limits once again. There are better solutions to an impending energy crisis than oil shale.

The Heat Beneath Your Feet: DoE’s geothermal plan

If hydrocarbon production from oil shale is to be developed on a significant scale it will very likely be through in situ retorting and not through mining. Even if it were mined, the mined shale would be processed on site … so there would not be any train cars of shale moving anywhere … a minor point but it highlights the fact that you haven’t done your research.
“Quantifying the carbon dioxide that would be expelled into the atmosphere both as a result of the mining and the subsequent burning of the extracted oil is nearly impossible.” Actually, no it’s not.
“If oil shale extraction were to move forward on a large scale, pristine mountain areas would turn into large-scale mountain-top mines and wildlife would be pushed away from natural habitats.” No. Mountain-top mines are not how oil shale would be developed. You are making that up based on a previous train ride through West Virginia.
As you say, “There are, of course, obstacles.” Chief among them are the energy balance, the water supply, and the potential for water pollution. But the technology picture is always changing … there may be ways to solve these problems … and as a country we cannot simply ignore the possibility that we will need to develop this resource at some point. It may make sense, from a political, economic and environmental standpoint, to develop oil shale at some point.
“For now, I can enjoy my train trip through the Rockies with the wilderness still intact.” Yes, and you can do that because someone drilled an oil well and produced the oil and built a refinery and made it into diesel and put it in a pipeline and sent it to the train station.
As a nation we need to look at the real costs and benefits of all of our energy options … with the eyes of scientists … and figure out how to proceed. We shouldn’t take options off the table because it makes us feel better on our train ride.

“We should’nt take options off the table because it makes us feel better on our train ride”,as quoted by previous comment.
Im mean really,if that was the attitude of everyone you would have companies like Rio Tinto given the possibilty of setting up a Copper Mine in the Grand Canyon.
Any options that involve extracting crude oil from these area’s of the rockies,are simply based on shorterm monetary greed,as any scientist involved in energy know’s full well
Enjoying a train ride through the rockies should be for ever,not just for me of this generation

As both a naturalist and a geologist, I have to agree with K. Lang about the author’s poor understanding of oil shale and the extraction processes. Environmental fright tactics ruined any legitimacy that may have been presented in the article. With that said, I feel that the author and scienceline should have a basic understanding of oil shale, drilling, extraction methods, and their impact on the environment before writing such an article. When they do, I would love to read about the realistic environmental issues that may one-day threaten the area. Please, don’t try to scare us with a train-ride day-dream.

I agree entirely that the author has learned very little about oil shale or how it would be produced in the western U. S. The most prospective oil shale are looks nothing like the picture at the top of the page, which does not even depict oil shale. If the website wishes to focus on science, it should avoid posting poorly researched opinion pieces like this one. The disaster scenario he spins could only occur if every environmental regulation passed in the past century failed miserably to contain the impact. It is, at the very least, unscientific to imply a kind of destruction that would certainly violate the spirit and letter of those laws without so much as learning the difference between surface and in situ methods for extraction of shale oil. The author could learn a great deal about oil shale by reviewing the proceedings of the Oil Shale Symposia, held in Colorado every year since 2006. See these results at: http://www.ceri-mines.org/oilshaleresearch.htm)
Jeremy Boak, Co-Chair
30th Oil Shale Symposium

Simply desire to say your article is as surprising.

The clearness in your submit is just cool and i can suppose you are a professional on this subject.

Fine with your permission let me to clutch your RSS feed to keep up to date with forthcoming post.