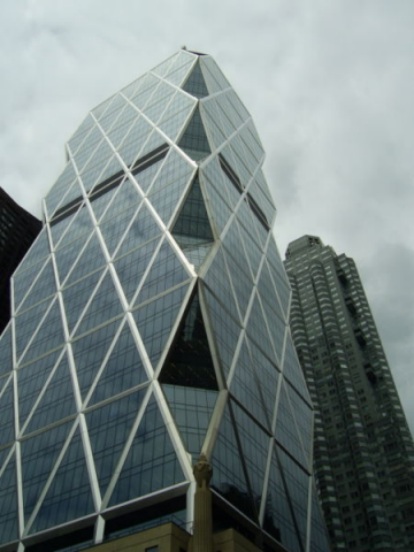 Architects are popularizing sustainable design and becoming the unlikely leaders of the environmental movement. Green architecture can improve a building’s energy efficiency and reduce costs while having less of an impact on the earth.

“The construction industry more than any other industry has the ability to make a deep and lasting impact in terms of sustainability,” David Ennis explained to his green architecture class at Baruch College in February. “There is definitely change afoot right now.”

Green or sustainable architecture, defined as development that meets the needs of the present without compromising the ability of future generations to meet their own needs, can be seen in buildings throughout New York City. Recent constructions, such as Seven World Trade Center and the Hearst Building, and future constructions including the Freedom Tower, are designed with features that produce energy, save water, and provide some economic benefit.

“When you are looking at developing a green building, you should look at what is free. The sun is free, the wind is free, your geography is free,” said Ennis. These renewable resources can be used to power or cool a building so that building construction and maintenance is cheaper and more energy efficient.

When architects are building a green structure, life-cycle costs of building materials are evaluated. Shipment, replacement, and disposal costs are incorporated into this financial analysis. “Landfill fees actually more than justify the cost of reusing and recycling,” said Ennis.

If a certain material costs more to ship, a cheaper local material may be used in its place. Rare materials are also more expensive, so using materials from rapidly regenerating sources, like bamboo and coconut, can reduce building costs because they are more widely available, Ennis explained.

Developers are also realizing the economic benefits of green design. As the costs of oil and natural gas increase, it is more important to create energy efficient buildings. Architects should be aware of how renewable resources could help reduce energy costs. The Freedom Tower design includes wind turbines at the top that could provide up to 20 percent of the electricity the building will need, according to a United States Department of Energy Newsletter.

Installing the latest photovoltaic cells, or solar panels that collect energy from the sun, can also offset the costs of buying energy from the utility company. The Solaire building in Battery Park has solar panels built into its façade. This energy can be sold back to the utility company. Architects are, “taking their best practices of conventional building and combining them with new technology,” said Ennis, who also runs a sustainable design architecture studio at the New Jersey Institute of Technology.

Just implementing small changes to a structure, however, won’t help conserve much. Calling a structure “green” because it has only a few sustainable components is “like saying low-fat ice cream,” he said. Architects should recognize direct and indirect impacts to the environment. Sustainability “has to be integrated throughout the entire process,” said Ennis.

Ennis is teaching this process at Baruch College, and professors at other schools are following his lead. Yale University announced in February that it will offer a green architecture certification program this fall, according to the school’s website.

Green architecture is receiving attention in other venues as well. The Skyscraper Museum in Battery Park has an exhibit on green design titled Green Towers for New York: From Visionary to Vernacular. The display, which runs through August, focuses on 15 structures such as the Goldman Sachs new world headquarters, the Condé Nast building, and the new Memorial Sloan Kettering research building. The designs for these buildings all incorporate green technology through methods like building at angles that will reduce heat from the sun and capturing rainwater to cool the building and flush the toilets.

Government regulations also support sustainable structures. The Battery Park City Authority has environmental requirements for buildings erected there. A bill signed by Mayor Bloomberg this year requires any nonresidential buildings that cost $2 million or more to follow Leadership in Energy and Environmental Design (LEED) standards by January 2007. These are guidelines that “promote integrated, whole-building design practices,” according to the United States Green Building Council.

The downside of those regulations, however, is that documenting LEED certification can increase building costs by 15 to 20 percent, with no added benefit other than a title, explained Ennis. Those standards may bring attention to the green architecture movement, though, by making architects consider their structure’s effect on the environment.

Green building is poised to explode within the field of architecture, according to Ennis, so now is the time for architects to get on board. “It’s always easier to hop on the train when it’s waiting at the station and not speeding down the tracks,” he said. “Now is the time.”

Comprehensive information on a new trend. I enjoyed reading this article!

Well written. It would be amazing for New York to adopt some of the lasting effects that cities like Seattle are working towards. I am currently involved in green building in North Carolina. Some of the more educated retirees really are looking at “off the grid” housing. Solar powered, solar heated-water, site milling and other techniques are being used on top of recycled products.

Random: I wonder if you are the same Susan Cosier from Hurricane Relief 2004. Still have your cd.

Hey! Thanks for sharing this info. It feels so great to see that more and more people are working responsibly towards environmental sustainability. Green buildings are actually becoming increasingly popular in most part of the world and it’s definitely a great step towards healthier environment. Green buildings can really help us save more energy and other resources, and reduce our carbon footprint.