Mysterious sleeping disorders make life a misery for those afflicted. 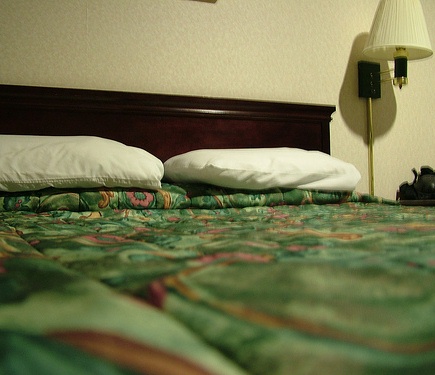 Last week, I watched an enthralling show about medical mysteries on ABC. It opened my eyes to a number of rare sleep disorders.

One of the syndromes it focused on was Kleine-Levin Syndrome.

According to the show, those who suffer from this condition sleep up to 20 hours a day, and during the time they are awake are completely disoriented. Often, they have no memory of the events that occurred while they were previously awake. They can sleep for weeks, months or even years: It’s like they are in hibernation.

The show presented the example of the Farber family, in which both of the children, a brother and sister, have the syndrome. The brother was in “hibernation” when his grandfather died, and he has no idea even today that it happened.

Another frightening example was of the Delein family. Their 10-year-old daughter had a bowling birthday party―sounds pretty sweet, right?―but she sat on her grandfather’s lap the whole time, hysterically crying, and she has no recollection of it.

During the taping of the show, the little girl relapsed and is currently in “hibernation.”

According to the show, doctors, when confronted with the symptoms, usually think those afflicted with the disease are just plain-ol’-nuts. Sometimes they call Child and Family Services to have the families investigated because they think the parents are just letting their kids do whatever they want―for instance that they are just faking the illness to get out of school.

These people have lost large chunks of their lives, leading experts to think that those fairy and folk tales about Sleeping Beauty and Rip Van Winkle may be true after all. When they wake up, the world has changed, but they have been frozen in time.

Some people who have the syndrome are not even aware of it. For example, immediately after the airing of the ABC show, a woman posted the following message on the board run by the Farber’s website:

Topic: THANK YOU PRIMETIME
Posted by: Kelly at Wed Jul 26 20:09:04 2006
Message:
Twenty years later – finally a diagnosis! I spent my senior year of highschool in and out of this horrible syndrome! I was told I was on drugs, threatened to be kicked out of school for missing so much time, put in the hospital & eventually the psychiatric ward. My parent’s struggled for a year until one day it just never came back (THANK GOD). I am so very happy to finally have some peace of mind, some assurance & that it wasn’t “all in my head”. THANK YOU, THANK YOU Your description on this site summed up everything I went through – amazing. If only I could turn back time (not that there’s a cure YET but now we’re on the right track!)
Kelly

But that’s only one of the disorders that the show presented. Another―equally unusual―disorder was Sexsomnia. People with Sexsomnia try to have sex with their partner while they are both asleep.

Those with Sexsomnia are often tried in court for rape, but are often acquitted because they really have no idea what is happening.

And the show also chronicled people who become violent or even suicidal while asleep.

One sufferer on the show dreams about being attacked by birds, and then wakes up to find himself pounding his wife in the back of her neck.

Another man ran out into the road in the middle of the night and was run over by a truck and killed, supposedly acting out a recurring dream he had. And a star tennis player, staying at a motel during an away match, jumped backwards through the motel’s third floor plate glass window when he was dreaming―but luckily survived.

Doctors believe that all of these sleep disorders occur because the area of the brain that houses primal urges, the cerebellum, becomes over-active during sleep, while the cortex, the area responsible for active reasoning, thinking and personality, is virtually inactive.

No one knows what the link is, but people who get physical during sleep―whether trying to have sex or being violent―are often diagnosed with neurological degenerative disorders later on in life, especially Parkinson’s Disease.

Hearing about stuff like this makes me feel better about having a sleepless night once in awhile.

Weiiiiird. Glad I’m only an insomniac.