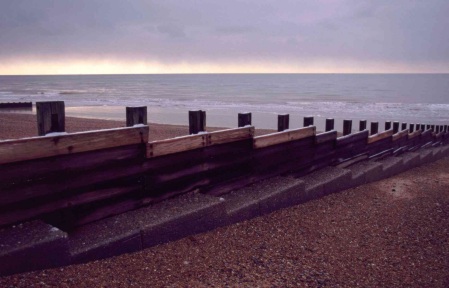 Westhampton, New York, is famous for its gorgeous beaches. For decades, the beauty of the white sand against the blue Atlantic has drawn tourists and residents alike. But Westhampton’s beaches, like many other beaches, are victims of erosion caused by ocean currents, storms, and even man-made projects intended to preserve the shoreline elsewhere.

Jeff Mohl has been a resident of Westhampton for 25 years, and he’s seen firsthand how erosion has changed the beaches there.

“The beach has eroded away each year to the point where it is almost half the size it used to be when I was younger,” he wrote in an email. “People are afraid that their houses can be easily washed away in a hurricane.”

As the sea level threatens to rise at an unprecedented pace, planning ways to maintain stable shorelines is becoming increasingly important task in New York and elsewhere. However, efforts to preserve beaches and prevent damage to the structures behind them are not always successful.

The erosion in Westhampton may be due, in part, to a structural project undertaken by the U.S. Army Corps of Engineers and the Suffolk County government. In the 1960s, the Corps planned to install 11 groins, or walls built into the water to prevent erosion, and the County was going to fill each section with sand to build up the beach. But before they started, a storm punched a hole in the barrier island, so the Corps installed the groins in the damaged area first at the request of the County. The groins were built from east to west, going the opposite direction of the natural beach drift, and extreme erosion ensued. The beaches to the west of the groins are “starved of the sand that the Westhampton beach groins trapped,” says Klaus Jacob, a research scientist at the Lamont-Doherty Earth Observatory of Columbia University.

Years later, the Corps altered the project and installed more groins to prevent erosion, but the original project was never completed as planned, explains Jay Tanski, a New York Sea Grant coastal processes and facilities specialist. “That’s the biggest issue that you have, once these projects are designed,” says Tanski. “You can’t change them for political reasons.”

Not all structural projects end up as such long-term dilemmas. Projects that are planned well, situated well, and built well can effectively prevent damage from sea level increase or storms that erode the shoreline, says Tanski. The most popular way to protect beaches is to replace the sand, a process called beach fill or beach renourishment.

“The single most common type of project we do—and the type of project that we invest the most money in—is beach fill,” says Jeffery Gebert of the U.S. Army Corps of Engineers. This entails dredging offshore sand and depositing it onto eroding beaches.

The first beach renourishment project in the U.S. was on Coney Island, and it has proven successful since the Corps started replenishing sand there in the 1920s. The most effective projects, however, are often the ones you never hear about. For instance, Long Beach, also on the southern shore of Long Island, has over 50 groins that do exactly what they were meant to do: stabilize the beach. “How often do you hear about that? Almost never,” says Tanski.

One reason that some projects are more successful than others is because there are different natural processes at work on different parts of the shore, says Tanski. “You have to make it work in conjunction with nature,” says Lynn Bocamazo, a coastal engineer for the Corps’s New York District.

Rising seas may make it more difficult to maintain the beaches and the structures behind them. Right now, the sea is rising one foot per century, as it has been for the past 3000 years. In certain periods of Earth’s history, however, melting ice sheets and expanding water caused sea level to rise more than three feet every 20 years. If present-day global warming causes the Earth to heat up at a similar rate, people could be seeing much more significant changes along the coasts. Evidence also shows that global warming could contribute to more severe and more frequent storms.

But just because the seas are rising doesn’t mean that people should abandon beach preservation, especially if there is development behind the sandy shores.

“Do you go to the doctor?” asks Tanski. “Do you ever put gas in your car?” Maintenance might be worth it in the short term, which in beach-erosion terms is decades instead of millennia. “In some cases your car might not be worth a tank of gas, but in some cases it might be worth it depending on the use,” he says.

The science of coastal processes is a relatively new field, explains Tanski, and even the experts are still exploring new ways to mitigate disaster. The Corps has a program that helps fund state of the art erosion control measures that are engineered at their research and development center in Mississippi.

To prevent beach erosion in New Jersey, the local, state, and federal agencies sank concrete barriers, which are similar to highway divides, along the shore to interrupt waves on their way to the coast. The barriers “act as a sill to help hold the beach,” so the seas will not reclaim as much of them, says Gebert form the Philadelphia District of the Corps.

According to some people, the best method may be to let the beaches migrate naturally, no matter how unpopular the idea. “The safest solution is to retreat from the coast. Of course it is—in the short term—the most expensive, disruptive and unpopular. But in the long run it is unavoidable in some areas,” says Jacob, from Columbia. “It’s a matter of time only. I encourage planned retreat, rather than retreat after catastrophes.”

In Westhampton, however, it’s unlikely that residents like Jeff Mohr will be willing to give up their ocean view property in order to allow the beaches to migrate naturally. Instead, they hold out hope that future engineering projects will protect the Westhampton beaches, avoiding the mistakes of the past. Then they may finally be able to overcome their fears of the ocean swallowing not only their beaches, but their homes.

You are amazing, Susan. Another great article, in which I can hear your emerging voice!