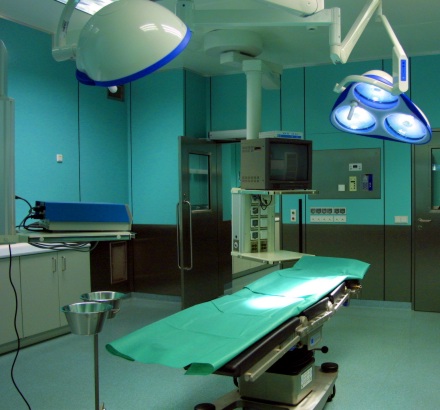 Maria Tejere awoke early one June morning with severe pain in her abdomen and heavy vaginal bleeding. Something was going horribly wrong with her third pregnancy.

Tejere was quickly rushed by ambulance to nearby New York Hospital Queens. Upon arrival, doctors hurried her into an examination room for an ultrasound.

Dr. Gary Scott Eglinton was one of the doctors who attended to Tejere that day. “The fetal heart-rate was disturbing,” said Eglinton, Chairman of Obstetrics and Gynecology at NY Hospital Queens.

The placenta—the organ that nourishes a developing fetus—had detached from the wall of Tejere’s uterus and was bleeding profusely, a situation that could kill both mother and child.

“The amount of bleeding is only comparable to that of a gunshot wound to the abdomen,” says Eglinton. “It’s a horrendous amount of blood.”

A hospital worker on the scene pulled a blue tab on an intercom, summoning an emergency team of obstetricians dubbed “Team Blue” to the pregnant woman’s bedside.

Thirteen minutes and one emergency C-section later, both mother and baby Matthew lay in bed, alive. Thanks to quick responders like Team Blue, lives are being saved when unexpected pregnancy crises arise—but the New York City maternal death rate remains much higher than the state and national average.

Seven times more women die during labor in New York City than in the rest of New York State, according to the results of a report released in June 2006 by The Safe Motherhood Initiative (SMI). These findings have led policymakers and hospitals to reevaluate how delivery rooms are run in an effort to lower the number of maternal deaths in New York.

Two to three women die each day in the United States due to pregnancy complications. Excessive bleeding, which can result from both natural and Caesarean birth, is the leading cause of maternal death in the US. But although the maternal death rate in most of New York State is lower than the national average of nine deaths per 100,000 births, New York City’s much higher rate brings the entire state’s average to 13 deaths per 100,000 births.

The authors believe that the difference may be related to demographic and social differences between city-dwellers and those who live elsewhere in the state.

“More hemorrhage deaths occurred among black women than white women and women of other races and ethnicities combined,” says Katy Stevenson, the Director of SMI. African-American women are three times more likely to die from pregnancy related complications than white and non-Hispanic women, according to the report.

In order to improve maternity care, hospitals across the state are starting to update their delivery room protocols and educate health care providers about ways they can prevent maternal mortality, according to Stevenson.

“Team Blue,” which started in 2001, formed before the SMI’s recent report, but its founders hope that the strategy will be picked up by other hospitals in New York.

“At our hospital we had two maternal deaths from 2000-2001, but since ‘Team Blue’ was initiated, we’ve had zero,” says Eglinton of NY Hospital Queens. The authors say these findings, published in the May edition of Obstetrics & Gynecology, prove that changing established procedures in emergency delivery rooms can save lives.

While the numbers seem small, they are particularly impressive in light of an increasing number of cases of massive maternal hemorrhaging nationwide, says Eglinton.

Experts believe that this trend is due to the increasing age and weight of the average pregnant woman. Older and heavier women are more likely to have high blood pressure and diabetes—both of which are strong risk factors for excessive bleeding during labor, says Eglinton.

A woman who is planning on becoming pregnant should meet with her doctor to discuss any risks she may have that would jeopardize her health during pregnancy. And women who are already pregnant should have prenatal care throughout their entire pregnancy, recommends Stevenson of SMI.

Stevenson stresses that the higher maternal death rate in the city is a reflection of the city’s demographics and not indicative of the quality of healthcare available—women should not be afraid to deliver their babies in New York City hospitals. The city “has some of the best doctors and medical facilities in the country,” according to Stevenson.

SMI hopes that their findings can help New York reach the nationwide goal of about three deaths per 100,000 births by 2010—an aim set by Healthy People 2010, a national program designed to combat various health crises and eliminate health disparities between different populations by 2010.

I’m not surprised to see that this is more common among minority populations, and would be interested to see if this is the case all over the country. With the anniversary of Katrina in a few weeks, it’s still painfully obvious that economic differences translate into a lot more than being able to buy the latest gadget or coolest jeans.