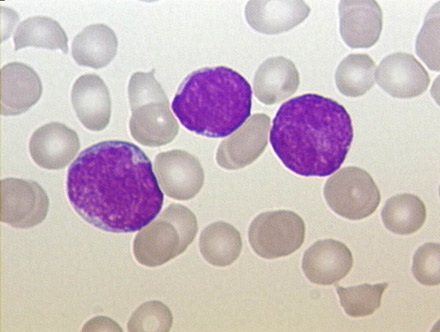 Leukemia cells highlighted with a Pappenheim stain. [CREDIT: CHRISTARAS A]

It was hot that summer in 1996, Gayle Serls recalled, so she had blamed her constant fatigue on a sweltering Southern July. It wasn’t until August that the pain and symptoms—the nausea, the fainting, the vomiting—became unbearable. At that point, the athletic Durham, N.C., native who exercised frequently and ate healthfully became a patient at Duke University Medical Center. She was diagnosed with acute lymphocytic leukemia, a fast-growing cancer of the white blood cells.

Serls suffered through weeks of chemotherapy, and was able to beat the disease into remission within a month. But that wasn’t the end of her treatment. Follow-up tests revealed Serls’s leukemia was a rare kind that would not stay in remission. That’s when her doctor started talking about a bone marrow transplant.

But before she could begin her treatment at Hopkins, Serls relapsed, literally on the medical center’s doorstep. She couldn’t go through with the bone marrow treatment, and was immediately flown back to Duke for chemo again.

Just days before her daughter’s severe relapse, Serls’s mother watched a television news report on a new leukemia treatment. It was called an umbilical cord blood transplant, and it was very experimental, with a low survival rate. Serls didn’t care—she was desperate.

This wasn’t the case in 1996, when Serls was dying from acute lymphocytic leukemia. The procedure was largely experimental, and though she didn’t have much to lose, she also didn’t have much of a choice.

Finding hope in an experimental procedure

Cord blood is the blood leftover in a baby’s umbilical cord immediately after birth. It is usually thrown away. Lately, its collection has gained popularity because of the value of the stem cells found in the blood. These are cells in a state of “identity crisis,” which have not morphed into specific cell types (such as liver or heart tissue), giving them excellent potential to adapt to another person’s body. In patients with leukemia, a cancer that prevents the body from creating healthy blood cells, transplanted stem cells can become the blood-making cells the body lacks.

In the article, he notes some of the limitations of the treatment—such as survival rates and the amount of cord blood needed to treat an adult patient—but also notes its many benefits, which have increased over the years.

At the time Serls underwent treatment, many kinks in the procedure hadn’t yet been worked out. As soon as her mother told her about cord blood transplantation, Serls tracked down Mary Laughlin, then an assistant professor of medicine at Duke University, who was conducting a clinical trial on cord blood transplants in adults. Laughlin was a pioneer; the treatment had been common only in children at the time.

This was something I was looking into but all of the banks require money to have it stored? I beleive if it was free to give it to research or to bank it for someone that might need it in the future would be wonderful. Since we couldnt afford it we didnt give my daughter’s cord. I just think it is amazing that science has come this far. We just need help with the education from the doctors. And like i said i would have loved to give her cord up for science but the organizations that i found wanted money to store it? Maybe there is some out there that i dont know about but it would be wonderful if that could happen in the future.

You actually can donate cord blood, free of charge, to public donation programs. The two big cord blood collection agencies — the National Marrow Donor Program and the New York Blood Center — have collection programs. Many, but not all, hospitals also have programs, but you’d have to check with your local hospital first.

Private storage of cord blood — which it seems you were encouraged to do — is very different from public donation. Much of the literature has concluded that private storage is not as useful as public donation, but many parents still pay thousands of dollars in storage charges each year. They see it as an “insurance policy” that can provide a “cure” if their child does end up with a disease like leukemia or lymphoma. However, doctors typically won’t use the child’s cord blood to treat him or her if such a disease arose from the child’s cells in the first place.

If you are considering having another child and donating the baby’s cord blood, I’d look into the above-mentioned public banking programs, or call your local hospital.

Cord blood stem cells are in fact extremely useful in clinical practice for the treatment of blood disorders and have been transplanted over 6000 times worldwide for 45 different diseases. Most transplants have either been from public cord blood units or private units transplanted to siblings and to parents.

Cord blood stem cells also have massive potential in the treatment of other diseases as cord blood contains mesenchymal stem cells capable of making many tissue types. The main research drive in our new lab in Manchester UK is to create nerve, insulin secreting and muscle cells from cord blood stem cells which will hopefully be suitable for transplant.

I am the scientiic adviser to a clinical trial in Canada using cord blood stem cells to treat MS (www.nhor.net). If this approach works it will revolutionise the treatment of MS and related neurological disorders.

Cord blood stem cells are derived from cord blood which is biological waste. They carry no legal, ethical, moral or religious objections to their use.

If anyone needs any more information on cord blood stem cells please do not hesitate to contact me.

Is there any present or future use (clinical trials) for using cord blood for treating Hepatocellur Carcinoma (HCC)?

And is this the same as sibling leucocyte infusions?

My brother has HCC and may not be able to get a liver transplant.

There is ongoing research on the use of cord blood stem cells in the repair of the liver. These will probably be used in the long term for non-malignant liver disease such as sclerosis.

If your brother is due to recieve high dose chemotherapy in the future which would damage his own bone marrow then cord blood stem cells could be used to repair the bone marrow after chemotherapy.

There os also ground breaking research by Professor Habib and his team at Imperial College in London UK. He is using mobilised bone marrow stem cells, collected from the patient, in liver repair.

I am sorry that I cannot be more definite at this stage but rest assured everyone in the stem cell world is working as hard as possible to help people like your brother.

My wife and I are considering saving the cord blood of our first child. Can I assume that if we were to need the use of this resource it would be easily accessed and doctors in my community would be educated enough to use it properly? Are we ready for the average US working class family to go to this expense and benifit from it’s uses with costs of converting it into useful treatments that are affordable?

Thank you for these interesting questions.

Once frozen and stored for family use a cord blood unit is available immediately at the request of the parents in collaboration with the hospital or transplant untit associated with the proposed treatment. Doctors are well aware of the use of cord blood stem cells although I have to admit that some doctors still need convincing. The public, the media and of course scientists like myself jave a big role to play here.

There ar of course other sources of stem cells such as from the patient him/herself (peripheral blood and bone marrow) and from bone marrow donors. These stem cells must be an exact match to the recipient. There are also excellent public cord blood banks providing cord blood units for trasnplant to anyone in need.

There have been around 6000 cord blood stem cell trasnplants to date for 45 different blood diseases. These transplants are mainly to siblings and parents when considering privately stored units. The chances of trasnplant of a private unit to the baby itself are around 1:20,000 and the the rest of the family around 1:10,000. The risk is therefore low but the potential benefits if needed are high.

The cost of cord blood storage in the USA is, in my opinion, far too high. Prviate companies seem to be making massive profits in this area. My own company, http://www.cordbloodbank.com, has fees as low as possible to enable anyone who wishes to store privately to do so.

The treaments themselves, using ocrd blood stem cells, are no more expensive than the same treatments using bone marrow.

You may find http://www.parentsguidecordblood.com useful.

I was wondering if the cord blood could be used to help cure MS? If so, can it be used for adults that are deep into the MS syptoms? Thank you for your time!

According to the National Multiple Sclerosis Society, there is no treatment available for MS patients involving cord blood cells. Researchers are still experimenting with regular bone marrow transplantation as a treatment for MS.

Iam studyng microbiology -biochemistry at the Potchefstroom university and have a very large passion for cancer research and would like to know more, please!

My son has cerebral palsy. He is 22 years old. I don’t think they were saving cord blood in 1986. Is there a chance cord blood could help him? What research has been done on cord blood and young adults with CP?

I have an aunt in mexico with a bad liver autoimmunity and bone loss, and her doctors have her on very strong medication that basically knock her down. I am pregnant now and would love to know if banking my son’s cord blood could possibly cure her or help her.

So what are your thoughts on Stem Cell Research? is it worth the life saved for the “life” sacrificed.

Can any one plz explain me the mechanism of curing of leukemia by cord blood(HSC)…?