The Monarch butterfly may be the next victim of a warming world. 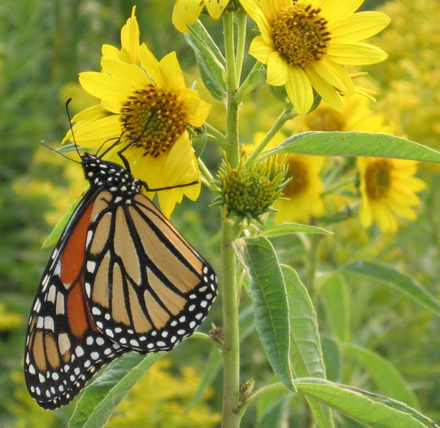 Every autumn, as the leaves change and temperatures drop, brightly colored Monarch butterflies journey thousands of miles through strong winds and changing landscapes to their wintering grounds in Mexico. The journey is already perilous, but now researchers say there is a new danger: global warming.

Wetter and colder winters over the next 50 years will make all of the Monarchs’ Mexican wintering sites unsuitable, while hotter summers in the eastern United States and Canada will make it harder for the butterflies to thrive during warm weather, according to the predictions of University of Minnesota entomologist Karen Oberhauser.

Monarch butterflies are especially sensitive to climate change because of their unique migratory cycle. “The whole cycle depends on climate, and the big question is whether monarchs can adapt,” explains Oberhauser. “Monarch butterflies are basically a tropical species that took advantage of a glacial retreat” at the end of the last Ice Age by summering in northern climes, she says. Migrating south allows Monarchs to avoid the fatal winter chill up north.

All Monarch butterflies of the eastern plains winter in the high-altitude evergreen forests of central Mexico; between November and March, more than four million butterflies pack each acre. And it is here that climate change could hit the Monarchs the hardest. The wintering grounds are so small, and are used by so many Monarchs, that researchers believe that a change in climate could be devastating – especially if that change includes the increased rainfall predicted by Oberhauser’s model.

Monarch butterflies can withstand temperatures below freezing, but their delicate wings must remain dry. When rain follows a cold front, the effect is lethal. In 2002, up to 80 percent of the wintering population perished after a rainstorm, said Lincoln Brower of Sweet Briar College. “The butterflies were soaked, and then it got down to negative five or six degrees [with the result of] catastrophic mortality.”

The migratory cycle continues with the butterflies that survive winter. Butterflies moving north in the spring are “down on fat, the wings are worn, and flight is hard because of the winds – this population is on the edge,” explains entomologist Orley Talyor of the University of Kansas. Migrating Monarchs lay eggs en route and die, and the next generations continue north through summer.

In her new computer model, Oberhauser explored the effect of climate change on this summer migration and found that increased heat over the next fifty years is likely to shift habitable area north during July and August. This will stretch their already long migration even further. To adapt, the Monarchs may need to produce an additional generation to reach areas farther north. It is unclear if they will be able to do so. Fewer may be able to make the longer trip back to the winter roost as well.

Lower numbers of butterflies returning to roost in Mexico have already been recorded. In the 2004-05 winter, the “population was the lowest it’s ever been, and if there had been a freezing rain, there would have been a problem,” says Brower. The wrong combination of weather in Mexico and United States could be disastrous. “If there was a big freeze in Mexico, a cold spring in Texas and a bad breeding summer, we don’t know what we could do.”

>>> If you’d like to learn more about Monarch butterflies and even track their migration through your area this winter, click here.<<<

This could have mo info