A New Weapon in the War on Sniffles

The FluChip may revolutionize the way we combat influenza. 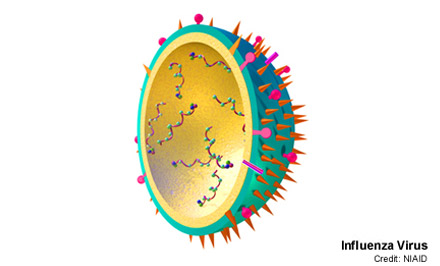 Scientists may soon have a new tool in the annual fight against the flu. It’s called the FluChip, and it could help to quickly recognize and track flu virus infections as they race across the globe, according to a study published in a recent issue of the Journal of Clinical Microbiology.

Biochemists Kathy Rowlen and Robert Kuchta of the University of Colorado designed the FluChip to identify flu samples in seven to eight hours. Current methods take several days. An even faster version of the chip, which would work in two hours, is in development, according to Kuchta.

The FluChip matches DNA from a flu sample to bits of genetic material from previously identified flu viruses. It works like a microscopic pegboard, with known flu genes attached to the tips of the pegs. When the chip is dipped into a flu sample, bits of the sample’s DNA stick to the pegs with matching flu DNA. After scientists determine which pegs the sample has bound to, the flu virus can be quickly identified.

The chip, which the scientists hope will be in production within a year, will be useful to public health organizations, like the World Health Organization and the Centers for Disease Control. It will help the WHO and CDC track the demographics of the disease, including strain, location and the timescale of the virus as it spreads, said Kuchta.

Kuchta also said that the FluChip will help health organizations design vaccines for emerging strains of the virus. Components of flu vaccines are changed every year depending on flu strains circulating in Southeast Asia the year before.

Scientists can also modify the FluChip to identify new strains of flu virus, according to Kuchta. “The chip is very dynamic. If a strain came out that the chip had trouble with, it would be simple for us to put new sequences on it to make it work better,” he said.

Despite its potential benefits, however, the FluChip still faces significant hurdles. A new study found that the chip was only effective 72 percent of the time in identifying flu viruses provided by the CDC. Its accuracy rate was even lower- 50 percent-when used on samples taken directly from patients.

The relatively low accuracy rates are due to the challenges of working with viruses, which have limited amounts of genetic material and are short lived. The FluChip was more effective in analyzing the CDC-supplied samples, Kuchta said, because “the CDC samples had a lot of virus in them. There were many fewer viruses in the patient samples.”

Also, virus concentrations in patient samples decrease over time, according to David Evans, Chairman of the Medical Microbiology and Immunology Department at the University of Alberta in Canada. “By the time you get a clinical specimen, much of the virus may have disappeared,” he said. This makes the amplification step, which is performed before using the FluChip to make many copies of the viral DNA, crucial.

“The amplification steps are a challenge,” said Kuchta, who acknowledged that amplification takes up most of the seven to eight hours currently needed for the FluChip to work.

Evans, who has tried to develop similar flu-identifying chips, said that in part due to amplification difficulties, he is no longer pursuing this research and remains “unconvinced that it’s the right technology for the problem.”

Kuchta, however, is sticking with his FluChip. He said his lab is currently working on ways to improve the amplification process and is also looking into the possibility of eliminating amplification altogether by “developing completely novel technologies that could have a huge impact for all gene chips.”

Wow, this article is not only informative but also extremely well written. Knight gave a vivid and layered description of the FluChip in an easy to understand format. Thank you!