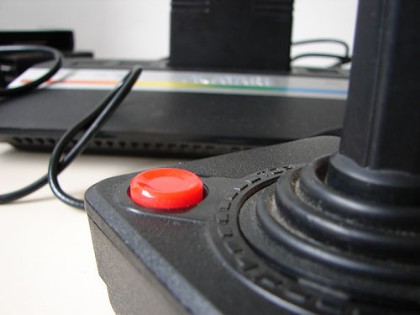 Is there more than just joy in this stick? [CREDIT: fla*]

The American Psychological Association seems to think so. The APA called for a reduction in video game violence in 2005, after reviewing research that suggested exposure to violent video games leads to increased aggressive thoughts and behavior in young people. The APA further compared violence in video games with television violence, but noted that video games are different in that they are interactive and essentially act as learning tools by reinforcing certain behaviors.

For anyone who has played a violent video game, the idea that it can affect you on some level is not shocking. I have my own memories of letting off stress during freshman college exams by playing the fighting game Soul Caliber II with many of the other guys in my dorm, and getting into the thrills of Grand Theft Auto with my three roommates during junior year.

While there are studies that try to make associations between exposure to violent video games and violent behavior in the real world, these do not seem to account for other factors such as family life that probably play a greater role. Henry Jenkins, the director of comparative media studies at MIT, wrote on a PBS website that the consensus (if any) among researchers is that playing violent video games over the long term is merely one risk factor among more immediate real world influences such as a history of violence in the family.

A study by researchers at the University of Illinois at Urbana-Champaign in 2005 provided an interesting look at the long term effects of playing an online video game, Microsoft’s Asheron’s Call 2. Known as an MMORPG, or Massive Multiplayer Online Role-playing Game, Asheron’s Call 2 includes violence in fantasy settings. The game also involves social and cooperative interaction among players.

In the U of I study, test subjects played Asheron’s Call 2 online for an average of 56 hours over a month. Researchers then surveyed both the gamers and a control group of non-gamers and found that the players’ aggression in attitude and social interaction were not different from those of the control group.

Perhaps concern regarding video game violence will eventually subside, as it generally has with books, movies, and television. As the story lines of video games grow more diverse and complex, ranging from the day-to-day management of individual lives in The Sims to economic decision making in games like Civilization and Rollercoaster Tycoon, and even dealing with moral issues in games like Black and White and Fable, perhaps concern about their violent nature will decrease.

In fact, the latest news on video games and violence has nothing to do with gamers run amok. A man in Putnam, Connecticut was waiting in a long line to buy the new Playstation 3 video game console when he was shot in the chest by armed thugs after refusing to hand over his money. Now that’s scary.

To learn more about violence and video games, check out:

thanks i need yjis 4 my science project

thank you, I really need this for my science project

Thanks for the article. It’s nice to see different views once in a while. You covered both sides well.

THx. I was conscerened about my bro

great information! we doing a big project in English class.. anyone able to choice any topic! i choose the violence and video games! great info!

@micro by any chance do u live in El paso, Texas?