Cancer cells may cooperate to withstand their host's immune response. 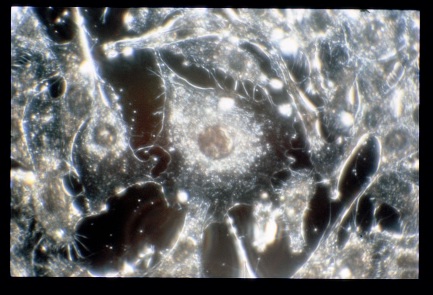 The solution to understanding the earliest stages of cancer development may come from an unlikely source: theoretical mathematics.

A team of scientists from the University of Michigan and Rutgers University has used game theory to develop a hypothesis of how developing cancer cells interact with each other. Typically, game theory describes, in mathematical terms, how members of a social group interrelate. For example, in the movie A Beautiful Mind, John Nash, an eventual winner of the Nobel Prize, applies game theory to dating rituals. He calculates that he and his friends have a better chance of getting dates if everyone in the group does what is best for themselves as well as for the group.

In the new hypothesis, presented in the September 5 issue of the Proceedings of the National Academy of Sciences, researchers suggest a similar scenario occurs among cancer cells. They propose that, early on, cancer cells work together as a group to survive attacks from the host organism’s immune system. This is contrary to the traditional dog-eat-dog view of cancer cell interactions in which cancer cells compete for resources.

In fact, says Kenneth Pienta, a coauthor of the paper, both views may be accurate. Cancer cells probably cooperate during the earliest stages of tumor development. “We think it’s most likely an early to mid-stage event,” says Pienta, who is an oncologist at the University of Michigan. Later, he explains, the relationship between the cells may become more competitive.

Or maybe not. “The role of mathematical models is to look at the dynamics of a hypothesis, and then, if it makes sense, test it experimentally,” says Robert Gatenby, a radiologist at the University of Arizona who also uses mathematical models to study cancer biology.

Pienta agrees. “Our next step is to explore computational models and then to test [the models] in animals,” he says.

If cancer cells rely on each other early on, preventing cells from cooperating may stop the cancer before it starts. Unfortunately, researchers haven’t yet found a reliable way to identify the earliest stages of cancer in humans. Current screening techniques can only detect cancer when tumor formation is already underway, says Thomas Deisboeck, a radiologist and the director of the Harvard-MIT Complex Biosystems Modeling Laboratory.

Even if using game theory to develop biological models does not lead directly to clinical treatments, it can still benefit cancer research by getting scientists to think about old topics in new ways. In the near future, Deisboeck predicts, people will be trained in both biology and theoretical mathematics. Start brushing up on those equations now to beat the rush.

Great article. We miss you!!

What about GABAA receptors?!

Congrats on your article! It makes me want to join this program! Let me know how you’re doing!

Have you ever thought about writing an e-book or guest authoring on other blogs?

I have a blog based upon on the same ideas you discuss and would really like to
have you share some stories/information. I know my visitors would value your work.
If you’re even remotely interested, feel
free to shoot me an e mail.