Julie Rauer on the ‘Line 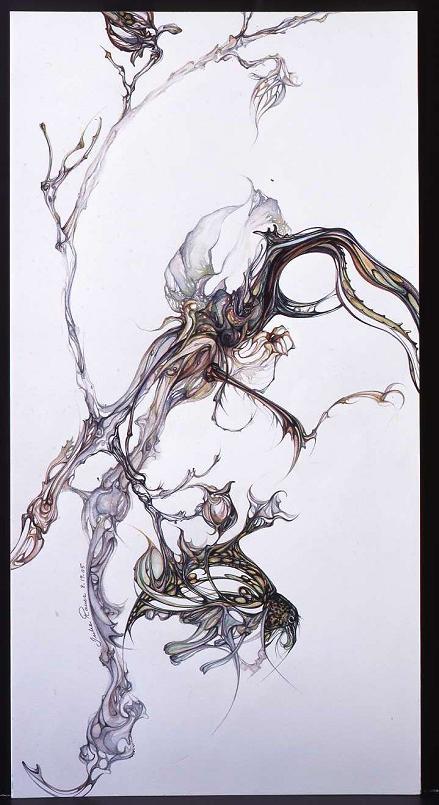 –This is the second installment of the ‘Line’s Q&A series.–

Julie Rauer is not a scientist. She is not an entomologist, an anatomist or an archaeologist. Neither is she a master Chinese chef. But somehow the artist, a 42-year-old Manhattanite, is all of these.

With sparse, precise brush strokes reminiscent of ancient art from the Orient, Rauer brings to uncluttered life her decidedly deceased crustacean, insect, fish, and vegetal subjects, which she uses as springboards to create what she calls, “metaphysical still lives.” Her ethereal paintings explore the edges and plumb the depths of the natural world while simultaneously piercing the canvas of human emotion. The force of her vast and varied experience echoes throughout her deftly wrought watercolors and drawings, finally confronting the viewer at the intersection of emotion and reason.

She finds inspiration in the halls of art museums and the display cases at the American Museum of Natural History (AMNH). One day’s muse may be a hulking, ancient Bodhisattva sculpture; the next, a desiccated beetle pinned for motionless eternity behind museum glass.

Rauer’s current exhibit, “Chimera,” is at the Berwald Oriental Art gallery, 5 East 57th Street in Manhattan, from December 8 through 22. For more information about the exhibit, click here.

Click here here to view a slideshow of some of Rauer’s work.

Bob Grant sat down with Rauer in her lower Manhattan studio to discuss where the worlds of science and art collide.

BG – You have described your work as “metaphysical still life.” Can you talk about that?

JR –This one is “Undaunted by the Impossibility of the Truly Delicate.” Chinese lanterns, Japanese fire maple leaves, you will find that the stalks are human bones. They are the stalks, and they are accurate to the stalks, and they are accurate to the human bones. They are the tibia and the fibula. There are human aspects of the chest cavity, of the heart, the hands, the fingers – mine actually – intertwined. We are always poised on the verge of non-being, of disintegration, of nonexistence, as is the paper-like structure. And as it wears away, you get a rocking cage, a skeletal cage. And when it comes apart, it becomes, to me, the most interesting. You see inside. It’s like seeing inside the flesh of a human. And I don’t draw any difference between human flesh and plant flesh. I think you can understand many aspects of human existence through the processes of plant growth, of decay, of reproduction. So that’s some of the metaphysical aspects. It’s not just drawing what you see. It’s starting with what you think. And then there’s a very long interpretive process.

BG – Did your fascination with Asian culture start when you were in school?

JR – It goes back to a childhood in Chinatown. Basically I spent almost my entire childhood in Chinatown because my parents ran a Chinese grocery store and taught Chinese cooking. I’m actually a trained Chinese and Southeast Asian chef. And I grew up in the museums. I mean, we were in the suburbs, but I grew up in the Metropolitan Museum of Art and the American Museum of Natural History, so art and science ran parallel courses throughout my entire life.

I actually took, in the second grade, a series of dissection courses at a local college. And then in second, third, fourth, fifth, I dissected things; fetal pigs, frogs, nightcrawlers, you name it. I was as influenced by my science teachers as much, or more so than, my art teachers.

BG – What types of things caught your eye at museums as a little girl?

JR – The Japanese armor was fabulous. The swords were incredible. The Southeast Asian sculpture, always. The Goneshes. The demons. I was drawn to the dark stuff. I was a Goth chick in school. I love the Dutch painters then and now, especially the still-life painters of the 1600s and 1700s. People like Willem Kalf and Pieter Claesz. They would describe the structure, the brevity of life, the fleeting essences, the transparencies, all of the subtleties of human emotion, human intelligence, human life, through lobsters, through lemons. You would see through a lemon to its skeleton. You’d see through the skeleton of the lemon to a lobster. You’d see through that to a shrimp. And the shrimp looked like marble and stopped your eye like a wall. So that’s what I do also. I play a lot with transparencies. Watercolor is the right medium for what I’m trying to convey. It’s very portable. You take it to the museums. You take it in nature. Every naturalist who painted really tended to – especially if they traveled around a lot – work with watercolors.

BG – I met you at a meeting of the Entomological Society of New York. How long have you known those guys [entomologists at AMNH], and how long have they let you draw their bugs?

JR – I’ve been going there for a couple of years, and it’s really through Lou [Sorkin, an AMNH entomologist], who is fantastic. I made contact with him because I really needed new structures to attack, and I found that stores that sell the insects are hugely expensive. They’re $300, $400 for the big specimens. And you often can’t get what you need. The first painting I did [at AMNH] was a male unicorn beetle. And I went on to a painting, called “Entropy,” which is on the collision between a dragonfly and a walking-stick insect, and the unraveling of the social fabric. That was done at the museum inside the department of entomology.

BG – You have said that you dissect your subjects in your head. Were you doing that as you were drawing these insects in the museum?

JR – I went straight from looking at them in the cases to the finished painting.

BG – Take me through your mental process.

JR – Specimens are pinned into the cases, so I couldn’t move them. I couldn’t take them out. So I just basically sat there and rotated the specimens around in my head, kind of looked right behind the eyes, looked at the body, looked at the wings, flipped them upside down, took them apart, took the little panels out of the veins, shuffled them around, and re-shuffled them until I decided to go with a collision of the two [walking-stick and dragonfly]. And then I combined the exoskeleton of the walking-stick insect with my [mental] images of the surface of the moon. So you do have a lunar surface, almost a collision of celestial bodies at the same time, and a doctrine of inevitable social human decline, which is the nature of entropy.

But a scientist is looking to understand this particular thing as accurately, as completely, as fully as possible. For them, I believe, [drawing] is a tool for study. It’s a tool to understand the functions, the structures, the systems. So they are not looking for their dreams and their nightmares and aspects of the human condition in there. It was very funny, Lou came in one day, and I heard him counting [while looking at “Entropy”] I hear, “18, 19, 20….” I said, “Lou, what are you counting?” He said, “There aren’t 36 hairs on that leg!” I said, “No, no, no. There aren’t supposed to be.” He said, “But there are 36 hairs.” I said, “Yeah, but my goal isn’t to depict all 36 hairs.” But for him, that’s his goal.

BG – So do you think that science and scientists would be served by allowing some of their dreams and nightmares and thinking about the human condition into their work? Would it enhance their knowledge?

JR – Well, I think in terms of pure research, no. If they are a researcher after really certain things, they have a parameter that they’re working in. I think it would open up entire other doors in terms of their own intellectual growth, absolutely. Actually, I don’t think, necessarily, that it wouldn’t further their work as scientists, because it would bring in other disciplines that maybe didn’t get in there. It would maybe foster connections between, say, entomology and archaeology. A lot of the great inventions were made by people who stepped outside their fields of study.

BG – If you started the Julie Rauer School of Art, what would the curriculum be?

JR – The curriculum would be a constant parade of scientists and, yes, mathematicians – because I know there are people who can teach it well out there – and philosophers and historians. I would have people that taught art, certainly. But the students would learn side by side as much about everything else. It would be a very holistic approach, with lots of field trips.

This interview discloses essential details about the transformational tendencies of an artist’s imagination. Julie Rauer’s work, as suggested by this dialogue, fuses the tangible with the intangible aspects of existence and therefore embodies the premise of “artist-as-bridge” between the seen and unseen.

I was fascinated by Julie Rauer’s singular amalgam of science and fine art, specifically the ephemeral, transformative properties and heightened detail of this painter’s work. The ontological underpinnings brought to the scientific table numerous issues heretofore unaddressed in more conventional work. Bob Grant wrote an incisive, finely honed piece which perfectly captures this artist’s complexity and vision of the natural world.