I heard about a bandage for soldiers that’s made from shrimp! What’s in shrimp that makes these bandages effective? 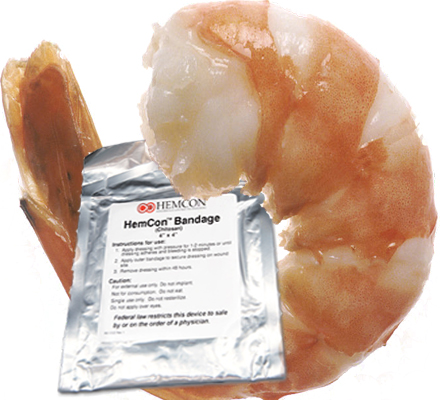 Throw another shrimp on the barbie…or should I say, battle-wound. It’s true: HemCon Medical Technologies, a six year old start-up company from Tigard, Oregon, produces a bandage that uses shrimp.

The magic ingredient in the HemCon bandage is chitosan, a complex carbohydrate polymer that creates a weblike surface which helps to instantly stop blood loss. HemCon began developing their hemorrhagic control, or HemCon, bandage for American soldiers in 2001 when it was discovered that chitoson can stop severe bleeding in under two minutes, according to HemCon and U.S. Army officials.

Bandage development starts in Iceland, where chitosan is extracted from shrimp shells. The chitosan polymer is mixed with vinegar to form a gel, which is then cast into its bandage shape – four inches square and half an inch thick. After being freeze-dried and backed with a thin sheet of plastic, each bandage is sterilized and sealed in foil.

The advantage of using HemCon as opposed to a normal bandage is that HemCon won’t slip off when wet. Instead, it controls bleeding by instantly adhering to the wet wound site. The bandage facilitates clotting because red blood cells, which naturally carry a negative electrical charge, are attracted to the positively-charged chitosan. As the red blood cells are drawn into the dressing, they create a seal over the wound, stabilizing the injured surface.

Chitosan was first discovered as a biomaterial, or a substance that meshes well with living tissue and/or biological fluids, by scientists at the end of the twentieth century. It is hypoallergenic (since it’s a polysaccaride, which doesn’t aggravate people’s fish allergies), biodegradable in the human body, and naturally anti-bacterial.

Since the polymer has antibacterial properties, it helps ward off infection until a patient can reach a medical facility. HemCon’s also shown to be safer for healthy tissue than other options being used by the military: QuickClot, a coagulant powder employed by the Marine Corps, might burn healthy tissue, according to Army medical officials. The polymer bandage is even reported to be effective for controlling high-pressure, high-flow arterial bleeding, such as what would come from neck, arm, or groin wounds, as well as blown-off limbs. In these situations, where traditional gauze or tourniquets may not contain bleeding, medics using HemCon bandages can control approximately 90 percent of the hemorrhaging.

The shrimp infused bandage is now not only standard issue for U.S. armed forces serving in Iraq and Afghanistan, but also it is being used by medical professionals in hospitals around the country, according to HemCon. Along with the bandage, the company produces a dissolvable, chitosan-based dental dressing for dentists or oral surgeons to control bleeding during oral procedures.

Even though the HemCon bandage is a medical shrimp cocktail, there’s nothing fishy about using chitosan to help clot blood – making it an effective choice for a bandage additive.

Is the chitosan produced from a shrimp by product or are the wee beasties harvested for this particular component of their shells?

Can the chitosan be efficiently produced by chemical synthesis means?

Chitosan, the product, is made from the crushed-up SHELLS of shrimp . . . and also crabs and (when available!) lobsters.

The edible inside of the shrimp, etc., is sold separately for food purposes. The inedible insides are, hopefully, thrown away.

The shells are crushed and turned into ‘chitosan.’ People take it, by the gelcap-full, in order to lose weight. Haven’t heard definite reports of whether it works or not.

I just want to know the exact formulation of acetic acid and chitosan in making the said bandage.The information would be of great help for me because right now I’m having a research study about chitosan from crab shells as a raw material in making bleeding control bandage.

I’m hoping for your favorable response.

Thank you very much!

This bandage is now available over the counter. It is called KytoStat. For more information, visit http://www.kytostat.com.

i’m a 3rd year high school student and we are conducting a research about chitosan and their effect in HDL cholesterol. Associated with the research, we are about to conduct an experiment regarding its effects on rats. Where can we extract more chitosan? from shrimps or from crabs? which is easier to extract from?

i hope for a generous reply to my questions..

With the shrimp impregnated bandages, is there a risk of allergic reaction in those with iodine/seafood allergies?

Is this product hypoallergenic to those highly allergic to shrimp?