A recent study has sparked debate about the safety of artificial blood. 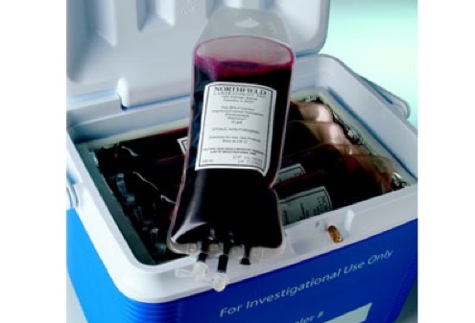 It looks almost like blood, although its deep, dark red color is perhaps closer to beet juice. It also acts like blood, since it can carry oxygen from your lungs to your cells. And while it can be transfused into humans, some contend it’s unsafe. This is artificial blood, and it’s the subject of real controversy.

Since the 1980s, pharmaceutical companies, most prominently Biopure Corporation, of Cambridge, Mass., and Northfield Laboratories, of Evanston, Ill., have tried to develop an adequate substitute for blood. Intended for use in emergency situations, artificial blood has some key advantages over natural blood: it has a longer shelf life, can substitute for any blood type and can be sterilized. It also doesn’t need to be refrigerated, making it easy to carry on ambulances. So far, however, artificial blood has not been approved for use in the United States, and the only ongoing clinical trials are in Africa and Europe. And although one Biopure product, Hemopure, was authorized for use in South Africa in 2001, the government withdrew its approval in Oct. 2008.

The reason for this withdrawal, and the source of much trouble for the blood substitute industry lately, is a study published in the Journal of the American Medical Association, or JAMA, in May 2008.  The paper, referred to as a meta-analysis, examined data from previous studies and concluded that artificial blood products are unsafe and do more harm than good. The authors looked at results from 16 clinical trials and found that people who were given blood substitutes faced a 30 percent increased risk of death and a 2.7-fold increased risk of heart attack.

“Companies have gone to some length to try to reduce [artificial blood] toxicity, but our analysis shows that so far they haven’t succeeded,” says Dr. Peter Lurie, an author of the study and the deputy director of the health research group at Public Citizen, a nonprofit advocacy group based in Washington, D.C.

Even with these changes, however, the products still have side effects. In particular, they can cause high blood pressure, or hypertension, through a mechanism known as “nitric oxide scavenging,” according to John Olson, a biochemist at Rice University in Houston, Texas, who studies oxygen transport in the body. Hemoglobin molecules are small enough to fit inside blood vessel walls, where nitric oxide lies. Nitric oxide is essential for relaxing blood vessels and allowing blood to flow to the heart. If hemoglobin binds to nitric oxide, however, it can prevent this relaxation and cause hypertension. Biopure and Northfield Laboratories have tried to prevent this side effect by linking several hemoglobin proteins together, forming larger molecules that can’t get into blood vessel walls as easily. The current generation of HBOCs uses these linked hemoglobin molecules and causes less hypertension, says Olson.

While the JAMA study looked at clinical trials that used many different types of HBOCs, including the older substitutes that caused more hypertension, some argue that the analysis reveals a general toxicity that can be applied to all HBOCs.

“When you’re looking at harm, you want to show consistency across the products, and to me that was shown,” says Dean A. Fergusson, a clinical epidemiologist who specializes in transfusion medicine at the Ottawa Health Research Institute in Canada. “At the very least, it should raise concerns about doing another trial.”

Others, including those in the blood substitute industry, see a number of flaws in the JAMA paper. Biopure in particular has been quite vocal in its efforts to refute the study and recently sued the authors. One major flaw, company officials say, is that the study included clinical trials from a product called HemAssist, a blood substitute made by Illinois-based Baxter International Inc. in the 1990s. The HemAssist trials were abandoned after the product was linked to an unexpectedly high number of deaths.

“That trial carries so much weight in this meta-analysis that if you took it out, [the authors] would not have [statistical] significance in their final findings,” says Dr. A. Gerson Greenburg, vice president of medical affairs at Biopure. The HemAssist trial “was stopped for safety reasons, so to claim that no one knew about these issues or no one did anything about them is somewhat facetious,” he adds.

In the JAMA paper, the authors do show what would happen to their results if the HemAssist trial data is taken out. When the researchers removed this data, their estimate for the risk of death is essentially the same as before, but it loses statistical significance. This loss of significance is largely due to an increased margin of error that occurs when patient data is removed from the analysis:  fewer people in the study leads to greater uncertainty in the results and, in this case, makes the data less statistically significant. But their estimate of heart attack risk is still significant, says Dr. Lurie, the Public Citizen director. “The broad picture is that actually it doesn’t really matter if you remove [the] HemAssist [trial data].”

And while the HemAssist trials were indeed terminated much earlier than planned, most of the trial data were not compiled and published in medical journals until three to five years later. This type of secrecy, the authors of the JAMA paper say, prevents scientists from being able to properly assess the products and make advancements in their field.

“Basically, all the subsequent scientists are playing with a half-full deck because they aren’t fully apprised of what’s happened before,” says Dr. Lurie. If the results were published right away, he says, subsequent researchers might have decided to do their trials differently. “Perhaps some of the scientists, knowing [the HemAssist data], would have decided not to do the trials at all; perhaps they’d do the trial in some different way,” he says.

Biopure’s Greenburg feels that blood substitutes should be viewed as a way to provide temporary support during emergencies when natural blood is not available. “What I see the HBOC doing at the moment is serving as a bridge until red [blood] cells are available,” he says.

Olson, the biochemist at Rice University, agrees. “If I were bleeding to death and there was no whole blood to give me, I would take the Biopure product,” he says. “It would save my life.” Olson, who also researches ways to genetically engineer hemoglobin, is not a consultant for Biopure but has been paid to attend company meetings.

Many still feel that artificial blood development should proceed cautiously. Dr. Stephen Cohn, chief of surgery and a trauma specialist at the University of Texas Health Science Center at San Antonio, agrees that this product carries some risk. He feels that future clinical trials should be very selective about the patients they enroll, admitting only those patients who are in life-or-death situations.

“I think they’re going to have to be done in extremely high-risk patients,” Cohn says, “so that the benefit of having [artificial blood] is better than nothing.”

The Cord Blood Cure: an experimental procedure that can substitute for a bone marrow transplant.

Meta-analysis is useful in many places. But if studies of things that are too dis-similar are lump together, it can produce distorted results. For example a study of mother’s milk and a study of pig’s milk might be used together to conclude that milk causes indigestion problems in babies. Yet a meta-analysis of studies of different brands generic drugs with very much the same chemistry could produce very valid conclusions.

I am a R&D product development scientist, but not in the medical field…and not a profession statistician.

Perhaps Northfield Laboratories and Biopure Corp. should re-direct some of their resources into producing commercial quantities of O-neg. whole blood generated by haemopoietic Stem Cells.

Meta-analysis of things dis-similar is something of which to be cautious. Anybody see any comparison of the need for study (or meta-analysis) of artificial blood (with it’s use only in emergency circumstances when natural blood is not available) and the need for study (or meta-analysis) of the effects of artificial baby milk-infant formula. The World Health Organization recommends the use of artificial baby milk only in emergency circumstances, also, when human natural milk is not available. Any thoughts about why studies weren’t done before this artificial substance was allowed on human subjects (small vulnerable ones, at that) without proper analysis of its effects?