Will XO Laptops be Available in the US?

People want the $100 laptop, but the story of its commercialization keeps changing. 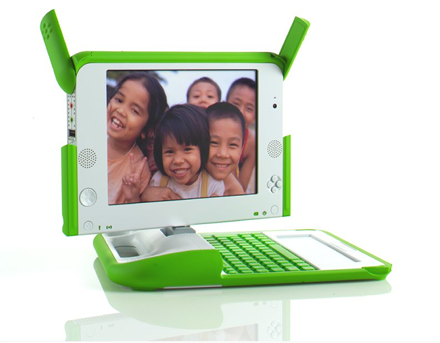 The XO laptop (often erringly referred to as the “$100 laptop”) is designed to bring computing to children in the developing world by utilizing innovative technology, and has created a media frenzy. Among its features are an innovative display that can utilize reflected sunlight and the ability to create wireless networks that share a single internet connection, all while keeping cost and power consumption to a minimum.

Americans should get a chance to buy the computers, despite recent claims to the contrary from One Laptop Per Child, the group behind the XO.

On January 10th, a BBC News article ran with the headline “Public can purchase $100 laptop,” where one of the project’s leaders described a plan to sell laptops to consumers above cost to fund additional units for children overseas, an idea that has been kicked around for a long time.

But by the next day, the headline and tone of the article had changed drastically, apparently when the author received a frantic phone call. On January 12, the OLPC issued a press release that stated that they had “no plans to commercialize the XO computer.”

So why did they change their tune?

When I inquired about the discrepancy, the OLPC’s public relations agency declined an interview and rephrased the press release, saying that “XO will be made available to governments in very large quantities to be given to all children free, as part of the education system. This is OLPC’s mission and sole focus right now.”

I find it hard to believe that commercialization plans have been completely abandoned- the OLPC admits, “many commercial ventures have been considered and proposed that may surface in 2008 or beyond.” For a venture to possibly surface in the next few years, it must be reasonably far along at this point. The project’s chief connectivity officer was quoted as saying “more than a third” of every board meeting is dedicated to exploring commercial sales of the laptops.

There’s no need for the OLPC to be so secretive and defensive about commercialization plans– selling the laptops in the US makes sense.

First, there’s the market demand. Just look at the OLPC’s wiki on the subject, which includes comments of people who can’t wait to buy the XO, even though many posts have been deleted.

Retiree Mike Liveright was one of many impressed by both the cause and technology of OLPC. He decided that he would willingly spend three times the cost of the laptop to get his hands on one while simultaneously funding two laptops for children overseas.

The idea of “buy two (or three), get one” has been proposed many times as an ethical way to get American consumers the laptop, and OLPC has considered the idea, according to their press releases. Liveright set up an online pledge that said, “I will purchase the $100 laptop at $300 but only if 100,000 other will do the same.” Without publicizing, Liveright’s pledge attracted 3,500 like-minded supporters.

“I think $300 for a laptop, even a very small laptop is not a bad price, and I think there are a lot of people who feel that way,” Liveright told me. “I established it to try to get MIT to think about something like this.”

Critics who jumped on the relatively low number of responses to the pledge missed the point. “If you only get ten thousand people, you still can give out ten thousand extra laptops,” said Liveright. “It shouldn’t be a major decision to make it happen.”

In addition, selling laptops to satisfy even a modest demand would solve the “grey market” problem. Many observers have suggested that recipients of an XO in developing nations could readily sell them for profit on eBay rather than use them for their intended purposes. By selling the laptops themselves, OLPC (who has mentioned eBay as a possible distributor) could fund additional laptops while keeping those already deployed in the hands they were intended for.

As a final benefit, greater access to the XO in the states would only strengthen and improve the open source software it runs, by giving more access to the digital community.

I can understand if the OLPC leaders aren’t ready to release the details of their commercialization plan yet, but I hope they’re still working on it. And until the laptops go on sale, they should do a better job of keeping their story straight.

We would entertain donating a certain percentage of our sales / profits for a special “OLPC” colored Aviator Laptop Stand, if we knew the children receiving these $100 laptops would be provided a healthy / ergonomic way to use them.

OLPC will not be in the USA for two reasons:

1. OLPC is (already) in the United States for the Linux developer community, please go to our website. We do not sell the machines. We give them to developers free.

2. In 2008, probably later in the year rather than sooner, we will do a “buy X and get 1” as a means of funding the poorest countries and children in the world.

3. OLPC has been very consistent about not commercializing the XO laptop. The report at CES was just inaccurate. We did not suddenly change our mind.

4. One reason not to launch OLPC in the USA is that the USA spends $8-10,000 per child per year in primary education. We are starting with countries that are closer to $200 per child per year, for whom the machine has been optimized: human power, sunlight readable display and mesh network. Note that $100 spead over five years is $20 per year or 10% (of the above).

5. OLPC recently created the OLPC Foundation, also at http://www.laptop.org, under the arrow (for “participate”). OLPCF will address the bottoms up aspect, after launch (keyword is “after”). Launch is expected late summer.

6. OLPC and the United Nations will issue an RFP is about 60 days from now, which will invite people, including those from developed countries, to help smaller and poor entities around the world in quantities of 10,000 and up.

Hello NN, what do you mean by the RFP with the UN in 60 days? 10,000, is that the amount of volunteers needed to help release the first 5-10 million laptops to the first countries?

Yeah I was in the press room at CES when the BBC journalist (the brown haired lady sitting opposite from me) overemphasized wrongly in her report about the commercialization aspect: link

Most of the communication problems has been created by the press (journalist who want to hear something different).

I have not heard of $8-$10000 being spent on each child in US schools. Where did you get your stats? I hope China makes a computer just like this one and offers it to underpaid Americans workers.

noww i wanaa buy the xo laptop and am in the middle east soo where can i buy it and if i wana buyy it online where to ??

OLPC, im sorry to say you appear to be thinking too slowly. Late 2008? you are going to loose the momentum of interest from developed world consumers, while someone else (Chinese/Indian firm?) develops something to fill the clear market gap.

Secondly, Why should developers in the developed world get them free? Agreed, they contribute by developing, but surely that adds to your costs as you hand out free laptops. (Burn some money anyone)

I need a laptop that is a durable as this, and you are the only guys to produce one at a price I can afford, as far as I am aware. I work in developing countries but end up wasting my income every couple of years when my second hand cheap laptops die from exposure to the elements. Frankly, my limited funds could be better spent helping others.

Hi, Im a student at Russell County High and Im vey interested in getting me one of these labtop; so I can finish High School.
How would I go about getting one contact me at Baby16holmes1990@yahoo.com.

Thanks for your time,
Ms.Holmes

There are many poor minority public school communities in the United States that claim to recieve a moderate budget per child but the children never see it. My young siblings currently experience public school situations where they are required to pay semester supply fees, book deposits, locker and desk usage fees, pay for extra curricular programs and still end up having to bring in their own supplies and many times toilet paper in addition to previously enforces supply fees. Public school officials miss-use funds more greatly than advertised. Those under privilaged communities deserve the same advantages, whether it be the U.S. or other areas of the world.

a store warrant as well. Upgrades should be part of the purchased package, and

many will also include discounted or free software suites. Another good item to

look for is an ergonomic laptop stand. Most are handy for travel, and it is

crucial to have one if the laptop will be used while lying in bed. These stands

allow the notebook to get enough air so as not to burn out the CPU. They also

ensure less stress on the hands and wrists of the user, and the back and neck as