The IPCC report says global warming is inevitable, but is there anything we can do? 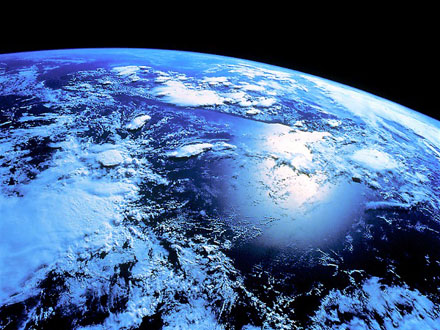 A view of Earth from space. [CREDIT: NASA]

February 2, 2007. On that day, “the question mark was removed behind the debate about whether climate change had anything to do with human activity on this planet.” So stated Achim Steiner, the Executive Director of the U.N.’s Environmental Programs, during the Paris press conference announcing the forth report from the International Panel of Climate Change (IPCC).

The more than 600 scientists who contributed to the report concur. “There is no question that the increase in greenhouse gases are dominated by human activity…The warming of the climate system is now unequivocal,” said Susan Solomon of the National Oceanic and Atmospheric Association.

Global warming occurs when gases in the atmosphere trap solar radiation above natural levels. Since the Industrial Revolution, human activity has increased the amount of greenhouse gases, namely carbon dioxide from burning fossil fuels and both nitrous oxide and methane from agricultural practices. The effect of increased atmospheric temperature has already been observed in rising sea levels, increased air and ocean temperatures, melting polar ice, and changes in rainfall amounts and intensity.

In a separate panel discussion about climate change and human health held at New York University earlier this week, Dale Jamieson, a professor of environment and ethics at NYU, emphasized that it is now critical to switch from seeing global warming as a scientific issue to accepting it as an ethical one, moving on to affect change. “It is difficult to act on climate change unless you see it as a moral issue and lift it out of a policy agenda,” he said.

To Jamieson, global warming is a moral issue because the problem is disproportionately created by the wealthy, saying that some people “act in such a way that it unjustifiably affects others.” Furthermore, the costs of climate change will not be as hard on those same wealthy nations or individuals. While the poor not only emit fewer greenhouse gases, they will bear the brunt of the consequences of global warming. This point is driven home by a map detailing the estimated numbers of world-wide deaths that could be attributed to global warming. Africans, the lowest emitters, will be affected most, according to Jonathan Patz of the University of Wisconsin-Madison.

So, what will happen? The IPCC report detailed many possible scenarios for the future but could not predict the most likely trajectory. “Warming will depend on choices that human beings will make to emit more or less greenhouse gases in the coming century,” said Solomon. We could choose a path that leads to an extreme, such as melting the Greenland ice sheet and raising sea level about 20 feet. Or we could choose a path that changes the world less drastically, requiring less adaptation and fewer environmental refugees.

At the end of the press conference, Steiner passionately concluded that “every individual can today walk out of their front door and cut their emissions by more than what Kyoto had envisioned… without having to lose the quality of their lives.” So, let’s do it. Unplug your sleeping computer, walk to the corner store, purchase veggies from a nearby farmer – whatever you do locally, the effect will be global. And the effect will be important.

i am a high school sophmore and i was given the speech topic of global warming for a contest. The more i read about this topic, the more interested i become, and i admit, i had my doubts. but i just wanted to say how much i could relate to your article for my speech and thanks for the information.

It is worse than you think:

Some microbes digest carbon in the ground, and emit methane. Some of that methane is trapped in ice called hydrate.

Unfortunately, mankind’s emissions is a much stronger trigger than past severe runaway global warming episodes, so the chain reaction will happen sooner, faster, and therefore will be much, much more severe.

Consensus is not now, nor has it ever been science.

…And the men who hold high places should forge the lead for our future… Koyoto Treaty is important. presidents should use a little preventative medecine and not let global warming be another Katrina. Scary thing is no one knows the real ramifications of global warming, only that our CO2 emmisions are incredibly higher than any natural CO2 emmisions that the world has seen in 600,000 years. Even during ice ages.