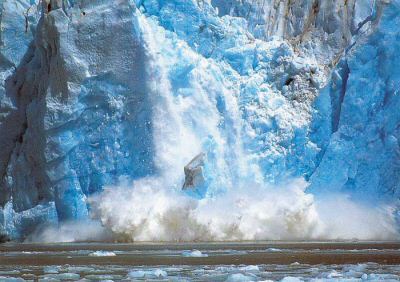 Something is missing from the estimates of future sea level rise in the recent report by the Intergovernmental Panel on Climate Change: the potentially catastrophic impact of a rapid melt of the Greenland and Antarctic ice sheets.

The IPCC asserts that melting by dynamic processes is too poorly understood to be included in scientific simulations, but many scientists disagree and believe that the report underestimates the threat that global warming will pose to coastal cities over the next century. Dynamic melting begins at the base of an ice sheet, where it meets the ground. As ice turns to water, the whole sheet can move as if part of a stream. Sea level could rise rapidly if dynamic melting pushes ice from land to ocean.

“The IPCC does not include dynamic processes where the ice flows rather than melts,” said Michael Oppenheimer, a geoscientist at Princeton University. “The bottom line is that the ice sheets are a big threat.” Oppenheimer estimates that the volume of water trapped in the Greenland ice sheet is equivalent to over twenty feet in sea level rise, and the western Antarctic ice sheet is equivalent to about fifteen feet.

The IPCC report estimates that sea level will increase between seven inches and two feet by the year 2100. Ice sheet flow was omitted from the report despite recent observations of the thinning of ice shelves and streams because some scientists are concerned that these are “transient effects,” not necessarily due to global warming, according to Jonathan Gregory. Gregory, a meteorologist at the University of Reading in England, is an author of the report who thinks sea level changes will be slow. “Sea level is more of a long-term issue,” he said. “The time scale for ice sheets to melt is centuries.”

Aside from dynamic melting, global warming largely raises sea level through two other processes: the gradual melting of ice sheets and the thermal expansion of the oceans because of increased temperature. Imagine the ocean as a big fishbowl- the volume of water would increase by both adding melt from ice initially stored outside the bowl and by heating the fishbowl itself.

According to Dean Roemmich, an expert on ocean currents at the Scripps Institute of Oceanography in California, one quarter of the inch-per-decade sea level rise over most of the 20th century is from thermal expansion and the remainder is due to gradual melting of ice. This combination of melting and expansion caused sea level to rise between an estimated six and nine inches over the course of the last century.

“When we talk about global warming, we are talking mostly of the oceans because the atmosphere has little capacity to hold heat,” explains Roemmich. He and other scientists estimate the oceans have absorbed more than eighty percent of the heat produced by human emissions.

One problem in projecting oceanic change is that no one is sure exactly how and where warmer temperatures will influence thermal expansion in the oceans. “Heat is not stored uniformly throughout the ocean,” explained University of Reading’s Gregory; the current models just aren’t good enough yet. An international group chaired by Roemmich has deployed about 3,000 flotation devices to collect data on the oceans, which Gregory said should help refine future models of sea level change.

But the ice sheets are “already frittering away at the edges, adding to sea level rise,” emphasized Princeton’s Oppenheimer. Glaciers are shrinking and ice shelves such as the Larsen B, a shelf about the size of Yosemite National Park, are falling into the seas, he says.

Ice movement was incorporated into the models of a study published this January in the journal Science by Stefan Rahmstorf of the Potsdam Institute for Climate Impact Research in Germany. His team projects a sea level rise between twenty inches and four and a half feet by the end of the 21st century. This is faster than the current IPCC predictions. Furthermore, a recent review by Rahmstorf and colleagues demonstrates that sea level rise has been following the upper limits of previous predictions – such as those from the 2001 IPCC report.

“What we are doing is irreversible,” warned Oppenheimer. “The last time the earth was as warm as it will get this century, the sea level was four to six meters [or 12 to 18 feet] higher.” That was 125,000 years ago. At that point in earth’s history, of course, there weren’t billions of human beings living on the earth’s coasts. Today, for example, an 18-foot increase in sea level would swamp the barrier islands south of Long Island and flood JFK International Airport.

Editor’s note: The last paragraph of this story has been changed to amend an error. Please see Dr. Oppenheimer’s comment below as well as Kristin Phillip’s comments for the original text.

Taking the Climate’s Temperature: How scientists measure the sensitivity of our climate.
—

There is in error in this otherwise interesting piece on ice sheets and sea level rise. The last time global average sea level was 4 to 6 meters higher was 125,000 years ago, not 125 million years ago. That’s long after the dinosaurs expired (about 65 million years ago). Global average temperature 125,000 years ago may not have been much different from what it is now but the Arctic was much warmer and central Anarctica was moderately warmer. Sea level was higher due to a reduction of ice in Greenland and perhaps Antarctica, but much of those ice sheets still remained. Still, we could return to such polar warmth within this century; at that point, it would be likley that sea level would begin to rise, perhaps rapidly compared to the recent past, eventually reaching 13 to 20 feet higher than today.

Thank you for catching my error — I appreciate the fact that you read this piece and that you corrected my conclusion.

The last paragraph of the article was altered to reflect Michael Oppenheimer’s comment. Oppenheimer used the date of 125,000 years ago in an interview, not 125 million years ago as the article initially stated. The error was mine. Given the changed date, the allusion to dinosaurs living at the time of this sea level was removed since dinosaurs were not still roaming the earth 125,000 years ago. All other text is original.

None of the articles I’ve read anywhere regarding the possible effects of a large ice melt mention whether the ice cores taken at the Antartic and Greenland show any gaps in the data meaning that those particular areas have at some point partially remelted.
Would the absence of any gaps, thus indicating a continous uniterrupted buildup of ice through the warming cooling cycles, indicate that each warming cycle was trending to a lower peak than the previous one? Missing ice could indicate that each peak was increasing.

I’ve just read your article and found it very interesting but also frightening.I have seen documentaries about greenhouse gasses,methane?,which is frozen at the bottom of the sea and locked up in permafrost,results from the ice-core drilling that show rapid change in the environment, the drastic reduction of ice in the Arctic and ice sheets breaking up etc and read articles such as yours. The thing i worry about is all these studies seem to be seperate from each other, as your article says ‘something is missing’.Why? I am not a scientist but all these changes put together seem to be having a ‘snowball’ effect and the predictions on time/effect are not taking this into account.