Why it’s still hard to get cell-phone reception in the urban jungle. 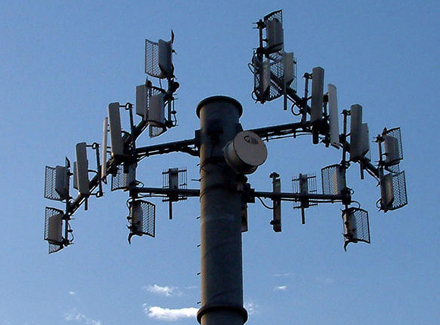 We’re used to garbled voices. As we make more calls on cellular phones, phrases like “can you hear me now?”, “sorry, what did you say?”, and “are you still there?” wedge themselves into more of our conversations. The convenience of cell phones makes them a popular alternative to home phones, but often at the price of voice quality.

Engineers from each of the major wireless providers quickly point out that outdoor reception in the city is generally excellent. This revelation provides little consolation, however, since many of us spend most of our day indoors working or at home – the places we want our cell phones to work the most.

The problem with using a cell phone indoors is that the signals coming from an antenna a few blocks away have to travel through various building materials before they reach your phone. Verizon’s Haberman said that building materials alone can cause between 10 and 30 dBm of signal loss–the equivalent of 90 to 99.9% of the originial signal, or up to four bars of reception, depending on the phone.

Concrete or brick walls are the biggest culprit. “It’s really the structure itself- thick concrete is just hard to penetrate,” said Steven Rice, regional vice president of engineering and network operations for Alltel Wireless. The concrete absorbs the power of the radio waves as a lampshade absorbs light- the thicker the shade, the dimmer the light.

If the walls are the problem, can’t we just turn up the power of the cell-phone towers? More power in the first place could make the lost signal insignificant. If radio stations want more listeners, they can broadcast at higher and higher power. But a successful cell phone network actually relies on minimizing power.

“In our environment, more power is not always a good thing,” said Rice. While radio only goes one-way, from the tower to your stereo, cell phone towers and phones both send and receive one-half of the conversation.

“We run much lower power because we have to hear back from the mobile,” explained Cingular’s Fleissner. “The phone needs to be able to pick out the signal from our cell site.” Yelling may be a good way to get someone’s attention on the other side of a room, but it’s difficult to hear someone whispering at the same time.

So instead, both towers and phones constantly adjust their broadcast power so they use just enough to keep a connection without interfering with other calls, That’s why the number of bars indicating signal-strength can vary while you stand in one spot. Your phone tries to keep its power on the sweet spot.

Other factors also contribute to indoor cell phone coverage. The amount of signal lost through a wall also depends on its frequency. Cellular signals are legally restricted to two segments of the radio spectrum: 50 MHz ranges near 800 and 1900 MHz. Just as walls can’t stop the low frequency sound waves of a neighbor’s thumping bass, low frequency radio waves make it farther through concrete. All things equal, signals in the 800 MHz band are more likely to make it into your apartment building or office than those near 1900 MHz.

If you’re curious, you can go here to find out which frequencies the carriers in your area use.

Areas near windows often provide hope for the signal-starved. While glass windows don’t absorb radio waves like concrete, they still cause problems. Windows can reflect signals back to their source, further hampering reception. Making matters worse, older skyscrapers often have windows that are tinted or mirrored with metal, which make them even more reflective. In these buildings, “you may lose a good chunk of the power,” according to Fleissner.

When these large skyscrapers or businesses have a problem with reception, they often have special systems installed for an individual building. “I get almost two requests per day for in-building systems,” said Verizon Wireless’ Haberman.

While similar systems for homes are available, their price tag often makes them cost prohibitive. As consumers expect more and more from their wireless phones, network engineers are under greater pressure to ensure coverage everywhere and at all times. Until they conquer the great indoors, cell phones will remain frustrating for many of us. At least we have lots of company.

What an awesome way to explain thisnow I know eeyvrthing!