The Russian polonium case reminds us how fascinating poison stories can be. 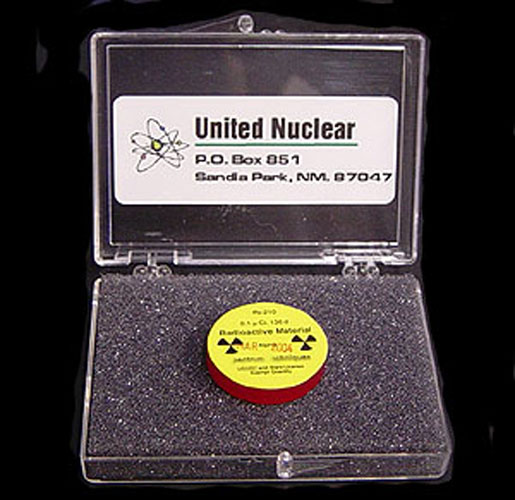 So, I’ve been wanting to write about the Russian polonium poisoning story for a while. Of course, it’s already received a lot of attention from media outlets like the BBC, CNN, and others.

I mean, it’s got the political intrigue and quirkiness (death by poisoning? and then the choice of poison is polonium? John La Carre couldn’t have come up with better) of a great spy novel–what journalist could resist? Still, now that British officials have charged a suspect with the Litvinenko poisoning, I found myself motivated to try writing about it again.

As a science enthusiast, I’m drawn more to the method of murder rather than the motivations for it. Former KGB agent, Alexander Litvinenko, was killed, by all accounts, from drinking tea laced with the radioactive element polonium. While people may have died from polonium poisoning accidentally before–it’s highly toxic if ingested and I suppose it’s possible for someone working with the element to accidentally poison themselves–this is the first report I’ve heard of polonium being used as a murder weapon.

Polonium was discovered by Polish-turned-French chemist, Marie Curie, who named the element after her homeland. It’s very toxic and very rare; uranium and radium, also radioactive, are far more common. Polonium-210, the isotope used to poison Litvinenko, emits alpha particles, which wreak havoc on human tissue. Polonium’s alpha particles don’t travel far, though, which means it has to be ingested to cause cellular damage. Experts believe Litvinenko ingested more than enough to cause the acute radiation sickness that killed him.

Something about poisoning seems almost quaint even though death by poison–be it arsenic, radiation, mercury, whatever–is unquestionably an agonizing way to go. Maybe it’s the passivity of the method that appeals. There’s no blood, no mess. I immediately think of the poison-in-the-ear scene from Hamlet–gruesome, yet elegant, and so sneaky. It seems a more sophisticated, clever way to kill, if a bit indirect. Last year chemist and science writer John Emsley wrote a whole book about the science of poisoning. It’s called The Elements of Murder: A History of Poison. I haven’t read it yet, but I’m starting to think it might make a great addition to my summer reading list.

Also somewhat recently there was the attempted dioxin poisoning (well successful poisoning, unsuccessful murder) of Ukrainian opposition presidential candidate Viktor Yushchenko. You know, while discussing ugly poisonings in the sphere of Russia and all.

And actually dioxin seems a much smarter choice than radioactive isotopes which can apparently be traced back to their source more easily; though I guess if one needs guaranteed results dioxin isn’t the way to go…

Right, I forgot about the Yushchenko dioxin case. I believe he ingested something like 1000 times the tolerable dose, but it resulted in more cosmetic damage (his face turned ashen and pock-marked) than anything. Slate actually did an Explainer on it, cruelly titled “Yushchenko’s Extreme Makeover.”
http://www.slate.com/id/2110979/

I agree dioxin does make for a sneakier poison, since it’s hard to trace and can take up to a year before the unlucky target starts to show symptoms. But as a murder weapon, it seems like it falls a little short. Maybe better for making enemies ugly, which in some political races could be considered akin to death.