Gridlock on the Grid

As the national power grid ages, we become more vulnerable to blackouts. 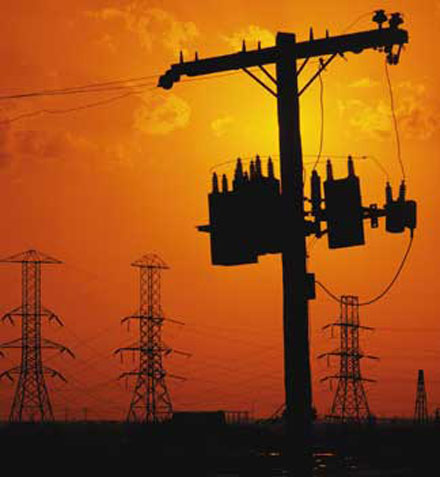 When a massive blackout struck the Northeastern United States in August 2003, New Yorkers spilled into the streets of their crippled city and merged into a swarm of foot traffic heading home. It could have been a scene from the beginning of an apocalyptic movie, except that most of the city’s electricity was back by the next morning.

Now, more than three years later, experts are warning that a much scarier sequel could be in the works. They say the nation’s transmission grid remains vulnerable to congestion and outages, a view echoed last fall in a private industry report by Fitch Ratings, an international credit rating agency. And that could even lead to another massive blackout.

“We might be closer to one than anyone might imagine,” said George Gross, a professor of electrical and computer engineering at the University of Illinois’ Institute of Government and Public Affairs. He described large power outages as a “manifestation of the problems” caused by the aging grid.

The transmission grid, our national network of power lines that carry electricity from power plants to homes and businesses, was built largely in the 1960s and 1970s. Now, the grid is becoming overloaded as utility companies build new power plants without adding new transmission lines. At the same time, federal agencies and utility companies share Gross’s worries about the health of the grid.

The grid suffers from “aging infrastructure, significant underinvestment, and technology that was developed in the 1950s or earlier,” according to the Fitch Ratings report. Based on Department of Energy statistics, the report noted that 70 percent of the transmission lines in the grid are 25 years or older.

The city of New York is full of underground cables, and “some of those cables are over 50 years old,” said Peter Sauer, the Grainger Chair in Electrical and Computer Engineering at the University of Illinois and a colleague of Gross.

“The transmission system was designed to be operated under a regulatory system,” that mostly no longer exists, Sauer said. At the time the grid was built, power companies held regional monopolies and knew the level of energy demand in their areas, so they were able to build transmission lines to meet the local electricity load.

The situation changed in the 1990s when some states decided to go into “deregulated” or “restructured” electricity markets. The innovations led to companies selling electricity to other power companies or businesses across much larger geographical distances, which increased strain on the grid.

Under the old system, “the transfer of power from one company to another was mainly for emergencies,” said Sauer. “Now they’re pushing [the grid] to the limit wherever they can.”

Another source of increased stress on the grid has been the doubling of both energy demand and electricity generation over the past 30 years, which has placed a heavier load on the existing power lines.

The aging transmission grid resembles an old and poorly maintained highway filled with an increasing number of cars that are traveling longer distances to reach their destinations. “We have probably three times as many cars on the road today, but the highway system is basically the same as 30 or 40 years ago,” said Gross. As a result, the system becomes less reliable.

That decline in reliability can increase the chance of outages like the Northeast Blackout of 2003, which affected up to 50 million people in eight U.S. states and portions of Canada and cost the U.S. economy an estimated $10 billion.

When one part of the congested grid overloads and shuts down to avoid equipment damage, the other parts of the grid have to bear an even greater load of electricity, Gross explained. He compared it to closing down one lane of the highway, which causes cars to crowd into other highway lanes.

“When it’s sufficiently stressed and strained, then there’s nothing else you can do,” said Gross. “Overloading goes into other lines, it’s exactly like a line of dominoes.”

That happened in 2003 when a power station malfunction on Lake Erie led to a cascading effect on power lines from Ohio to New York and Canada.

To prevent this, the grid needs extra circuits to take up the load in emergency situations – not unlike having an extra highway lane available just in case it’s needed.“Transmission systems and reliability can be dependent on a circuit that is delivering no power,” said Jack Casazza, a former power company executive and president of the American Education Institute, which helps train power industry workers.

While new transmission lines are necessary, power companies would rather build power plants because they are considered safer bets to be profitable, according to Gross.

“The rate of return [for building transmission lines] is usually good, but it is not as good as what people could do by taking the same pot of money and putting it into generation,” said Gross. With generation, he added, “the risks are better understood and the rate of return is faster.”

That’s a key reason why, from 1975 to 1999, “transmission capital investment declined year over year,” according to Karen Anderson, director of the Fitch Ratings Global Power team and lead author on the transmission grid report.

She said that transmission investment only began increasing in the last few years, as power companies began building smaller lines that help “band-aid” the most congested spots on the grid, particularly in a Northeast corridor ranging from Washington, D.C. to New York.

However, some experts remain skeptical that these new transmission investments will solve the problem. Casazza in particular thinks that the Department of Energy focuses too much on investments aimed at lowering power prices, rather than reducing the possibility of outages.

“DOE, unfortunately, focuses on these economic constraints… a great many circuits built from the DOE approach will not be needed in the future,” said Casazza. He emphasized that building new transmission lines to meet market demand for sending power between points A and B is a different goal than building transmission lines to ensure overall reliability for the grid. The current system of trading and bidding on power contracts by different power companies drives down prices and determines the market demand for new lines.

A DOE manager countered that the agency is merely following its congressional mandate to identify primary sources of congestion on the grid.

“The focus is not necessarily on maintaining reliability only,” said Poonum Agrawal, manager at the DOE Office of Electricity Delivery and Energy Reliability. She added, however, that reliability is “an important component” in maintaining the overall grid.

Real-time monitoring would allow grid operators to distribute power more efficiently, as well as watch for trouble spots involving congestion and overloading. The Department of Energy and university researchers are working on developing such technology, but there is still no national system in place.

Whatever new solutions are implemented, they will have to handle the demands of the current restructured electricity markets while ensuring a reliable grid.

“Everything does boil down to economics, but the economics are always done under constraint conditions. Reliability puts in a severe constraint,” cautioned Gross. “If we don’t observe those constraints, we run into trouble.”

Editor’s Note: This story was first published on February 9, 2007. It was selected to appear here by our editorial staff while we are away.

The article could be improved by commenting on whether or not the creation of new federally mandated rules (a product of the 2003 blackout) for reliability are expected to have any impact on improving the the quality of service or avoiding future blackouts.

This is a good article, and I agree with your intent, but you incorrectly using the term “real-time monitoring system”. The terms you should be using are “real-time state estimation and real-time contingency analysis”.

There are two types of real time monitoring. One of them means knowing the electrical status of the system more accurately and the second one knowing the real-time (dynamic) thermal ratings of the lines. The latter technology is already being applied At a number of utilities.