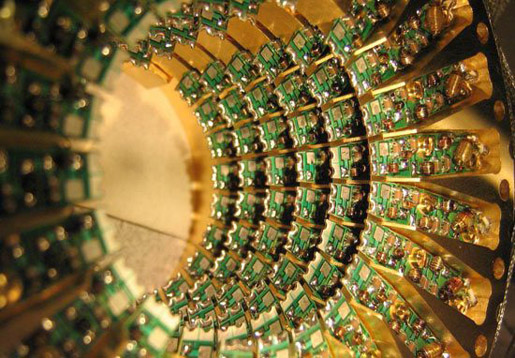 The processor of the purported quantum computer that D-Wave created. [Credit: D-Wave Systems]

Gregoire de Loubens holds his breath as he peers through a microscope looking for the ideal magnetic nickel crystal. One at a time, he examines the green pyramids under the lens.

De Loubens, a post-doctoral fellow in Andrew Kent’s New York University physics lab, is trying to understand how these miniscule magnets function. His experiments, and others like them, may also help physicists develop new technology: quantum computers capable of solving complicated computational problems, sensing security breaches and cracking codes, among other things.

Quantum computers, the Holy Grail for many physicists and computer scientists (not to mention intelligence agencies and financial institutions), could theoretically perform tasks more complicated than those done by the computers people use today—and at a blistering rate. But how these computers will be made (and how long this might take) is still relatively uncertain.

“If you could solve the factoring problem, you could break most of the cryptography used in the world today,” says Scott Aaronson, a post-doctoral fellow at the University of Waterloo’s Institute for Quantum Computing.

Quantum mechanics describes probabilities rather than finite descriptions of physical phenomena. Whereas in chemistry, an atom’s electrons are often depicted in distinct rings, in quantum mechanics an electron “is nowhere,” says Gabriel Chaves, a third year graduate student in the Kent lab. Instead it has “a probability of being in a particular point.”

In contrast, quantum computers are built on quantum qubits (pronounced “cubits”). Like a dimmer light switch that creates a romantic glow or a riot of illumination, qubits exist in numerous states between “on” and “off,” or even a combination of “on” and “off.” Therefore, each qubit should be able to simultaneously come up with a wide array of potential answers to a given problem in parallel, and a string of cubits should accomplish more than the same number of classical bits.

Kent’s lab is curious about the qubit-potential of single molecule magnets. Far from fridge magnets, to the eye the magnetic nickel crystals look like green sand grains suspended in slurry. These molecular magnets adopt physical states with quantum properties, making them qubit candidates.

The idea of storing information in a material’s physical state is not new. An old-style computer disk, for example, stores data by exploiting magnetic fields. Depending on whether the magnetic field points up or down, the disk encodes different information.

Lying across a counter at the back of the lab is the cryostat that de Loubens uses to cool one nickel crystal at a time, to unimaginably low temperatures (nearly -460 degrees Fahrenheit). De Loubens uses the cryostat because he does not want the crystal to absorb energy–including heat energy–during his experiments. Once his experiment is running, the post-doc applies external energy using microwave photons, before using a sensor to measure and analyze the dynamics of how the energy influences the crystal.

He chooses the smallest possible crystal so that applied energy will spread over it evenly. Using a modified Q-tip with one wooden end sharpened to a point, he fishes through green crystals, transferring candidates barely visible to the human eye under the microscope for closer inspection. De Loubens scrutinizes them for a small, symmetrical pyramid-shaped crystal.

“Perhaps I will work with this guy,” he says, examining one under the microscope. De Loubens fiddles with the crystal. It breaks. Again and again, he examines crystals that don’t make the cut. Finally he finds one, aligns it on the strip and takes a digital photograph of the magnified crystal sparkling like an emerald on a gold band. After meticulously closing, sealing and double-checking the cryostat, de Loubens lowers it vertically into the floor where it cools overnight in liquid helium.

Such experiments can take months to plan and last for days or weeks. Nevertheless, the pace of preliminary experiments belie the broader race to develop–or discredit–quantum computing. In the defense community, some people would “love to prove that quantum computing is impossible,” Kent explains, if only so they can stop worrying about it. On the other hand, if someone is going to build a quantum computer, everyone is clamoring to be first. The only problem is no one seems to know how close the technology really is.

Physicists and computer scientists have been trying to develop quantum computers for over twenty years, with limited success. In February, a Canadian company called D-Wave, announced that it had done the extraordinary: Created a quantum computer with 16 qubits, a new record for the number of qubits in one system. In a demonstration, the D-Wave computer solved complex computational problems using quantum technology, according to a February 13th press release. Many are skeptical.

“It is almost unanimously considered in the community to be pure marketing hype,” says Aaronson, “the evidence just isn’t there.”

D-Wave’s qubits are composed of a material called niobium, which becomes a superconductor, a quantum system, at very low temperatures, according to Jeremy Hilton, D-Wave’s vice president of hardware development and engineering. Critics argue that D-Wave has a dearth of sufficient data about how the computer works as a complete system. Until the information is published and thoroughly tested, this skepticism will likely remain.

“Skepticism would be a natural response,” D-Wave’s Hilton says. But he insists that even if the technology is different from what most theorists imagined, it does exhibit quantum properties. He says the company is being transparent about its findings. “Quantum computers are not 10 or 20 years away,” he says, “that has tended to shock quite a few people.”

D-Wave’s claimed success has not changed the careful but steady pace of research in the Kent lab. Loubens continues intensely analyzing data. On his computer monitor, graphs represent the information gleaned from the crystal. De Loubens suspects his molecular magnets may ping-pong between states too quickly to accurately encode information. Still, while the experiments may not lead to a quantum computer, they will likely help physicists understand the quantum behavior of these molecular magnets, something that may have potential benefits no one has dreamed up just yet.

If you have infinite memory just two qubits and infinite time would be enough to run a universe.

I believe a blackhole could provide infinite space and time.

the 9th gate is almost here!!!…
From western state hospital I say
I am insane and I will not change
sincerely,
Daniel Hazelton Waters

Hello/Goodbye World…
This simple program is enough to change the course of history. In chaos theory even just lokking at something would be enough to change it’s entire existence.
This stuff i am typing here will likely haunt me forever. I want to have a conversation with the entire world at a collective point of knowledge and awareness.
Nexus Knowledge & Synthia

Hello again I am still thinking about ways to make my life better. Im in the mood for good things. Even though so far I have only been having a conversation with myself I am living in a house and not a hospital. the last two comments are mine also. I have a nice laptop and all I am missing is deep emotions some where I lost them along many missteps and wrong turns. I know I can come back and do some good now I want to see machine learning get to the point where I can explain some ideas and get input back. quantumcatch@gmail.com sincerely Daniel Hazelton Waters

I have emotions like crazy now. We are just a few short years (3-5 likely) away from a revolution that will quantum leap Moore’s law into a new age. It’s not a quantum computer but it is very power full. It’s called a memristor.