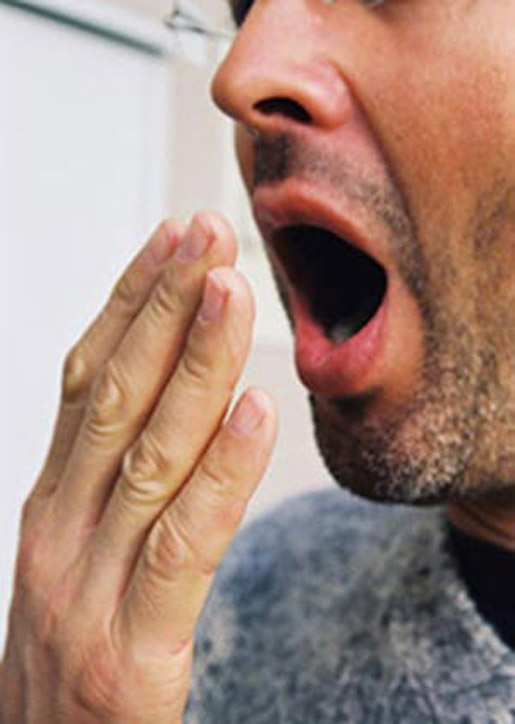 Several years ago in a faraway land, I took a memorable psychology class from a professor whose interest in the field seemed to be motivated, at least in part, by a desire to unearth new tricks for beguiling the opposite sex. Ethical implications aside, his lectures were generously garnished with anecdotes that held his wide-eyed freshmen audience in rapt attention.

Among the tips he shared was a psychologically based method for casually gauging just who might be checking you out in a crowded place: yawning. The theory goes that if you yawn, anyone who’s surreptitiously watching you won’t be able to resist yawning too, giving themselves away (and marking them as a susceptible target for wooing).

The trick is based on a real phenomenon called “contagious yawning,” in which seeing, hearing, or even thinking about someone else yawning causes you to follow suit. The biological function of yawning is debatable and there are several kinds of yawns that may signal everything from fatigue to aggression. But contagiously opening your yapper in a yawn seems to be distinct from doing so spontaneously, based on the fact that the former does not occur in all animals. In other words, plenty of animals yawn, but not all animals mimic one another’s yawns.

Whether or not seeing someone else’s jaws gaping wide gives you the uncontrollable urge to join in may say more about your personality than you realize. Roughly half of people yawn when watching videos of others yawning. Some researchers hypothesize that contagious yawning is more common in people with greater empathy — the ability to recognize and share other people’s emotions — an idea that has gotten quite a bit of press lately.

Indeed, studies of what’s actually happening in the brain when we see others yawn also seem to support the empathy explanation. For example, in 2005, researchers used an imaging technique called fMRI to see what happens in the brain when people see others yawn. The images showed that in the person seeing the yawn, there was increased activity in the part of the brain involved in self-processing, a region believed to be related to empathy.

Contagious yawning is not a strictly human habit, though. Research shows that a couple animals related to our species, like chimps, do it too. In one study, British and Japanese researchers showed six female chimps videos of other female chimps that were either yawning or just opening their mouths. A third of the chimps yawned significantly more when watching other chimps yawn, while none of them yawned when watching the non-yawns.

So, yes, it seems that my professor was on to something with his yawning scheme. Not only does research show that yawning is contagious, it suggests yawning weeds out the starers who are a bit less empathetic (too bad the yawning trick won’t weed out the chimps, too).

Of course, if it’s a boring lecture you may just find that everyone else is yawning. But, more worryingly, what if someone is playing this mind game on you and you yawn at just the wrong time? You could end up being “wooed” unwittingly yourself”

check out worldscience.net
i spell wrong on purpose

Jo-Bob, you need to go back and read worldscience.net’s report. It specifically states it has nothing to do with mirror neurons.

Specifically stated, “Mirror neurons typically become active when a person consciously imitates an action of someone else, a process associated with learning. But they seem to play no role in yawn contagiousness.”

You have to read after the BUT part. They offer theories on it but have no conclusive answer.

this was boring. ahha.
but it helped with my science porject.
:]

im never yawning again!!!! i do everything i can 2 keep from b-ing “wooed” & yet im always the girl w/ the stalker… if yawning=wooing target count me out!! x__x aye chihuahua!

I always wondered why I yawned when someone else yawned. I am amiable. Strangely though, I have been made to yawn without seeing or hearing the other person. It’s some other force that can’t be explained. To common to be coincidence. Try it. Yawn while staring at someone that does’nt see you. they will yawn too. I’m yawning right now. You will kyawn while reading this. 1am , good night.

Did the videos have sound? Was there a test of just the sounds but no images? The presence of both may have implications but I do remember someone saying that he was asking “who’s yawing in the back seat because it’s making me yawn?”

one of my lecturers says that we probably yawn so that we recirculate the fliuds in hte thoracic cavity which apparently sink (gravity)..so when you’ve been stationary for too long sitting or standing ..you yawn

but it helped with my science project![:

I yawn when I get out to the table for breakfast, and my Mommy says “hi Squarehead”,every morning.

i didnt know it was because of all of this!!!

i yaw everyday..
i didnt know it was beacuse of this!!

This article was the perfect resource I needed to piece together a research paper on contagious yawning. Thanks guys

WELL…I KNOW I YARN TOO, EVEN WHEN I SEE THE WORD…YEA I MUST HAVE IT REALLY BAD.:-D I WONDER THOUGH…COULD THIS BE TRIGGERED BY THE LACK OF REST PEOPLE GET, I GET, LOL, BUT SERIOUSLY THOUGH…WITH, SEEMS LIKE, EVERYBODY IS ON THE GO OR REALLY BUSY, BEING BURNED OUT, LEAVES US VULNERABLE TO THINGS SUCH AS YARNING WHEN WE SEE OTHERS YARN? JUST WANTED TO KNOW

im a but hole and i yawn a lot

I yawned 3 times reading this. Make that 4.

here is a sweet video explaing yawning. it looks at brain fuction to explain why the are contagious

I litterally yawned 5 times reading this

MythBusters had no conclusive evidence that yawning were contagious: http://mythbustersresults.com/episode28

i yawned 4 times reading this

I just couldn’t help myself, as much as I was aware that the article was making me want to yawn, I couldn’t stop!

YAWNING IS SOO CONTAGIOUS… watch me yawn once and see if u dont….!!! lol

Guess what? I didn’t yawn even once while reading every word of this article. even staring at the man in the picture yawning couldnt make me yawn. I am thinking of yawning from morning. but i still can’t yawn. I have a big belly and I have been eating every day full stomach and I am super relaxed and bored. I don’t suffer from autism and yes you have my empathy guys.

there is more research to be done.
I still haven’t yawned and I am bored with this article and the comments. even writing this boring comment didn’t make me yawn.

and no even after writing and reading my comment again i didn’t YAWN!!