Can one drug treat both HIV and malaria? 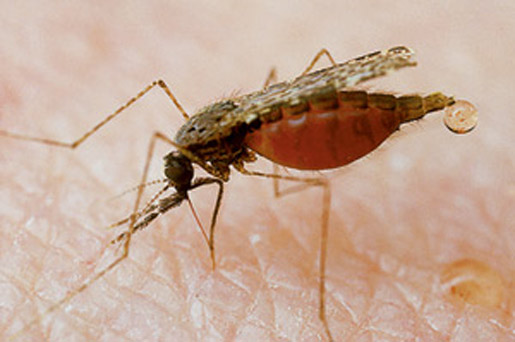 A mosquito fills up with blood as it feasts on human flesh. [CREDIT: Darlene A. Murawski/ Peter Arnold]

A fogged-up window marked ‘biohazard’ lends a glimpse into the buzzing nursery. Behind it harbors one of the world’s most deadly insects–one that’s responsible for more deaths than all the wars in history combined. It is also Jean Nonon’s office – a mosquito insectory at NYU’s parasitology lab.

Every week the technician raises and nurtures about 20,000 mosquitoes for experiments. Nonon swifly grabs two trays of water teeming with hundreds of black larvae and pupae paddling in every direction. With a suction tool and a well trained eye he whisks only the pupae into a petri dish inside a netted container. In three days the pupae will leave the water as mosquitoes.

These insects are bred to test new anti-malaria strategies that include using an AIDS drug as a new line of defense. If the therapy proves effective, it could broadly impact the treatment of AIDS and malaria across sub-Saharan Africa where both diseases are endemic.

The NYU researchers, led by Photini Sinnis, want to understand what happens during what is known as the “liver stage”–one of the least understood aspects of malaria infection. The malaria parasite, or sporozoite, travels to the liver and develops into merozoites in order to attack and invade red blood cells. “We don’t know why they only develop in the liver,” said Sinnis. In addition, proteases, or enzymes that clip a protein like a scissor, are important in the invasion of the malaria parasite into the liver, said Charlotte Hobbs, a key member of Sinnis’ team. She and the other lab members hope that the protease inhibitors used in HIV treatments might also be used to fight malaria.

Malaria is a mosquito-borne disease that infects 300-500 million people each year and kills over a million at the same rate, according to the Centers for Disease Control and Prevention. Meanwhile, co-infection of HIV and malaria account for about 4 million deaths per year, most of which occur in sub-Saharan Africa, according to the World Health Organization.

HIV and Malaria may actually fuel each other’s symptoms, though researchers aren’t yet sure how. In a 2006 study published in Science, AIDS researcher James Kublin showed that HIV amplifies malaria infection by lowering the number of immune cells that fight disease. “We don’t know if malaria makes people more susceptible to HIV, but people with both diseases have higher levels of HIV [in their body],” said Kublin, who conducts his research at the Fred Hutchison Cancer Research Center in Seattle.

In 2005, researchers at the University of California at San Francisco found that protease inhibitors that inhibit the HIV virus also reduce the severity of malaria in humans. “This is totally unexpected and unforeseeable,” said William Borkowsky, director of NYU’s Saul Krugman Division of Infectious Diseases and Immunology. “It didn’t make sense…the mechanisms were not clear.”

Using mice as models, Hobbs and Sinnis have been trying to figure out why. Hobbs injects malaria parasites into mice along with varying doses of the protease inhibitors to see if they still get malaria. ”Looking at the animal data it’s very convincing that an effect on malaria is being detected,” said Kublin, who saw Hobbs present her research earlier this year.

If indeed they find that protease inhibitors are consistently effective against malaria, the goal will be to distribute them to regions with high co-infection rates like sub-Saharan Africa. “If you can kill two birds with one stone, why not?” asked Hobbs, who is a pediatrician in addition to her role as a malaria researcher.

Currently NNRTIs, or non-nucleoside reverse transcriptase inhibitors, are the first-line HIV treatments in sub-Saharan Africa. They prevent the virus from replicating and infecting healthy immune cells by blocking an enzyme that helps HIV convert its genetic information into DNA. The NNRTIs are cheaper and have fewer side effects than protease inhibitors, the second-line HIV treatment there. But if the two-in-one HIV/malaria treatment is proven effective, said Borkowsky, the situation could change. Drug companies could then be motivated to produce generic forms of protease inhibitors, making them a more affordable treatment.

Some HIV experts are opposed to replacing NNRTIs with protease inhibitors in Africa, saying it would leave them without any back-up treatments. “It would limit options in HIV management” argued Louise Kuhn, assistant professor and HIV researcher at Columbia University. “We can’t move backwards.”

Despite the controversy surrounding her research, Borkowsky said senior investigators were “blown away” when Hobbs presented her preliminary results at a recent meeting. “Hobbs’ results are very compelling and require further study,” said Kublin.

Hobbs expects to publish her results later this year. In the meantime, she continues injecting her mice with a drug that may one day be promoted from back-up to being the go-to option in fighting two diseases that plague Africa. “No one thinks we can eradicate both diseases,” she said, “but with a combination of efforts we can successfully treat a lot of people.”