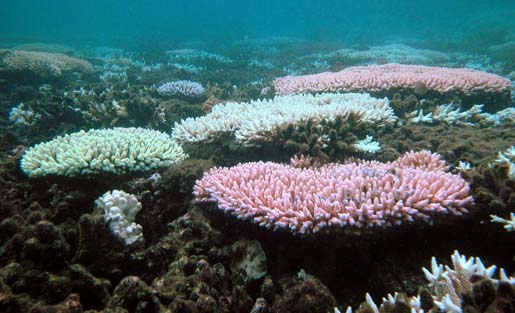 As summer approaches in the southern hemisphere, people may be concerned about getting a tan. But one of Australia’s most famous residents faces exactly the opposite fate–-bleaching.

White coral is the sign of an unhealthy reef, and as temperatures get warmer than normal, the frequency and intensity of bleaching events increases. As a result, the Great Barrier Reef in Australia and other reefs around the globe are expected to face significant loss in species diversity as the coral and the animals that thrive on it, like trout and perch, die off by the year 2020, according to the Fourth Assessment Report released by the Nobel Prize-winning Intergovernmental Panel on Climate Change this April.

While many of the report’s predictions focus on the end of the century, the scientists who authored the report expect to see significant effects on the Great Barrier in little more than a decade. This is hardly the first warning for the natural wonder—a report commissioned by the World Wildlife Fund in 2004 predicted that 95 percent of the Great Barrier Reef could be lost as a result of bleaching by 2050.

Coral live in colonies as polyps, with many identical polyps living together to form a reef. These polyps share a symbiotic relationship with unicellular algae — microscopic organisms that use photosynthesis to create organic matter. When a coral dies, its skeleton is incorporated into the framework of the reef, and these algae continue to produce nutrients for the local fish. But if anything causes stress on this symbiotic environment, the reef cannot sustain the same amount of marine life. As the creation of organic matter begins to decline, so does the level of photosynthetic pigments, causing the coral to lose its dramatic color and become whitish.

“[Coral bleaching] has been happening at a global scale for more than twenty years,” said Terence Hughes, director of the ARC Centre of Excellence for Coral Reef Studies in Australia and one of the contributing authors to the report. According to Hughes, eight bleaching events have occurred since 1979, becoming more frequent and affecting a wider area of coral. For example, in 1998, 42 percent of the Great Barrier Reef experienced some form of bleaching, but in 2002, bleaching affected 54 percent of the reef.

Anything that puts stress on the coral can cause bleaching, but according to Hughes, three factors produce the most: pollution caused by coastal development, over-harvesting of fish and other aquatic creatures for food, and global warming. Because global warming is just one contributor, assessing its impact requires careful study. However, the bleaching that has been observed in less accessible coral reefs shows that they are less affected by development and overfishing than the Great Barrier Reef.

“Even the most remote reefs still have climate change impact,” said Hughes. The 2004 World Wildlife Fund study concluded that 20 percent of the world’s coral had been bleached beyond recovery, and in Jamaica, on the other side of the globe, 95 percent of the reefs have disappeared.

Of the three factors that contribute to bleaching, Hughes said that global warming has the most impact, although the numbers depend on assumptions about ocean warming. The IPCC’s predictions are based on the predicted change in temperature over the next few decades, and while the scientific community disputes exactly how much the temperature of the Earth and its oceans could rise, marine biologists know how any kind of temperature change can affect coral and the species that live around it.

“It is extremely hard to identify the direct influence of temperature on coral reefs,” said Cynthia Rosenzweig, coordinating lead author of the IPCC’s Working Group II.

“These organisms seem to be extraordinarily sensitive,” said Chris Langdon, associate professor of marine biology and fisheries at the University of Miami. “It’s something that’s really easy to slip under the radar and people forget to notice.”

The other reason it’s hard to detect is that coral are able to recover after large bleaching events. Langdon explained that wide-scale bleaching usually occurs every three to seven years, but global warming is making the events more frequent.

“It seems unlikely that the time frame involved would allow evolution to occur,” Hughes said, which means the coral would not adapt quickly enough, causing large numbers of coral to die as a result of bleaching.

Most marine biologists, including Hughes and Langdon, agree that cutting carbon dioxide emissions and reducing the rate of increasing global temperature are also required to preserve coral reefs. However, Langdon feels that the prediction of species that are lost by the year 2020 in the report “might be a little extreme,” but he does feel that the biodiversity loss predicted in the report could definitely be seen by 2050, and by 2020, significant damage will be done.

“In the past, the reefs have had time to recover,” Langdon said. “By 2020, every summer could be hot enough to cause bleaching.”

I am student of environment pollution in Ms.C in Iran i want to select my teisis to analys heavy metal on the coral reef in south of Iran in Persian gulf . but i havnot method for this and iran didnt work and experience a bout them can you help me and introduce a good method and guid me or send me agood article similary that worked in other place
best regard
sharifan

I am student of environment pollution in Ms.C in Iran i want to select my teisis to analys heavy metal on the coral reef in south of Iran in Persian gulf . but i havnot method for this and iran didnt work and experience a bout them can you help me and introduce a good method and guid me or send me agood article similary that worked in other place hsharifan@yahoo.com
best regard
sharifan

I am searching for Mr Benjamin Leach who worked in Africa Uganda-Kagando Haspital and his mother is Hellen Leach. These people helped me alot and I would like to share my successes with them. Whoever knows their whwereabouts pleased let me know.