Studying wild mustard weed may uncover the way the environment and genetics interact during a crucial moment in the life of a plant. 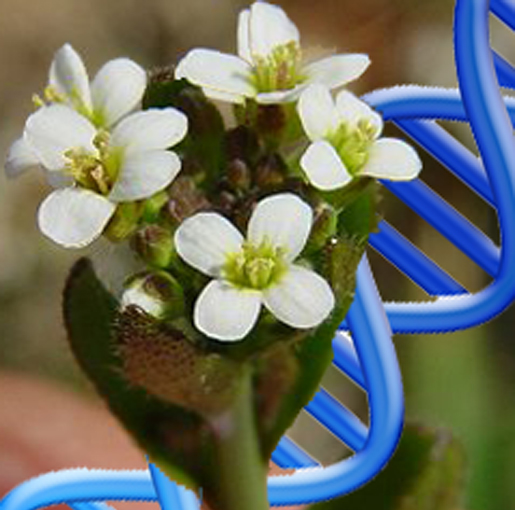 In labs around the world, geneticists cultivate rows of scraggly weeds. In each plant, a gangly stem protrudes from a bushy clump of leaves the size of a tennis ball. Arabadopsis Thalinia, more commonly known as wild mustard weed, is not exotic or striking; it’s the kind of plant you’d probably step on without even noticing.

But the humble weed is helping researchers understand the genetic basis for why some varieties of the same species prosper while others suffer. Implications are widespread, from helping farmers know when their crops will grow to illustrating mechanisms for adapting to climate change. In his plant genomics lab at New York University, Michael Purugganan and his team of graduate students and postdocs each use Arabadopsis to study the network of genes that control when plants flower.

The entire genetic code of the Arabadopsis plant is sequenced, which makes it possible for researchers to study how varieties of the weed are matched with their specific environments by comparing the genes of one variety of wild mustard weed to the genes of others. Purugganan’s lab also uses the genetic code to find how different environments interact with genes to control the life cycle of the plant at their small outdoor plot at Cold Spring Harbor, New York.

“We’re now in a world where global climate change is a reality and it’s known that many organisms are either adapting or mal-adapting to these global changes,” says Purugganan. British botanical records, some stretching back over 150 years, show plants have been flowering earlier as a result of climate change. Understanding what genes are being turned on or off in these plants will be vital to predicting how plants and crops fare over the next century and reacting to these changes.

A plant growing outdoors, like those in Purugganan’s test plot, senses cues like day length, temperature, and the sun’s intensity and uses these signals to determine when it should bloom and drop its seeds. Plants do not have a brain or nervous system to evaluate environmental signals and make decisions. Instead, the environment influences the plants’ gene expression–which plant genes are active and the level of that activity–ultimately triggering changes in the plant like flowering or growing.

Kitty Engelmann, a postdoctoral fellow in the lab, studies FRIGIDA, an aptly named gene that keeps mustard weed from flowering until the plant experiences a period of cold weather, usually winter. After the cold spell, FRIGIDA activity stops. The gene is present in most Arabidopsis varieties, but is conspicuously missing in a few, resulting in plants that flower early.

FRIGIDA genes are different amongst Arabadopsis plants. One particular type of FRIGIDA may allow a variety to bloom early, while a second type causes it to bloom late. If plant has a FRIGIDA deletion, it might flower too early, before winter, and die.Variations in FRIGIDA are important for matching a variety of mustard weed to its ideal environment.

Today, Engelmann is running around the lab with three timers stuffed in the back pockets of her jeans to time genetic tests she is running on individual Arabadopsis plants. She is analyzing the DNA of a new generation of plants to identify the type of FRIGIDA and a relatively unknown gene, Hua2, each of her plants has. FRIGIDA is just one gene in a complicated network of genes related to flowering; Arabidopsis has about 45 flowering genes scientists know of. Like FRIGIDA and Flowering Locus C, many of these genes influence each other, a process geneticists call epistasis—a very abstract system that’s difficult to measure, even in the laboratory. Engelmann’s goal is to find out the epistatic relationship between FRIGIDA and Hua2 and discover how different combinations of these genes relate to a plants’ flowering time.

Engelmann pulls two trays of pom-pom looking plants from the lab’s growth chamber, a contraption much like an over-sized, old refrigerator with a sunlamp stuck inside. Colored cocktail toothpicks mark each plant. Yellow toothpicks mark plants that lack FRIGIDA genes, and nothing seems to keep these plants from flowering.

Depending on when the plants with different combinations of FRIGIDA and Hua2 genes flower, Engelmann will be able to see if the genes are communicating with each other. “It’s interaction at the gene level, which is really neat,” says Engelmann. “People talk about how that could happen, but there’s not so many clear examples.”

The particular genes Engelmann studies differ between the many Arabadopsis varieties that grow all over Europe, Asia, and North America. Over this wide range–from nearly tropical to nearly arctic–varieties have developed specific genetic strategies to cope with climate. For example, several warm weather species were able to adapt to blooming in summer months or in tropical environs because they lacked FRIGIDA genes and thrived in year round warmth. It these same species lived in a cooler climate, they would flower too early and die.

But in this experiment, as well as most botanical population genetics studies, plants are all grown in a lab growth chamber under very specific and constant conditions–set times for light and dark, unwavering temperatures, and no wind. These conditions are drastically different from those in the wild. That’s why Purugganan maintains an outdoor plot of Arabadopsis in addition to the laboratory plants.
“There’s no animals coming by peeing on you and eating you,” said Christina Richards, another postdoctoral fellow in the lab. Richards compares the gene expression of plants grown in the wild to genetically identical plants grown in the lab’s growth chamber.

The experimental field site, located at Cold Spring Harbor Laboratory on Long Island, New York is a three-foot square of dirt lined with PVC pipe set in a corner of a field behind small greenhouses. Since Arabidopsis is a very small plant, it doesn’t take much room to grow hundreds of them. The turn of the century stone cottages and massive mowing equipment nearby make the array of pipe, twine and quarter-sized Arabadopsis plants seem particularly out of place. There are more colored toothpicks: blue picks for German plants, red picks for Tajik plants, and pink picks for plants from Rhode Island.

“This is our field site… isn’t it funny?” Richards jokes, commenting on its size and placement. As she crouches down to examine the tiny plants she coos with excitement, “Oh my God, they’re flowering.”

“Hi cutie!” She addresses each plant with a new flower. There had been an unusual warm spell in January, two months before, and some of the plants had already tried to flower unsuccessfully. When Richards had been at the site just a week ago the plants were covered with water from persistent rain. “I was worried they were all going to drown,” she said.

When 10 percent of the first variety of plant has flowered, Richards will take samples from all the plants and extract their RNA (a direct measure of gene activity), to see what genes are being expressed. She’ll do this again when 10 percent of the second and third species flowers. Then, Richards will compare the RNA from the plants at the site to their counterparts in the lab.

Having a picture of the levels of specific RNA will give Richards the opportunity to see how genetic patterns differ across the three varieties she’s planted and how that pattern changes during the plants’ life cycle. She will also be able to measure how the harsh conditions at the field site at Cold Spring Harbor alter the pattern compared to plants grown inside the growth chamber at NYU alongside Engelmann’s.

Richards and Purugganan view the experiments as a “critique” on the way most population genetics studies are carried out because results in the field might differ wildly from plants grown in the growth chamber. “If it’s totally different, it’s actually kind of interesting,” said Purugganan, “it’s this uncontrolled nature that is important, because that’s what real organisms have to deal with. But it’s also this uncontrolled nature that makes scientists a little bit crazy.”

The study is in the most preliminary stages with the first data expected this winter. The researchers hope the data will secure funding for the very expensive genetic analyses needed for the next steps of the experiment, in which the levels of all the genes in the outdoor and indoor plants will be measured and compared.

“Oh my God, It’s snowing!” Purugganan said interrupting his own thought as he glanced out the window on an April day; it had been wildly sunny only a few moments before. “See, organisms can deal with that, but we have a poor understanding of how they do.” He is working on figuring it out.