Unlocking the Mystery of Red Tide

After more than 20 years, researchers make a key discovery about red tide toxins, with some surprising applications. 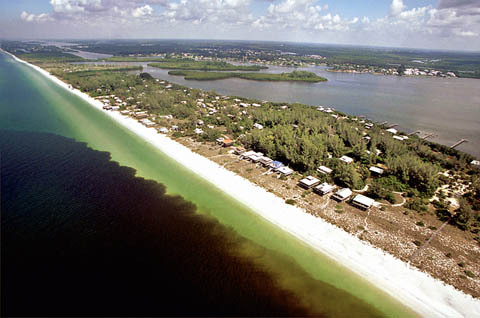 Algae hitched a ride north on the Gulf Stream, producing a rare red tide on the northeast coast of Florida throughout October. Beachgoers were told to stay away. Asthmatics were urged to wear facemasks. Fish kills were reported across multiple counties. Like all harmful algae blooms, no one is quite sure what caused it, and no one can say for sure when it will retreat.

But there is hope on the horizon. Chemists at the Massachusetts Institute of Technology have unlocked a 22-year-old puzzle on how certain algae produce these toxins, which may have implications not only for the marine environment but also for a new class of drug therapies.

Red tide is a misnomer for toxic algae blooms, which are caused by a few dozen types of algae and do not always color the water red. In the case of Florida red tides, an organism called Karenia brevis makes a ladder-shaped toxin, called brevetoxin, that can kill fish and even manatees and irritate lungs when inhaled.

In 1985, Koji Nakanishi at Columbia University suggested that ladder toxins are created through a series of events called a cascade. During the cascade reaction, small molecular rings of the ladder break open and additional “rungs” are added, creating the backbone of the toxin. This hypothesis was intriguing, but for more than two decades no researcher could make the cascade unfold in a way that mimicked the natural environment.

Enter Timothy Jamison, a synthetic organic chemist at MIT. While other chemists were using a chemical to force the reaction to happen, Jamison says this is clearly not how nature does it. The team at MIT tried a more direct route by adding the first “rung” of the ladder to spur the reaction.

“What we finally realized was that if we attached a template, that template might be enough to tip the balance towards that reaction,” he explains. Although nature does not use this template, Jamison suspects an enzyme takes its place in the natural reaction.

But there was one more piece of the puzzle. Researchers were not doing the experiment in water because most organic compounds are not soluble in water, Jamison explains. But this reaction actually works even better in water, he says, “and since these organisms live in water, it makes sense.”

Until this discovery, Jamison says making only a few milligrams of these molecules, which are responsible for nearly half of the red tides worldwide, took the equivalent of one person working for a lifetime. Now they can make these pieces in only a few weeks.

“What Jamison has done is very impressive because he has managed to make this core so easily and so efficiently and so specifically,” says John Schwab, a program director at the National Institute of General Medical Sciences, which provided funding for the research. “It’s a big advance, but he’s not yet synthesized the natural compound.”

Even without the entire compound, Jamison says these ladders can be used as bait to attract the enzyme causing the cascade. Once marine biologists can identify the enzyme, “then you can do genetic experiments to find out the biochemistry of how they make it,” he says. Jamison estimates researchers could have results in as little as six months to a year addressing why these blooms, which cost the U.S. $50 million annually, occur.

The synthesis of these molecules also has repercussions for creating novel drugs. Daniel Baden, the director of the Center for Marine Science at the University of North Carolina Wilmington, says work is already being done to design treatments for cystic fibrosis, ciguatera food poisoning, and chronic obstructive pulmonary disease using this synthesis.

For cystic fibrosis, Karenia brevis, the organism responsible for Florida red tides, also produces a natural anti-toxin called brevenal. While brevetoxin is a lung irritant when inhaled, Baden says brevenal actually restores normal lung function. Researchers at the University of North Carolina are developing brevenal in conjunction with the pharmaceutical company aaiPharma, Inc. and hope to begin clinical FDA trials in about a year. “I’m really excited about Jamison’s group finding this new way of producing these molecules,” Baden says. “And we’re excited to see how far we can push that.”

Read about plans to fertilize the ocean in order to promote carbon sequestration.