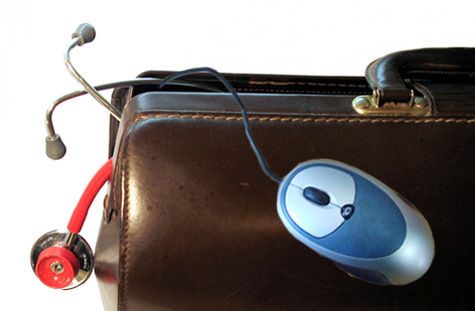 At least one in 12 patients who die has been diagnosed incorrectly, according to a 2003 analysis in The Journal of the American Medical Association. When trying to figure out the occasional difficult case, doctors sometimes get it wrong. Yet they rarely use the highly accurate computer systems designed to help with the identification of ailments.

Take the example of DXplain, one of the more popular diagnostic software tools around for physicians. DXplain is available for free on the Internet to every licensed health care professional in the United States. Yet fewer than one in 10 physicians has used the program during its more than 20 years on the market, estimated Dr. Edward Hoffer, a key DXplain developer and professor of medicine at the Beth Israel Deaconess Medical Center in Boston.

Many of these computer programs, like DXplain, allow the clinician to plug in patient symptoms and demographic information such as sex, age, race and geography. The computer then compiles a list of possible diagnoses, and the doctor can click away for more information on each medical condition.

Using these programs is time-consuming and cumbersome, and there is not enough evidence that using them improves patient care, noted Dr. Peter Stetson, professor of clinical medical informatics at Columbia University in New York. He views these challenges as opportunities for researchers to improve these products.

But doctors’ psychological barriers may be even harder to overcome than these technical issues.

“The problem with diagnosis is we do not know when we do not know,” said Dr. Joseph Britto, co-founder and developer of a new diagnosis program called Isabel. He estimated that doctors are wrong in about one in 15 cases.

The vast majority of cases doctors see are clear-cut, explained Dr. Michael Cantor, chief medical information officer at Bellevue Hospital in New York. “You don’t need a diagnosis system to tell you that a 55-year-old smoker coming in with chest pain is probably having a heart attack,” added Cantor.

But when a case is not so run-of-the-mill, DXplain’s Hoffer said, physicians may “pigeonhole” it without considering all the evidence. “Doctors who’ve practiced for a long time tend to assume that patients have a common disease they’ve seen before,” said Hoffer.

Physicians also get inadequate feedback on their diagnostic mistakes, explained Eta Berner, an expert on diagnostic support systems and professor of health informatics at the University of Alabama at Birmingham. “They can make the wrong diagnosis, treat it fine and never realize that they made an error.”

Another possible factor leading to mistakes is that doctors are often overconfident in their diagnoses, according to research published in the Journal of General Internal Medicine in 2005. In this study, a group of physicians were asked to list possible diagnoses for some challenging cases and if they would have sought help with their decisions. When they were wrong, they would not have looked for assistance in more than one in three instances.

Given these pitfalls, one way to improve diagnostic accuracy may be to work with doctors’ existing attitudes instead of trying to change them.

“Make it easy for me to do the right thing. Make it hard for me to do the wrong thing,” explained Dr. Abha Agrawal, director of medical informatics at Kings County Hospital Center in Brooklyn.

For instance, researchers are exploring the possibility of integrating DXplain so that it can scan electronic patient records and then pop up with a note when the symptoms and the diagnosis do not match, said Hoffer.

But even then, physicians might ignore these digital reminders, as was shown in a 2005 study in the Journal of the American Medical Informatics Association. “My favorite analogy is the little paper clip guy in Word,” said Berner. “There’s no one I know who doesn’t turn him off immediately.”

Another solution might be to require doctors to consult a computer on every case. “Physicians should not be allowed to make a diagnosis without using a checklist,” said Isabel’s Britto, comparing such a list to take-off and landing protocols in aviation. In his system, such a list can be just one click away from the patient’s record.

Attitudes about computer-assisted diagnosis could also change naturally as a new generation enters the medical field. Younger doctors are more eager to use the technology, according to Dr. Stephen Borowitz, a pediatrician who oversaw the adoption of Isabel at the University of Virginia Health System in Charlottesville, Va. “That cultural shift is already happening,” he said.

Meanwhile, if you are uneasy about your own diagnosis, what should you do? Share your concerns with your doctor and ask for other possibilities. If she can’t provide one, it may be time to get a second opinion.

Read about the risks and benefits of prescribing off-label drugs.

Find out how researchers are battling hospital-acquired pneumonia.

This article does a real service by bringing to greater attention the problem of diagnostic errors, and the potential role of decision support products in helping to improve the reliability of medical decision making.

Although informatics solutions are appealing, the article correctly emphasizes that patients can play a substantial role in helping to reduce these errors by being proactive – ask questions, ask about other possibilities as the author suggests, and most importantly learn the expected course that the physician expects, and how to get back to him\her if the real course is different.

Readers of this article would also be interested to know that the issue of diagnostic error will, for the first time, be discussed at a national forum this Spring. “Diagnostic Error in Medicine” is a 2 day conference co-sponsored by the Agency for Healthcare Research and Quality (AHRQ) and the American Medical Informatics Association (AMIA). Conference details can be found at

As a patient (and potential patient in the future), I was glad to learn about these diagnostic tools and how reliable at least some of them are. This article makes me feel more empowered to speak up, as do the guidelines in Mark Graber’s informative Comment.

This very well-written article makes clear that despite potentially life-saving utility, these programs are infrequently used, and answers that apparent paradox with a number of valid explanations. As a physician, I would add that the time pressures on physicians are so great and the cumbersomeness of the programs is such that it would be impossible to expect every physician to use this aid on every patient.

Perhaps the most effective way to use this technology would be to have a non-physician professional with a laptop review every hospital chart and use the algorithms to be sure each patient is being treated properly. Now we’ll have to figure out how to get reimbursement for this task from the insurance companies.

As a physician, I feel these expert systems can be improved on two areas which should then prevail over other reasons why docs don’t use them much:

1. They are mostly 1-way counselors – if these systems can be customizable allowing the doc can teach them, customize them and propogate them to other users like a 2.0 ‘avatar’, that will be great and allow docs to be ‘stars’. For example – my own customized and “tutored” expert system application could be ‘subscribed” or “rented” by other doctors to drive their own expert systems in part (like for specific disorders) or in entirety

2. The systems need to have a case-based-reasoning functionality allowing them to learn themselves to fine-tune their diagnostic skills depending on the pattern of patients in a given geographic area, rather than being static knowledge bases at the mercy of vendor updates…

This wonderfully written article highlights one of the major problems plaguing the U.S. health care system today, which is the lack of Information Technology (IT) being utilized. When the landmark national reports produced by the Institute of Medicine came out, they exposed the inadequacies that plagued the U.S. health care system and the need for major reform. Consider this: 44,000 to 98,000 preventable deaths occur each year due to medical errors. This should not come as a surprise given the lack of IT in health care. If IT were used more in health care, medical errors would be reduced (e.g., giving the wrong drug, or the wrong dose, or the right drug but to the wrong patient), and diagnostic accuracy would certainly be improved, along with better treatment plans (e.g., through decision support systems at the point of care).

So why has the health care industry been so slow to adopt IT? Well, probably many reasons, cost being among them, but I definitely agree with the author when she asserts that, “doctors’ psychological barriers may be even harder to overcome than these technical issues.” As the younger, more tech savvy physicians come of age we will definitely see greater adoption of IT, and on all levels (from decision support systems at the point of care, to more heavily “wired” hospitals and physician offices, to increased internet tools for patients). For the time being, as the author notes, it is extremely important for patients to be more involved in their care. Hopefully this will provide a push, or tipping point, to spread the adoption of IT in health care.