Welcome to T-Rex U

For the first time in America, a natural history museum is handing out diplomas. 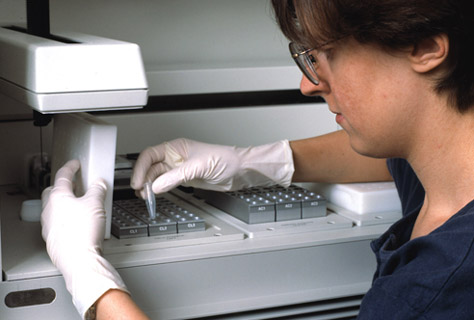 A researcher works at the Sackler Institute for Comparative Genomics, one of the facilities that will be available to Ph.D. students at the Richard Gilder School. [Credit: Denis Finnin/AMNH]

The American Museum of Natural History in New York is about to conduct an unprecedented new experiment. Rather than an experiment in genetics or paleontology, like those performed every day at the Museum, this one involves the institution of the Museum itself. No longer content with just being display- and research-oriented, the Museum is also becoming a graduate school.

Backed by an endowment of over $50 million, the founders of the Richard Gilder School expect the program to do more than just train new academics. They hope that the school will both promote the Museum’s own integrative brand of biology as well as redefine its relationship with the public.

“This is really a new kind of program that emphasizes comparative biology in a way that no other program really does,” said John Flynn, dean of the Gilder School.

By providing students with access to one of the largest collections of natural history specimens in the world, as well as the Museum’s labs, Flynn believes the program will produce scientists with a wider view of nature than is normally developed in other programs.

The program centers on an interdisciplinary biology program that draws on all of the Museum’s strengths, including evolutionary biology, paleontology and biodiversity. While most programs tend to focus on model research organisms, such as the mouse or the zebrafish, the Gilder School program will expose students to the widest possible range of organisms.

The program also has two major design components that differ from a traditional biology Ph.D. program. The first difference is the program’s accelerated nature. Rather than the usual doctoral schedule of four to six years before graduation, the Gilder School hopes to start graduating students in three to four years.

Second, the program de-emphasizes classroom time in exchange for a greater focus on producing peer-reviewed literature, working in laboratories and helping the Museum with its educational mission. That educational mission includes classes for the general public and museum members, K-12 classes and courses to keep educators up to date on natural history research. All of these initiatives will now fall under the umbrella of the new Gilder School.

One concern for the program centers on the reception graduates will receive from the job market. While some worry that a degree from a museum lacks the prestige of a diploma from a better-known university, Flynn believes that at the highest levels, graduates of the Gilder School will be judged by the scientists they studied under and the research they conducted, not by the name on the diploma.

Lance Grande, senior vice president and head of collections and research at the Field Museum of Natural History in Chicago, echoed Flynn’s belief. Grande concurred that the students will not face prejudice for graduating from a non-university, adding that “any progress at any research-based museum is a boost to us all.”

Grande suggested that publicity for the Museum’s experiment in higher learning could motivate donations for similar purposes at other institutions. However, given the Museum’s pre-existing infrastructure, resources and massive donor pool, the Gilder School may be a program that only the pre-eminent American Museum of Natural History can afford to develop.

Regardless of the Gilder School’s eventual impact on the field of higher education in general and natural history in particular, staff members are eagerly awaiting the arrival of the first pupils. While there will only be four students in the inaugural class according to Flynn, the Gilder School has already garnered considerable attention.

“There was a deluge of inquires about the program by students who were interested in applying to it,” said Flynn. “Twenty-five to 100 applications, that’s vindicating.”