Why do I get a little bump on the tip of my tongue when I eat a lot of sugar? 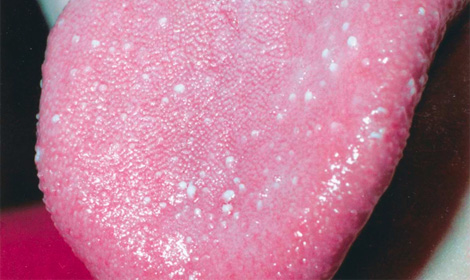 The result of having a bit too much sugar? [Credit: Robert Brannon]

You’re at the movies, and the lure of a box of candy is too much for you to resist. You are so caught up in the action that before you know it, the box is gone. Soon, you start feeling a little sick, hyped up on all that sugar, and to top it all off there are a few small, yet slightly painful bumps on the tip of your tongue.

What exactly are those things?

Discounting the old wives’ tale that blamed the bumps on telling lies (thus the name “lie bumps”), the real answer is likely transient lingual papillitis (TLP). TLP is an inflammation of the round, mushroom-shaped structures that house taste buds called fungiform papillae. There is no single cause of TLP, and many factors have been implicated, including certain foods, stress and gastrointestinal disorders.

Although some people report having the bumps after eating raw vegetables, acidic and sugary foods tend to be the main causes of TLP. TLP varies from person to person, which is why it is believed that many factors can bring about its onset. While you may get the annoying bumps with every sugary indulgence, your best friend may satisfy his or her sweet tooth while being unable to eat a lime. The good news is that TLP is not dangerous and typically clears up on its own in a few days. Rinsing with salt water or mouthwash is sometimes helpful, and good oral hygiene is never a bad thing.

TLP was first diagnosed as such in 1996 in the journal Oral Surgery, Oral Medicine, Oral Pathology, Oral Radiology, and Endodontology. Prior to 1996, there is little documentation of the condition, and there is still not much known about it except that while it may be a nuisance, it is not dangerous.

A related condition to TLP is ELP, eruptive lingual papillitis. This condition is almost identical except that it typically starts in children 5 years of age or younger, and unlike TLP, it has been found to spread to the child’s family members. A 2004 study in the British Journal of Dermatology found that affected children experienced not only the typical bumps, but also difficulty in feeding, excessive salivation and in some cases fever and swollen lymph nodes. Like TLP, little is known about the cause of this condition, but since it was found to spread to family members, many doctors think it is an infection.

As a note of caution, not all tongue bumps are simple taste bud inflammation. If the bumps persist for more than a few days they could be an indication of something more serious, like the herpes simplex virus-1. The herpes virus is known to cause sores on the lips and tongue. These sores will differ from simple taste bud inflammation in that they will last longer and often ooze a yellowy liquid after a few days. The sores also often follow a fever or cold like symptoms. If you think you might have herpes, you should consult your doctor immediately.

To sum up, the bumps on your tongue are likely nothing more than simple inflammation. While there is no single cause, if you think the bumps might be due to excessive sugar intake, they probably are. So go ahead and splurge on those Sour Patch Kids! Your tongue is in no danger, even if your teeth might be.

I have had “lie bumps” off and on all my life. My parents said it was because something I ate had upset my stomach and would give me a teaspoon of paregoric. Since I am unable to find paregoric, haven’t seen it in years, I now take 2 tablespoons of Mylanta before I go to bed and it is ALWAYS gone by morning !!!! Just like it was with paregoric!

Thankyou for information. I expected my ice cream to be more crystalline. The elasticity was of concern to me because my “guts” let me know what it will not tolerate. Canola oil …serious revenge !!!! So I eat stuff I can recognize form best local source..I have reached Elderhood.

Thankyou for the information. My guts let me know quite quickly..
Canola oil ….fiercely “No…No!” I eat simply, recognizable, local, reliable sources. I have reached Eldrerhood.

omg, i was so afraid. i thought i had like a tounge virus or something. but i ate tons of candy before my tounge started feeling like it was burning, thanks for writing this xoxo

Ugh, lie bumps are annoying. I can’t really eat without pain and discomfort when I have a lie bump on my tongue. The pain seems to be worse enough to wake me up at night when I have been sleeping. And brushing my tongue only exacerbates the pain so I don’t recommend brushing the lie bumps for relief. For me, it looks like a raised white bump on my tongue that hurts really bad if I press down on it. The tongue is a very sensitive muscle that contains alot of nerves in the mouth inside your face. Even the slightest local trauma (accidentally biting or burning the tongue on food or drink that is too hot) can cause inflammation of the taste buds and killer pain. Ouch. Lie bump pain makes my mouth water and makes me feel like crying if I touch it . For relief, I just continue my oral hygiene and gargle with an alcohol-free mouthwash twice a day: once in the morning and again at bedtime until the bump goes away. Sucking on ice is another option for temporarily pain and inflammation relief. Unless you want holes in your tongue, I strongly do not recommend cutting the bumps off. That will only aggravate the bumps further and create excruciating unbearable pain and bleeding.

I hate these! I always get them if I have had a lot of Mt.Dew or Mt.Dew products such as kickstarts etc. The fastest way I have found to get rid of them is to dry that part of your tongue – then dip it in Hydrogen peroxide and take it out and let it bubble. Hydrogen Peroxide is a germ killer anyway- but it takes some of the pain away and seems to help them go away faster.

I get them from eating acidic fruit. I make them go away by putting a chewable antacid like a Tums or a gaviscon chewable on my tongue and letting it dissolve there.. Do not chew it, let it dissolve and keep it in contact with the bumps as long as possible. I got this advice from a pharmacist when I was young and it works for me.

I’m glad I know what it is I get them from strawberry. Candy thanks a lot. Now I know it’s not cancer my mom and dad died from cancer