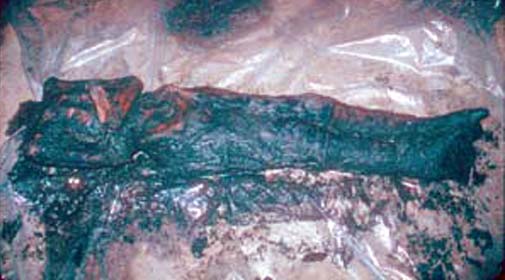 Some scientists fear that frozen bodies, such as this one uncovered in Siberia, will transmit preserved smallpox virus. [Credit: Imre Friedmann]

Yards and yards of clear plastic sheeting line the cellar floor, dwarfing the corpse: headless, frail, supine. The young bony arms — covered in fine black powder from centuries of immobility in the frozen tundra — are crossed at rest, reminiscent of a ceremonial burial. Camera flashes illuminate the scene. Several dozen scientists stand around the body, murmuring in Russian and English about the find of the day.

How long do you think it was buried? Do you think it’s male or female? How did they get it back to camp? And the pervasive thought: I don’t think we should touch it. He could have died of smallpox.

Smallpox was a vicious disease before its eradication in the 1970s, but the virus is hardy and can survive long-term storage. One such storage unit is the tundra of the high northern latitudes that preserves an unknown number of bodies that could have died from smallpox. Global warming is now rapidly thawing this freezer, increasing the chance that someone could come into contact with a smallpox-infested body, thereby reintroducing the disease.

Smallpox rivals malaria as the most deadly infectious disease ever to affect humans. Throughout history, people looked for ways to combat the disease, priming their immune systems with remedies such as sniffing ground-up scabs or smearing pus into open wounds. The first true vaccine — developed in 1796 by Edward Jenner — was for smallpox.

The variola virus responsible for smallpox, which causes fever, fatigue and pustules that leave deep scars on the skin, decimated the Americas after Columbus landed in the West Indies. The disease similarly ravaged the people of the Arctic, and an estimated 300 million people died from smallpox in the 20th century alone before the World Health Organization’s vaccination campaign was completely effective. The last case from natural exposure was in the late 1970s in Ethiopia.

Today smallpox exists only in highly secure U.S. and Russian laboratories. According to Jonathan Tucker, a senior fellow at the Center for Nonproliferation Studies, “the greatest risk of smallpox infection today is from the continued scientific research with the live virus, as well as from the hypothetical existence of undeclared stocks of the virus that could pose a risk of accidental or deliberate release.” Many scientists agree that an accidental or deliberate release of the virus is a dangerous possibility, especially since vaccinations of the general population ceased in 1972. In response to the attacks on Sept. 11, 2001, the Bush administration ordered the inoculation of U.S. military and health workers so that critical operations would not be affected.

It was 20 years ago when the headless body was found at a bend in the Kolyma River and brought to camp — at the Northeast Research Station in Cherskii, Siberia. On that day the tundra was changing to red and gold, and longer nights had begun to touch the horizon. Late summer is prosperous near the Arctic Circle: Local fishermen descend on the river to plunder sturgeon, and paleontologists scan the banks by boat and foot for mammoth bones or frozen bodies of ancient musk ox and horses.

Imre Friedmann remembers the day that the body was found. He trudged into the station, finally escaping the plague of swarming mosquitoes, to be told of the body in the cellar. “Everybody avoided handling it,” he recounts in precise, accented English. Friedmann, affiliated with the NASA Ames Research Center, traveled to the Arctic to study the bacteria that thrive in the extreme climate of this region.

Other projects have been similarly affected by the fear of smallpox. Archaeologists halted work in the London crypt Spitalfields in the mid-1980s after finding smallpox scars on a corpse, and a librarian from Santa Fe, N.M., was vaccinated after finding a smallpox scab in a Civil War medical book. In these cases, the virus was no longer viable. But a construction worker in the United Kingdom did contract the disease while demolishing a building that had housed smallpox victims, and researchers in Holland found a live virus in a 13-year-old scab.

Bodies frozen in the north could be even more fertile ground as a reservoir of the virus. Smallpox is resilient when frozen. Louise Parker and James Martel of the Army Corps of Engineers reported that Vaccinia, the virus used in the smallpox vaccine, survives short-term freezing and thawing as well as storage at low temperatures. And in the 1950s, U.S. Army scientists found that the variola survived three years of freezing, particularly at very low temperatures.

In the 1980s, a mass grave near Pokhodsk, Siberia, was exposed by a river and local residents demanded testing of the bodies. Researchers took all the necessary precautions of an epidemic: protective gear, antiseptic cleansing and vaccinations. But even though some bodies were well preserved after a hundred years in permafrost, “viable smallpox virus was not detected, but the virus antigen was discovered,” says Sergei Davidov, currently the assistant director of the field station in Cherskii.

We are soooo screwed as a species….at least we know what causes it- instead of thinking “I got smallpox because of sinning”, as people thought in medieval times.If it is dead do not touch it!!

We are screwed as a species because of idiots and morons who, first believe this crap, second who write about it as though they are experts and not merely echoing the moronic “Sky is falling” mantra their mates are squealing about and finally because of idiots and democrats like “RANDY” who believe the sky is falling, are rushing about pulling their hair and beating their chests shouting, “We Done It. We Done It” If Randy and the other “experts” would study REAL science rather than basing their moronic squeals on false and manufactured “data” they might be far wiser than they attempt to portray themselves. But, wont work. Too many idiots around. So, “THE SKY IS FALLING! THE SKY IS FALLING!”