Coping with fears of genetic discrimination leads some people to take matters into their own hands. 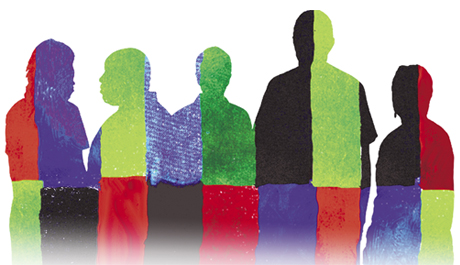 Are these the new colors of discrimination? [Credit: Jane Ades, NHGRI]

Dennis Pollock has not gone so far as to tell his children to lie—if they are asked about their family history, they have to say that they are carriers for a genetic disease nicknamed alpha-1. But Pollock says there is no need to volunteer the information. He is worried that their insurance companies or future employers may discriminate against them. This concern about genetic discrimination is a fear a lot of us live with, he says.

Pollock saw seven doctors before correctly being diagnosed with alpha-1, and he ultimately needed a double lung transplant. He now runs an alpha-1 support group in Oklahoma and says he is fortunate to have kept his insurance the entire time. However, Pollock is worried about his own children, as well as the families he talks with. “I’m sure I want them to do what they need to with their lives,” he says, and he wants them to be their own health advocates.

There is little conclusive data on the pervasiveness of genetic discrimination in the U.S., but 92 percent of Americans recently polled said they were concerned that genetic test results could be used against them, according to the Genetics and Public Policy Center at Johns Hopkins University. Without adequate protective federal legislation, this fear often leads people to take their health into their own hands. Some give a fake name or no name at all, pay out of pocket for tests and lie, or just don’t get tested, all of which can be detrimental to their health.

“You want your doctors to know everything about you,” says Susannah Baruch, a genetics policy expert at the Genetics and Public Policy Center at Johns Hopkins University.

Although many experts say that Americans are afraid to participate in research studies, Pollock and others encourage alpha-1 genetic testing for those most at risk through a nationwide study. The test is free and anonymous, and the finger-prick can be done at home. “If you think you have it, definitely do it,” Pollock says of people with certain lung diseases, for example.

In people without the disease, lungs are protected from naturally occurring molecules that would damage them. Patients with alpha-1, however, lack this protection, making them more susceptible to emphysema and other lung diseases. Some alpha-1 patients can also develop liver disease.

Though estimates vary, only about 5,000 of the estimated 100,000 people in the U.S. who have alpha-1 actually know they do, says Adam Wanner, the scientific director of the Alpha-1 Foundation, a nationwide organization that funds and promotes research. The diagnosis has benefits: If alpha-1 patients know they have the disease, they may decide to quit smoking because of their vulnerability or seek proper treatment.

So why aren’t more people being tested? Among other reasons, it is not always clear whom to test because the age of first symptoms can vary. Often, alpha-1 is not what doctors think of first when they see patients with lung or liver problems. Just as importantly, some people do not seek testing because they are afraid, says Miriam O’Day, who represents both the Alpha-1 Foundation and the Alpha-1 Association, which is a membership organization for patient support, education and advocacy.

However, whether these fears are founded is up for debate, says Michael Watson, executive director of the American College of Medical Genetics, an organization that works with an advocacy group called Genetic Alliance. The problem can be “how one defines discrimination,” he says.

It is difficult to compile data because cases can be settled out of court or might not even be reported. But some experts think people are right to be worried. “Cases of genetic discrimination have been documented,” writes Sharon Terry, the president of Genetic Alliance, in a prepared statement. Watson adds that people are increasingly likely to undergo genetic testing, even if few individuals are experiencing discrimination right now.

It is also unclear whether current laws can sufficiently protect against genetic discrimination. Many states have enacted their own laws, but advocates have put their hope for uniform federal legislation in the Genetic Information Nondiscrimination Act, or GINA. However, GINA’s future is uncertain after it was recently added to another bill before Congress.

GINA would extend the Health Insurance Portability and Accountability Act of 1996, making genetic discrimination illegal both in group and individual health insurance markets. In other words, the bill would also protect those who seek health insurance if they are unemployed or self-employed. In addition, protection from genetic discrimination would become a new civil right, says Baruch from Johns Hopkins.

Present legal protections are uncertain enough that alpha-1 advocates often want people to be cautious about testing until federal legislation clearly states that genetic discrimination is illegal. The Alpha-1 Association and Pollock, who also serves on its board of directors, encourage genetic testing, which can be anonymous, for high-risk groups.

Others buy genetic testing kits marketed directly to consumers to try to ensure complete privacy. However, Baruch says that with direct-to-consumer tests, “you don’t know what you’re getting. That’s the bottom line.” There is also the risk that patients may misinterpret the results without the guidance of a trained genetic counselor.

But the benefits of direct-to-consumer access outweigh the risks, says Trish Brown, clinical director at DNA Direct, a company that connects people with genetic information, direct-to-consumer testing and counseling. The company does not always require patients to speak with a counselor, though Brown believes that the company is helping fill a shortage of genetic counselors.

While DNA Direct and others offer alpha-1 tests, patients also have access to a different kind of direct-to-consumer test. Charlie Strange, a professor at the Medical University of South Carolina directs the Alpha-1 Coded Testing Study, the nationwide alpha-1 study that Pollock and the Alpha-1 Association advocate. He says it’s “the research world’s way of getting around the lack of GINA,” the proposed protective legislation.

Patients can test anonymously for free and can finger-prick at home as part of Strange’s program, which is funded by the Alpha-1 Foundation. One of the goals is to see if the tests will get more people to change their behavior, such as quitting smoking. The study includes research surveys, so Strange obtained a certificate of confidentiality from the National Institutes of Health. Even under subpoena, patients’ information would not be released, says Strange. While these certificates only prevent compelled, not voluntary, disclosure, Strange says participants also sign an informed consent form to further protect privacy.

Whether a patient chooses to discuss the results with a doctor, insurer or employer is ultimately up to him or her. As a result, Strange admits, his program potentially may be facilitating dishonesty because he realizes that some patients may deceive insurers. However, with any genetic test, if the insurance company asks legitimately, patients who lie about getting tested may be breaking the law, says Baruch. And in order to be covered, patients usually have to tell an insurance company why they need treatment.

Until recently, participants in Strange’s trial did not have access to a professional genetic counselor, though they could speak with Strange, who is a medical doctor and says that he knows the disease backward and forward. A counselor was not available until fall 2007, although the study has been running since 2001. Still, speaking with the counselor is optional, and, of course, patients are free to consult their personal doctors.

Strange says that participants believe the study empowers them. He hopes that they will be inspired to make lifestyle changes, such as quitting smoking, to delay or prevent the symptoms of alpha-1. Even in the absence of protective federal legislation, Strange says, “I don’t mind putting that information in the hands of patients.”

Can your genes tell you the best way to quit smoking?

Read about how researchers are diagnosing diseases using genetic variation in the HapMap Project.

Congratulations for this well-done article on the pros and cons of uncovering personal genetic information in a country without good legal protection against genetic descrimination. It’s also a pretty good description of Alpha-1, the genetic condition. I hope it gets widespread distribution.

I would just like to know if there are an places we could go to get my husband tested for alpha-1? His father had it and his two sons are carriers. But we would really like to get him tested if you can help we are looking for a place that does free testing because we don’t have the money to go pay a dr. thank you brandy