What a Difference a Cell Makes

The battle against autoimmune disorders may come down to a newly discovered cell. 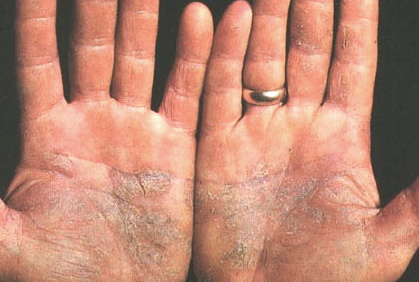 A recently discovered immune cell could be the key to treating diseases like psoriasis.

Whoever said you can’t have too much of a good thing failed to consider autoimmune diseases.

Individuals with disorders like psoriasis, Crohn’s disease and multiple sclerosis suffer from immune systems in overdrive. Their cells swoop in like clockwork to eliminate invading pathogens, but the cells never seem to get the message to stop—even when the infection is gone. With nothing harmful left to fight, the body’s own cells and tissues become innocent victims.

For years, researchers have struggled to understand how autoimmunity works and what can be done to stop it without crippling the immune system. Now, scientists believe controlling a newly discovered cell in the immune system called T helper cell 17 (Th17) may be the missing piece needed to solve the complex autoimmunity puzzle. Researchers are working to apply this knowledge in the form of new, effective drugs that will provide relief to the millions of people suffering from autoimmune disorders.

“This is suddenly forcing everyone to rethink what they already knew,” says Sarah Gaffen, an immunologist at the State University of New York at Buffalo. “Now we have a much stronger picture of autoimmunity.”

A slate of seemingly unrelated diseases falls under the classification of autoimmune disorders. Many can become debilitating: In multiple sclerosis, the immune system attacks the central nervous system, which can lead to paralysis and cognitive impairments.

The common thread for all these disorders is the inflammation caused by the body’s own immune response. For example, Crohn’s disease patients suffer from inflammation of the digestive tract (usually the intestine), which leads to diarrhea, bloody stool, pain and weight loss. Scientists say Th17 cells likely play a central role in such disorders because they can induce sustained, excessive inflammation.

T helper cells are the military generals of the immune system: They don’t actually kill the enemy, but they coordinate the attack. Researchers had long classified these cells into two groups, Th1 and Th2. But in late 2005 in the journal Nature Immunology, two research teams described cells that don’t fit either of those categories and named them Th17.

The pair of journal studies spawned a slew of new research that rapidly progressed beyond studying cells in test tubes and mice. In November 2007, researchers inadvertently observed the benefits of moderating these cells in humans.

The study explored the drug etanercept (marketed under the name Enbrel), which for 10 years has helped clear the irritating red scaly patches of psoriasis in about 70 percent of patients. This efficacy impressed Lisa Zaba, a biomedical graduate student at The Rockefeller University in New York, but she realized that nobody actually knew how the drug worked.

She analyzed blood samples of etanercept users to find out, expecting a reduction in the amount of Th1, which had previously been linked to autoimmune disease. Her data suggested otherwise. While Th1 levels remained steady well after symptoms improved, the disappearance of the rash correlated beautifully with a decrease in Th17 cells.

“A lot of the drugs already in use . . . probably target Th17 and we didn’t even realize it,” says Buffalo’s Gaffen, who was not involved in the research. The Rockefeller study, published in The Journal of Experimental Medicine, boosted the credibility of the Th17-autoimmunity link and illustrated the potential power of anti-Th17 medications.

Gaffen and other researchers say pharmaceutical companies are salivating over the idea of producing revolutionary autoimmunity medications, and the docket of clinical trials seems to support that view. Novartis, Centocor and Schering-Plough are among the companies conducting laboratory research or clinical trials to test whether inhibiting Th17 production can help autoimmunity patients.

“I think it’s going to be huge,” says Ivaylo Ivanov, a New York University immunologist. “Surely [Th17 research] will lead to a new generation of drugs.”

Ivanov’s optimism stems from his own research. Two years ago, he injected two sets of healthy mice with a harmful protein that induces the mouse equivalent of multiple sclerosis. The mice in the first group had normal immune systems, but the second group consisted of genetically-modified mice that lacked Th17 cells.

It didn’t take long for Ivanov to witness the impact of removing these cells. The normal mice became severely paralyzed within days, yet the Th17-deficient mice experienced only mild symptoms before continuing life as usual, long after receiving the protein poison.

“It was the first time I was involved in something so black and white,” says Ivanov.

Despite the excitement and rapid pace of research, do not start scouring the shelves for an anti-Th17 miracle drug just yet. While virtually everyone in the field agrees that Th17 cells are worthy of in-depth study, some experts warn against hailing them as the holy grail of autoimmunity.

“There might be a little too much hype over Th17,” says Zaba. “The immune system is more complicated than just a single mediator.” She points to her etanercept study as an example. While she found that the decrease of Th17 cells correlated with improving symptoms, she says that complete disappearance of the rash did not occur until Th1 levels also dropped.

Dr. Ethan M. Shevach, an immunologist at the National Institutes of Health, agrees with Zaba’s assessment. He says that after years of blaming Th1 cells for autoimmunity, scientists abruptly targeted their wrath on Th17 without considering a combination of the two. “In many of the diseases, Th1 cells still play important roles,” he says.

Two recent studies support the hypothesis that Th17 cells are not the only culprits for autoimmunity. Last year, a study in The New England Journal of Medicine described a successful 320-patient trial of a psoriasis drug that limits both Th1 and Th17 production. And in February, a study in the same journal reported an encouraging 104-patient trial of a multiple sclerosis drug that moderates B cells, yet another type of white blood cell in the immune system.

These findings lead Shevach to one conclusion: It’s going to take time and testing to discover the true nature of these disorders. “All these diseases are different,” he says. “You learn about what causes the disease by trying to treat it.” Although these disorders all involve an immune system gone awry, what works for the skin (psoriasis) may not work for the intestine (Crohn’s disease).

Researchers have another important issue to consider for drug development: Th17 cells are part of the immune system, so they do help protect against infection. This often gets overlooked because of the bad rap these cells receive. They are often portrayed as well-intentioned screw-ups that cause more harm than good.

As a result, medications curbing Th17 production could make users more susceptible to infection, a risk already assumed by autoimmunity and transplant patients taking immunosuppressant drugs. Many of the Th1-inhibiting drugs already on the market can be highly effective but also present the risk of severe side effects, including serious infection, liver damage and allergic reaction, because of the way they suppress the immune system.

Researchers know challenges lie ahead, but most feel confident these obstacles can be overcome. One of Ivanov’s colleagues just completed a study on regulating Th17 levels in the human body, adding to the multitude of Th17 research that continually floods scientific journals. Scientists don’t spend such time and resources on a project they think will hit a dead end, Ivanov says. People suffering from autoimmune disorders hope he is right.

This is pretty interesting … thanks for all the info!

The paper describes in a simple way what you have to know if you suffer of psoriasis. Thanks!