Reba Goodman defied tradition in making a name for herself in science. 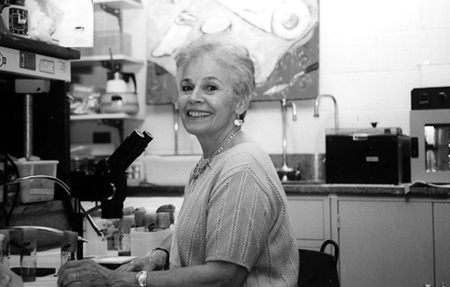 “This is me,” Reba Goodman says, referring to her ‘what you see is what you get’ manner. She lets out a boisterous laugh that reverberates across the wood-paneled bar. She touches my shoulder lightly, telling me to call her Reba.

We are in a local pub across the street from the Columbia University School of Medicine. Reba sits on a stool, wearing a bright pink long-sleeved shirt and a colorful vest with threads of matching pink weaved throughout, and peers thoughtfully through her pink-rimmed glasses. Despite her youthful manner, she turned 80 on December 8, 2007.

Her age, however, hasn’t pushed her away from a lifelong study of DNA, and her gender hasn’t stopped her from succeeding in a field dominated by men. Now she runs a molecular biology laboratory at Columbia University, where she received her Ph.D. over a half century ago.

Reba grew up in the late 1920s and early 1930s as the daughter of a well-known biochemist at Rockefeller University, A.E. Mirsky. Reba says she was supposed to be a musician like her mother, not a scientist like her father. “My father got me interested in how DNA turns on and off,” she says, putting the menu aside after her glass of red wine appears. Sixty years later, she continues to explore DNA. She describes a gene turning on and becoming active. Strands in the chromosome curl and bulge out, forming a puff of DNA, she says. She studies these puffs to determine how electromagnetic (EM) fields switch certain genes on and off.

In her laboratory, Reba points out a tray of water with small, black, pencil-like forms slithering around in it. These are planaria, worms known for their ability to regenerate severed body parts. Reba explains how after chopping the worms into segments, weak EM fields appear to aid in nerve repair while the worms try to regenerate their body segments. She presented these findings in 2007 in the Journal of Cell Physiology. She has also shown that exposing rats to low-level EM fields either before or after inducing a heart attack improves their rate of survival.

When Reba entered a Ph.D. program in genetics at Columbia University in 1950, she was one of only three women. She says her professors did not expect much from her or the other women. She recalls how the faculty took her off a teaching assistant position at Columbia and moved her to the all-female class at Barnard when her belly began to show with her first child.

“There were professors who stopped talking to me when I started showing,” she says good-naturedly and rolls her eyes. “I was holding a baby at the ceremony to get my Ph.D.”

From her description, I picture a sea of tasseled caps and black gowns, all the bodies relatively indistinguishable in their uniformity, except for two or three women and Reba, who stands out because of the infant cradled in her arms.

Reba’s eyes widen when I mention one of her mentors, Barbara McClintock. Reba describes working alongside her on the research that would later garner McClintock the 1983 Nobel Prize in Physiology and Medicine.

“When you worked for Barbara McClintock, you were hers. We ate every meal together. When she wanted to go somewhere, I went with her,” Reba recalls with admiration. “I thought the way she lived her life was so fabulous. She didn’t care what other people thought of her.”

Reba seems to be the same way. Martin Blank, her colleague of several decades, reflects that despite her pioneering research on electromagnetic fields and her professorship at Columbia University, everyone just knows her as Reba.

She left her salaried position in 1999 and put her own money into her research. “That is how much I like it,” she says.

Reba chuckles as she tells me that her doctor induced the births of all her children on Saturdays so her husband could be there. “That is the working scientist delivery system,” she says.

She talks about her children, now grown and with families of their own, and lingering worry creeps into her voice. “Having four children was a struggle. Finding household help was a struggle,” she says.

Juggling her professional career and personal life was not easy. Yet, in spite of this, she made her mark in a field with few women while raising four children.

I mention retirement, and Reba is quiet for a moment. She says, “I haven’t decided how I feel about retirement yet. I know I’m not ready yet.”

Other women in science, from Scienceline:

A music therapist brings the worlds of music and medicine together.

A feminist archaeologist uncovers the status of women in the past and today.

Good to see my mentor! Email me if you can and want.

Reba’s support and friendship helped me get through medical school in the 1970’s. Her spirit and strategy for taking on life challenges have remained with me through the years.