A program that rewards recyclers is growing, even in a state that once boasted some of the highest recycling rates. 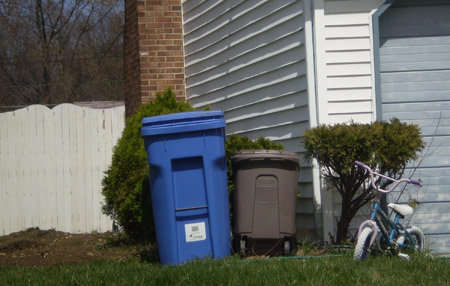 Glass crunches underfoot and cardboard falls into piles. Air blowers, rare earth magnets, human hands and steel bars direct a constant flow of the artifacts of modern life—last week’s newspapers, your neighbor’s orange juice containers, clunky detergent bottles with a lingering mountain fresh scent. Pressed bales of materials emerge from the recycling plant’s conveyor belts. For some Americans these discarded items can find new value as a cup of coffee, a discount on a restaurant meal or savings on a pair of sneakers.

RecycleBank, a for-profit company based in Philadelphia, is giving people a new reason to recycle by turning their containers and paper into money. Its incentive-based program, paired with updated convenience, has grown from serving six towns in 2006 to 64, in nine states, in 2008. The company has been partnering with communities, waste haulers and recycling facilities since its creation in 2004 to divert waste from landfills by recycling. The program also stimulates local economies with cash-value points earned for every pound recycled. RecyleBank calculates that its communities have saved close to 350,000 trees and over 23 million gallons of oil by recycling. Their plan of rewarding residents and making recycling easier is spreading, even into Cherry Hill, N.J., a town that already leads its county in recycling rates.

New Jersey was the first state to mandate recycling in 1987. The Garden State used to lead the nation with a peak rate of 45 percent in 1995, close to its 50 percent goal. Then the initial excitement and push for new programs died down. Today, recycling rates are slipping as Americans produce more trash every year. In 2005, New Jersey only recycled 33.8 percent of its municipal trash. A similar trend is visible nationwide. Even amid rising concern over the health of our planet, an environmental ethic is not enough to drive everyone to recycle. When local governments combine the need for incentives with the rising costs of trash disposal and the “going green” theme, they see a way to save money by boosting recycling rates.

“One of my goals is to be not only the best recycler in Camden County but the best in the state of New Jersey,” says Cherry Hill Mayor Bernie Platt. But, he says, the town has a long way to go.

In a spring newsletter, Mayor Platt encouraged residents to transform their habits to make the environment a priority. He outlined a 10-point Green Action Plan that was passed by the Town Council in March. One of the points is to expand the RecycleBank program through the entire township beginning the week of June 30.

So far, only 950 households participated in a pilot program that started last October in one section of Cherry Hill. Now the suburban neighborhood’s wide, quiet streets are dotted with bright blue bins lined up alongside garbage cans. Over six months the pilot area’s recycling rates almost doubled.

RecycleBank influences people to recycle more because it uses convenience and incentives to motivate them.

“You have to make it easy for people, or they’re just not going to do it,” says Lisa Pomerantz, a spokesperson for RecycleBank. The 96-gallon bins provided by the company hold about three times more than Cherry Hill’s old bins. Wheels and a lid also make it easier to maneuver a full load to the end of the driveway.

Excellent-
Luckily we have a similar system here in New Braunfels, Tx
all recycled material in one container-easier on the populace

Great writing! More we talk about the issue of recycling, more people will be urged to do so. Natalie, what about publishing your article in the local Cherry Hill newspaper?

Natalie this is great! With all of the “green” information out there, people need incentives to do the right thing. nice article.

In Cherry Hill we received the RecycleBank containers recently. It is a good idea that is poorly implemented. The blue bins are big commerical 96 gallon containers that disabled and elderly residents cannot use. Mayor Platt’s aid Matt Toyer has public stated that there is “no alternative” and “get a neighbor” to haul your recycling. Cherry Hill residents will soon be picking up the tab for an Americans with Disability Act lawsuit because of this program.

These blue bins detract from the neighborhood astetics because no one has room to store them in the garage.

I am not anti-recycling. But, there has to be a better way — these containers are just to darn big.