Cozy yet hungry or uncomfortable but full?

The choices made by fruit fly larvae may provide basic understanding of how animals make decisions. 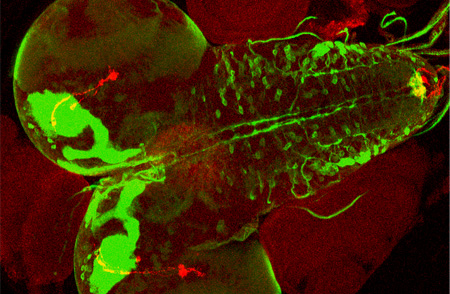 The brain of a fruit fly larva, stained with a fluorescent protein to highlight the mushroom bodies. [Credit: Jonathan Leventhal]

** Editor’s Note: The staff of Scienceline is taking a short break to work on future stories. This article originally appeared June 18, 2008.**

Squirming, white, wormlike and smaller than a pencil point, a fruit fly larva wanders across a petri dish. The light is unbearable, so it heads for the dark half. But it can’t resist the mouth-watering smell wafting over from the light side and wriggles deliberately back towards it. In a complex human world, this dilemma might seem meaningless, but it’s the kind of choice that fruit fly larvae must make, between the desire to eat and a phobia of light.Studying this choice, says Justin Blau, a biologist at New York University, is a tool for seeking a decision-making center in the brain of the fruit fly larva.

Most animal decision research has focused on learned behaviors. For example, primates have been taught to recognize certain shapes and choose the one that earns them a reward. But Blau’s project highlights innate decision-making and focuses on a fundamental question about a rudimentary choice: How do larvae integrate sight and smell information into making decisions?

Scientists do not yet understand what happens in an animal’s brain when it makes choices, and no one is certain whether a decision-making center even exists. Blau’s results may create a basic framework for the process of decision-making and help clarify how animals, big and small, make choices.

“We don’t really know how the brain works. We know there are neurons that signal to one another, but we don’t understand how it performs the calculation to make the decision,” says Blau. Scientists have identified several brain areas in primates that seem essential for decision-making, but nobody can describe the wiring behind it all. Even in the simple fruit fly larva, decision-making on a nitty-gritty level is a mystery.

Inside the Tiny Brain

Some people, says Blau, would not consider the larva’s choice between the two sides of the petri dish a decision at all. But scientists have shown that leeches, creatures just a bit higher up on the scale of complexity, choose to swim or crawl depending on the depth of water. That finding challenges the conventional view that invertebrate behavior follows a predictable path. The leeches actually evaluate their surroundings to determine how they’ll move through the water.

Paul Glimcher, who studies primate and human decisions at the Center for Neural Science at NYU, believes that if Blau can demonstrate that decision-making is rich and complex even in the fruit fly larva, he would show that some of the simplest invertebrates are more sophisticated than we think. Fruit flies are so often the subjects of life sciences research because their behavior is complex enough to be worth analyzing, but their plain biology and well-studied genetics make them easy to work with.

It may seem counterintuitive that a simple organism can give us insight into the most complex ones. But discoveries in the fruit fly have revealed the genetic underpinnings of many human behaviors and body functions, such as genes that drive our biological clocks. “There is no doubt that the mechanisms of decision-making in flies will be different, but they will likely reveal basic organizing principles that occur in all animals,” says Glimcher.

There are two ways to look at how animals make decisions, according to Blau. One theory is that an animal’s nervous system is hardwired to compare all the possible combinations of sensory stimulation, such as specific intensities of light and precise odor concentrations. An action from a catalog of responses would be triggered by whatever circumstances an animal encounters.

Or, if there is a decision-making center, there’s no need for a predetermined response to every single sensory combination. Such a center would serve as a hub, bringing many sensory streams to one location where they could be compared. After some information processing, which Blau says is not understood very well, a behavioral response would result.

The center, says Blau, is a more attractive idea for scientists because it allows more flexibility for biologists to figure out how different factors affect decision-making. For example, they could more easily fit the concept that memory influences decisions into this framework, rather than into the hardwired theory.

Michael Shadlen, who studies decision-making in primates at the University of Washington, thinks that mammalian brains have specific circuits for inputs of information, such as vision, and the corresponding outputs, or resulting actions. These run in parallel to the same kinds of circuits for other sensory information. Decision-making does not happen in a central location, he says.

Glimcher, of NYU’s Center for Neural Science, is not sure if Blau’s research will lead to the discovery of a decision-making center, but he hopes it does. He says mammals seem to have a group of centers that interact. If a center is found in fruit flies, it might accelerate human studies because there are many similar molecular and cellular mechanisms in fruit flies and people, he says.

Fruit fly larvae are ideal subjects for this neurobiological research because Blau’s team can use large numbers of them and easily disable parts of their brains. Monkey experiments aren’t as easy to do because they are more expensive, and human experiments raise ethical issues.

In the lab, a typical caterpillar-like larva eats nonstop as it tunnels through its smelly food. Jonathan Leventhal, a recent graduate of NYU, had to wash the food off many larvae to prepare them for the decision-making tests he ran in Blau’s lab as an undergraduate research student.

Leventhal used a paintbrush to transfer larvae from their baths to the middle of a petri dish, half of which was covered and the other exposed to light. He watched the larvae for 10 minutes and recorded how many were on each half of the plate.

One side offered the comfort of darkness, while the other held a chemical that smells like food. The larvae made a decision, sometimes immediately and sometimes after exploring, to either stay cozy in the dark or brave the light to reach what they believed to be food.

Under normal indoor lighting, about 70 percent of the larvae went for the food on the light side. The rest chose darkness.

As the conditions changed, so did the results. Under intense light, more larvae ended up on the dark side. The food smell is apparently not appealing enough to overcome their light phobia. With dim light, more ventured towards the odor. Leventhal also changed the concentration of the chemical for different results. A stronger odor drew more larvae to the light side, while a fainter one kept them in the dark.

This experiment showed that the larvae weigh the two stimuli, light and odor. They are not just responding to one environmental cue but combining information about both.

So far, according to Blau, no one understands how this happens, but some other scientists are also exploring the issue. For example, researchers in Japan are measuring how adult flies respond to certain stimuli in deciding which direction to move.

Rebecca Yang, a post-doctoral student at the University of California, San Francisco, found that mother fruit flies choose bitter-tasting areas to lay their eggs even though they prefer sweet ones for eating. She sees a cost-benefit evaluation going on in the brains of her flies. Yang hopes to find the genes and neurons that control the flies’ egg-laying choices by manipulating certain genes and observing the effect on the flies’ behavior.

Blau’s lab also plans to use genetic manipulation but first used chemicals to change the larvae’s brains. In the first stage, Leventhal had tested normal larvae. To find out if a certain region of the brain was responsible for the decision between light and odor, he next had to disable that part and see what happened. If the behavior of larvae in the petri dish went awry, he would know that region plays a role in decision-making.

The first target for destruction was the mushroom body, an area of the larval brain related to higher functions like learning, memory and sleep. It is also the site to which both vision and smell receptors lead.

Blau’s next step is to test other areas of the brain. One way to screen candidates for a decision-making center is through genetic crosses that can make the neurons of each area less or more excitable, thus reducing or increasing its function.

If this leads to confused and random behavior in the light and odor experiment, that means the genetically altered brain region may be involved in decision-making.

Though Blau’s research is still in very early stages, it could provide a backbone for ways to study behavior in more complex animals. Since it’s not an easy or ethical option to turn off parts of a human’s brain, the simple fruit fly larva will have to do for now.

The voter’s curse: Why you might not vote for the thing you actually want

Listening to the primate brain

Unbelievably! Who could even imagine that this fruit fly larva has such a complicated brain. Very interesting! Good luck to these researchers!