“The Science of Fear”

A review of Daniel Gardner's book about the fears that shouldn't consume us. 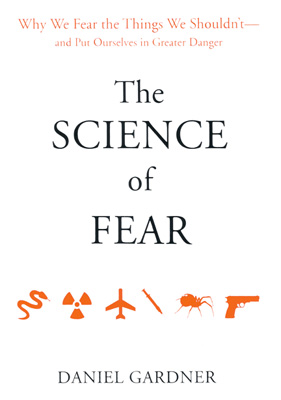 A book that explores our human relationship to fear.
[Credit: Eric R. Olson]

The Science of Fear: Why We Fear the Things We Shouldn’t–and Put Ourselves in Greater Danger (U.S.)

Risk: The Science and Politics of Fear (UK, Aus, Can)

As President Franklin Delano Roosevelt said in his 1933 inaugural address, “The only thing we have to fear is fear itself—nameless, unreasoning, unjustified, terror—which paralyzes needed efforts to convert retreat into advance.” Roosevelt referred to the panic of that era, the Great Depression, but his words sound a chord today as our own uncertain times challenge us economically, politically and environmentally.

The causes of such paralyzing terror are the subject of Canadian journalist Daniel Gardner’s new book The Science of Fear. The U.S. title, however, is a bit misleading. This book is not really about the biochemical mechanisms underlying the feeling of fear, but instead about human failings in the perception and prioritization of risk. Gardner asserts that our greatest fears are often unfounded, and that a heightened perception of risk provokes political and monetary responses disproportionate to the likelihood that something bad will happen. Throughout the book, Gardner hammers home the idea that just because something bad can happen doesn’t mean it is likely to.

In the first several chapters, Gardner uses existing scientific evidence to make the case that our brains have two mental systems: a rational and reasoning “Head,” which can appreciate abstract concepts such as logic and statistics, and an intuitive “Gut,” which is much more primitive and quick to make judgments. He says that Gut is a well-honed system but out of place: It evolved over hundreds of thousands of years to deal with life on the plains of Africa, where risks such as predators are concrete and immediate, not in cities under the bombardment of reality-distorting words and images. He brilliantly characterizes Gut as “a caveman who wants to drive” and Head as “a bright-but-lazy teenager” riding shotgun, who occasionally but reluctantly takes control of the wheel. Despite rationalizations from Head, risk perception is much more the domain of Gut, our inner caveman.

In the second part of the book, Gardner debunks the roots of our fears today and those of years past, including crime, terrorism and environmental contamination. He shows us that once we crunch the numbers and look at actual risk, the world isn’t nearly as scary a place as some would make it out to be. Gardner cites the 1990s silicone breast implant scare that, due to biased media attention, had the public, as well as the courts, thinking that implants cause immune disorders. He uses Rachel Carson’s influential book Silent Spring to show how a misleading use of statistics can lead to wrong-headed conclusions about the link between chemicals in the environment and a rise in rates of cancer. And he points out that the “if-it-bleeds-it-leads” mentality of the modern press gives people a disproportionate sense that crime is on the rise, even though the absolute rate of violence has been falling for the past thirty or so years.

Gardner takes politicians, corporations, journalists and activists to task, showing us how they manipulate the Gut system, blowing small risks out of proportion and inducing fear for political and monetary gain. He doesn’t stray too far into condescension (with the exception of an excoriating section about the Bush administration), instead hewing closely to numbers and the well-reasoned views of those more qualified than himself. Gardner cuts journalists the most slack, perhaps because it is his own profession, and he cites journalists’ natural human inclinations as one reason why they tend to focus on compelling stories to the exclusion of hard data. But “Anecdotes aren’t data,” he writes, “no matter how moving they may be or how they pile up.”

Although The Science of Fear is a sharp and compelling look at the human relationship to risk, there are a few soft spots. Gardner is generally deft at navigating the reader through the science, but some sections feel a bit long-winded. He guides us through the detailed mechanics of multiple studies that all essentially prove the same point. Near the end of the book, Gardner seems to contradict some of his own arguments when he ventures into the risks involving nuclear terrorism. He writes, “In the absence of data all we can do is look at the complex facts about construction and availability of nuclear weapons and make a judgment call.” Although he may be correct, it is a hard pill to swallow after he has relentlessly driven home the point that a rational appraisal of statistics and numbers are the key to a true understanding of risk.

In general, The Science of Fear presents an optimistic view of the present and future of the human race, but proclaims that we must overcome the limits of our biology to gain a complete and accurate view of the risks in the world around us. Gardner implies throughout the book that we live in safe times, and he concludes the book with a chapter devoted to the idea that these may, in fact, be the safest times in which humans have ever lived.

Oxytocin: the hormone that manipulates trust

Are we more vulnerable than ever to deadly epidemics?

Why is Iran taking so long to make a nuclear weapon?

Comprehensive and clear review. Made clear what the book is about. After reading Gardner’s work, I can only agree with the writer of the review: a great read!