A Home for Hobbits

As short as they are enigmatic, the three-foot-tall “hobbit people” have provoked controversy since the 2003 discovery of their fossilized remains on the Indonesian island of Flores.  No one knows […] 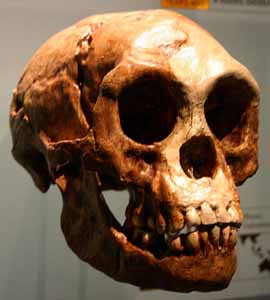 As short as they are enigmatic, the three-foot-tall “hobbit people” have provoked controversy since the 2003 discovery of their fossilized remains on the Indonesian island of Flores.  No one knows quite where to connect Homo floresiensis, as anthropologists have dubbed the “hobbits,” to the ancestral hominid tree, or even whether they deserve a separate branch.

Some researchers think they may just be a group of short humans with abnormally small heads.  But 3-D models of fossilized skulls are helping to make the case for the “hobbits” as a distinct species in our evolutionary history.

Their brains, which are small even when compared to their stature, lead some scientists to believe they were small humans with a neurodevelopmental disorder known as microcephaly, in which the brain does not fully develop.

Now researchers, using computer simulations, have shrunken the skulls of several hominid species including modern humans and Homo erectus, our distant relative, to show what they would look like at hobbit size.  They found that the cranial shape and body size of Homo floresiensis are inconsistent with any other known species, according to a recent paper published in the Journal of Human Evolution.

That strengthens the argument that Homo floresiensis is a distinct species worthy of its own branch on our family tree.  But where to stick that branch remains a mystery – the “hobbit’s” evolutionary history is still hidden in the fossil record.

The dinosaur’s rise to pre-meteoric dominance.

How paleontology helps us understand the human body.

I’m not an anthropologist, but it seems to me that it is very difficult to base on argument on one data point. To what degree is the skull representative of the average population? Well with only one data point there is no way to calculate a meaningful standard deviation. I think the arguments that are based on the rest of the skeleton (from which as many as six samples exist) are much more coherent. Hopefully more skulls will be found that in time will provide more statistical weight to the discussion of brain size and species.

My family has abnormally large heads but I think we’re still humans!